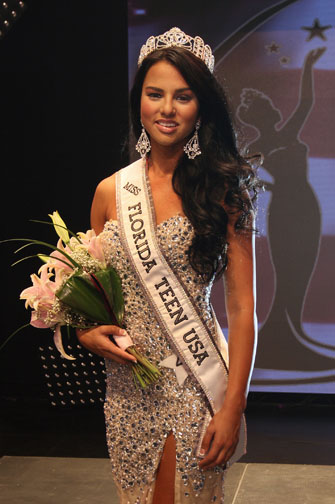 FORT LAUDERDALE — Jara Ann Courson entered the Miss Florida Teen USA pageant so she could communicate her message of self-empowerment to youth. Like many young girls, Jara was bullied at school.

“I was a target for mean girls because I was an insecure introvert for a while,” she said. “I was teased and made fun of; it got to me. My parents were my biggest help. They always told me I was beautiful and nothing was wrong with me.”

The judges agreed. They named Jara the 2015 Miss Florida Teen USA winner. In just the second pageant she ever entered, Jara, a Seminole descendant and enrolled member of the Choctaw Nation, became the first Native American to win the title, said pageant officials.

“I’m absolutely thrilled and I can’t wait to see what this year has in store for me,” said Jara, 17, a senior at Columbia High School in Lake City. “It was the most exciting thing ever.”

Fifty-seven girls competed in the pageant held Oct. 17-19 at the Parker Playhouse in Fort Lauderdale. Jara will represent Florida in the Miss Teen USA pageant in the Bahamas in July.

The bullying experience taught Jara self-awareness, gave her inner strength and made her want to spread the message of self-empowerment, self-respect and self-love. Jara didn’t have a way to share the message and thought a title would give her a platform.

“Who am I to tell anyone what is right or wrong?” she said. “But with this title, my voice can finally be heard and I can talk to kids and convey that message.”

Jara decided to enter a preliminary contest for the Miss Florida Teen pageant just a couple weeks before it was held in April. Her parents, Jerry Wayne and Tara Osceola Courson, helped Jara prepare by asking a slew of questions that judges might ask. They also coached her about stage presence and critiqued her as she practiced the one-minute speech she wrote about self-confidence.

“People aren’t always nice and the world isn’t always a kind place,” Tara said. “Having the strength and confidence to face it is an important message to her. I hope she lives this year to the fullest and shares that with everyone.”

As captain of the Columbia girls volleyball team, Jara keeps in shape, but she worked harder than usual and even gave up eating carbs to get into pageant condition. The biggest challenge was learning to style her hair and apply makeup, something she had never done before. YouTube videos and tutorials were all she needed to master it.

The work was worth the effort. Jara’s peers in the preliminary pageant voted her Miss Congeniality, the judges deemed her Miss Photogenic and she won the Miss North Central Florida Teen USA title. She had six months to prepare for the next pageant, Miss Florida Teen USA.

She will earn her associate’s degree before getting her high school diploma thanks to dual-enrollment at Columbia and Florida Gateway College in Lake City. Jara plans to get her bachelor’s degree, a master’s degree in business administration (MBA) and a law degree. Ultimately, she would like to work as a corporate lawyer for the Tribe.

Jara has always been passionate about her culture. She wants to help Tribes stricken by poverty, specifically those living on the Pine Ridge Reservation in South Dakota.

Going through the pageant process was a positive experience for Jara, who made new friends and opened more opportunities for her future. In addition to being Miss Florida Teen USA and attending school, she plans to start blogging about self-confidence and self-empowerment.

“I met other girls who are ambitious, smart and kind. That’s been amazing,” she said. “I’m really excited knowing I have a platform to make my voice louder throughout our state.”

Jara said the highlight of the pageant was looking out at the audience and seeing her family and knowing they were proud.

“They’ve been there from day one, of course,” Jara said.

As for those bullies who had such an impact on her life, they are still around.

“I’ve seen those girls since,” Jara said. “Some grew up, some stayed the same and a lot have apologized.”

The lesson she learned is simple.

“In everything – pageants or in life – be yourself, know your strengths, be confident and give your all to everything you do,” Jara said. “My dad always told me not to put in half the effort unless you’re OK with half the results.”