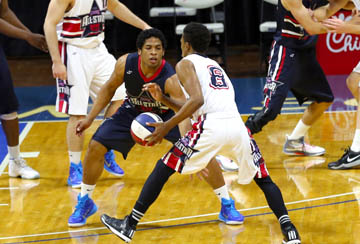 DeForest Carter took a couple more steps in July on his path toward playing professional basketball.

Carter, who concluded a record-breaking career at Embry-Riddle Aeronautical University in March, signed with an agent and attended three professional evaluation camps with the hope of inking a contract with a team this summer or fall.

“I just want to go somewhere where they want me and I can put the ball in the basket like I did at Embry-Riddle,” said the 6-foot-1, 220-pound point guard from Big Cypress after he returned to his residence in Daytona Beach following three days in Las Vegas for the camps. “A good start for me would be somewhere in South America. If I play well and produce, I’d get to go across the ocean.”

Crossing the Atlantic to play in a European league would mean better competition and more salary compared to South America, but Carter said he’s not picky where his pro career starts. He also received an invitation from the National Basketball League of Canada to attend a combine in August and said playing north of the border is among his options.

In Las Vegas, Carter, who is Embry-Riddle’s all-time leader in assists and steals and in the top five in blocks and points, vied with pro players and other former college players trying to impress scouts and agents.

“I was excited and scared at the same time, but once the ball started bouncing it felt like another game,” Carter said. “It was a good mixture of pros trying to go back overseas and college guys coming out.”

Carter played in one or two games each day and attended seminars that offered advice on life as an international pro basketball player.

“Mostly we listened to a guy who told us about his experience playing overseas and how to manage your time going into a new environment,” Carter said. “It was good.”

KSG clients have signed with teams in Argentina, England, Germany, Spain and others.

No matter where Carter ends up, he doesn’t want to put aside his pursuit of a diploma. He is seven classes shy of earning a degree from Embry-Riddle and plans to take classes online if necessary.

“I can continue my education. I don’t want to stop. I want to make both work,” he said.

If he does go to another country, Carter said it would be a good experience to represent the Tribe.

“I want to be a symbol for the Tribe in an international setting,” he said.