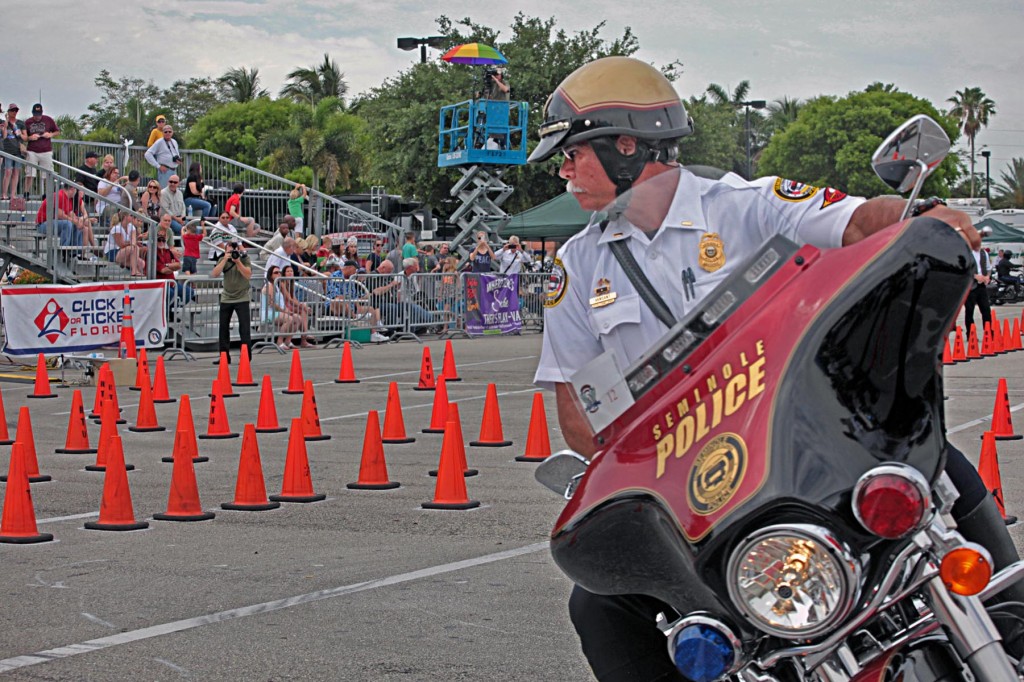 Four motor officers from the Seminole Police Department, including Lt. Mitch VanSant, competed and helped organize the May 3 rodeo.

“This is a great turnout,” said VanSant, who helped start the event 25 years ago with other officers. “We do this to raise money for C.O.P.S. [Concerns of Police Survivors]. Over 25 years, we have given more than $500,000 to the program, on top of having a really good time with other motor officers.”

Every year a Harley Sportster 883 is donated by the factory or local dealers for a raffle. Chester’s Fort Lauderdale Harley-Davidson donated the bike this year. The raffle raised about $50,000.

“The officers prepared well to make the event a success,” said SPD Police Chief William Latchford. “They volunteered their time and planned this year-round, along with their other duties. They represent the Tribe in a positive light in the law enforcement world; that’s the kind of heart our officers have.”

The Hard Rock parking lot was transformed into a maze of orange cones. Judges from the Wings of Gold motorcycle club stood at every turn to take notes on each rider, whose objective was to pass through the course as cleanly as possible without touching cones, putting a foot on the ground or dropping the motorcycle.

“You need to go slow and take your time because you get bonus seconds for a clean run,” said SPD Officer Gregg Forsyth. “I hope to have a clean run and not disappoint the team.”

Wearing utility belts loaded with guns, handcuffs, radios, Tasers, flashlights and other necessities of the job, officers concentrated intensely as they slowly rode through the course. Police departments from Maryland, Louisiana and throughout Florida were represented.

“These are some of the best riders in the state and the southeast region,” said Officer Joe Companion, who has worked 11 years for SPD. “If I remain vertical at the end, then I did great.”

Nerves played a part for some competitors, including Officer Erin Young, of Margate, who was happy to compete.

“I could have done worse; I could have done better,” Young said. “It’s nerve-racking the day of the competition. You put yourself in a zone and block off everything that’s around you so your nerves don’t show.”

SPD officers finished in the top 15 to 20 teams overall.

“Everybody wants to win the 25th year,” said Detective James Boudreaux, who has been an SPD motor officer for 10 years, “but there’s a lot of talent out here.”