ST. MARKS — More than 150 years after young Seminole Indian Emateloye (Polly Parker) escaped her U.S. military captors here, hid in the palmettos, then evaded a hunting posse for more than 300 miles through the snakes and panthers and thick Florida outback all the way back home to Lake Okeechobee, she will be officially honored for her defiant act.

Fully aware of Polly Parker’s legend and importance to the survival and history of the Seminole Tribe of Florida, Florida Secretary of State Ken Detzner, St. Mark’s Mayor Charles Shields and City Manager Zoe Mansfield are proposing Polly Parker Park, located only a short distance from the St. Mark’s River where the Grey Cloud steamboat, filled with captured Seminoles, would stop for fuel-wood on the way to deported Indian lands out west.

“This is an honor for our city to create this park in the name of Polly Parker and everything she represents to all of us who love our freedom,” said Mayor Shields, who hosted Seminole Chairman James E. Billie, Tribal Executive Administrator Danny Tommie, Ah-Tah-Thi-Ki Museum Director Paul Backhouse and Assistant Director Anne Mullins at a special City Hall meeting in mid-July to announce the project.

“I’ve heard about this place all my life,” said Chairman Billie, who acknowledged that Polly’s escape from the deportation voyage was directly responsible for the survival of the Seminole Indians in Florida: “There were special genes coming down from Polly Parker. Most of her descendants, to this day, are geniuses, real smart people, especially politics-wise.

“There is a lot that has been told about this one woman and how she came through the swamp,” he said. “I heard many stories passed down about her. I’m happy you all are pursuing this project to let everyone know who she was and what she meant to the Seminoles and to Florida.”

During the Seminole Wars of the 1800s, many captured Seminoles were kept imprisoned at Egmont Key (off the coast of St. Petersburg) where the Grey Cloud would pick them up and steam across the Gulf and up the Mississippi, where they were disembarked to join the Cherokee and other Southeastern Indians in the infamous Trail of Tears forced-march to Oklahoma.

It was routine for the steamboat to stop in St. Mark’s to pick up wood to burn for fuel, before heading west toward New Orleans. It was on one of these stops that Polly Parker jumped ship. She made it back home and lived past 100 years old before she died in 1921.

For Secretary Detzner, who spoke fondly of his memories of riding his bicycle from Tallahassee to St. Marks daily while a student at FSU, the ongoing transformation of St. Marks from an industrial town to an ecotourism destination “couldn’t make me happier. This is a special place, but we have to be careful. This community is just beginning to be modernized and when it does change – and it will, based on Florida population growth – we want it to be the right thing. Polly Parker Park is the right thing.”

The plan, as Detzner described it to the meeting attendees (which also included State Department Legislative Affairs Director Christie Fitz-Patrick and State Historic Preservation Officer Timothy A. Parsons) would be to tie together the (inactive) St. Mark’s Lighthouse (now undergoing a grant-financed restoration) and the Fort San Marcos de Apalache, a 1500s structure with the proposed Polly Parker Park.

“This all started to evolve after the group from St. Petersburg came up here,” said Detzner, referring to the 2013 re-enactment of Polly’s trip from Egmont Key to St. Mark’s. 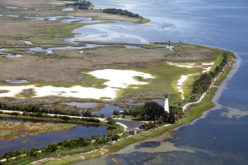