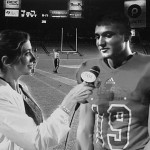 TAMPA — Justin Motlow recently finished his high school football career as one of the nation’s top gridiron athletes and now awaits a phone call that will map out the next chapter of his life.

“Yes, we are waiting for the phone to ring. It’s very exciting. We’ve had several calls and contacts from college recruiters,” said proud mother Lisa Motlow. “Really, it is just a matter of time.”

Justin Motlow, a Seminole Tribal member and All American wide receiver for Tampa Catholic High School, finished the season with 68 receptions and 1,151 yards receiving for the Crusaders. The team fell in the state playoffs to the eventual state champions, Jacksonville Trinity Christian High School.

He was also the team punter, averaging 40.64 yards for 45 punts his senior year.

“He could play with any team, anytime as a punter,” Lisa Motlow said. “His coach told us that he saved the team numerous times with punts.”

The very last play of his high school career is one he will remember, he said, referring to a jarring helmet-to-helmet crash with a Trinity defensive player that laid him flat before a hushed crowd.

“I had a headache for a long, long time after that hit,” Justin Motlow said.

He was helped from the field, examined by the team doctor and sidelined, while his team finished the fourth quarter on the wrong end of a 20-11 score.

“We were worried but all the tests showed that he had not suffered any concussion,” Lisa Motlow said. “He had the headache, but he also had a big bruise on his thigh that happened on the same play that seemed to bother him more than anything else.”

Justin Motlow, who maintains a vigorous daily workout regimen, made it back onto the field for the prestigious Blue-Grey All American Game at Raymond James Stadium (home of the NFL Tampa Bay Buccaneers) Jan. 11.

A member of the South squad, he snagged a 44-yard pass in the first quarter which led to the South’s first touchdown and a tough 25-yard crossing pattern grab, in heavy traffic, near the end of regulation. The play led the team to a game-tying touchdown on an ensuing play just before the buzzer.

He caught four passes for 87 yards. He also made a game-saving tackle following an interception.

Motlow was instrumental in leading the South, which had trailed 41-7 in the third quarter, on an incredible comeback, winning the game in double overtime, 47-44.

Neither Lisa Motlow or husband, Clarence, want to discuss too much about their son’s chances for a major college athletic scholarship.

At least not now.

“We are fielding a lot of calls and inquiries, and we’ll have something to announce soon, I hope,” Lisa Motlow said. “He’s a very good boy – a great representative of the Seminole Tribe.”