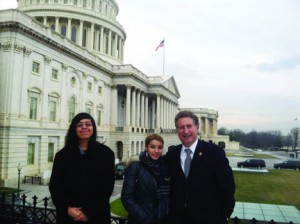 WASHINGTON, D.C. — The Close Up Washington program is more than just a sightseeing trip to the nation’s capital. It is a tool that prepares high school students for leadership roles.

From Feb. 2-8, 17 Tribal students participated in the program, which coincided with the United South and Eastern Tribes’ (USET) annual impact meeting.

Students from different Tribes attended the program, where they learned leadership skills and how to become active participants in a democracy. USET held workshops for the students, including a mock Tribal council, in which they worked together with their peers from other Tribes. Students also met with the U.S. Department of the Interior’s Assistant Secretary of Indian Affairs Kevin K. Washburn and the U.S. Senate Committee on Indian Affairs to discuss issues facing Indian Country.

“We got to go to Capitol Hill and attend a meeting of senators who were discussing the debt ceiling and the Violence Against Women Act,” said Alexis Aguilar, 18, of Immokalee. “They talked about the different versions of the bills. I feel privileged to have seen the process. Not many people get to see that.”

The USET portion of the program also included a Tribal Action Initiative, an exercise in which the students had to identify an issue on their reservation and come up with a solution. The Tribes all face similar issues, including drug and alcohol abuse, high drop-out rates, lack of knowledge about Tribal government and the threat of losing their language and culture.

“A lot of our people are on drugs and alcohol right now,” said Tyler Baker, 18, of Hollywood. “The problem is our youth [don’t] have self-confidence in what they are doing. If we can get them to find their confidence and learn something they can be good at, they will get off the drugs.”

The highlight for some students was the USET activities, while for others it was the chance to meet one-on-one with a U.S. Congress member at work.

Jonathan Frank, 17, and Brianna Blais-Billie, 16, were scheduled to meet Democratic U.S. Rep. Joe Garcia, of Florida’s District 26, which covers Monroe and portions of Miami-Dade counties. When they got to his office, Garcia was on the House floor debating immigration policy. They watched on closed circuit TV and afterward ran into him in the congressional cafeteria. Garcia graciously talked to the students and took them on a tour of the underground tunnels that lead from the congressional office buildings to the Capitol building.

“He even let us ride on the congressmen’s train,” said Frank, of Hollywood and a senior at Hollywood Hills High School. “On the train, he told us about the history of the Capitol. When we got there, he went inside to vote.”

“It was interesting to go through the tunnels where the public isn’t allowed,” Frank continued.

“The experience was pretty crazy,” said Blais-Billie, of Hollywood and a sophomore at Pine Crest School in Fort Lauderdale. “It was scheduled wrong, but he talked to us on the way to his next meeting. It was surprising because it showed he really cared about what is going on with the Tribe and in Indian Country.”

Throughout the trip, students squeezed in some sightseeing at the monuments around D.C. and went to the National Museum of the American Indian as well.

“At the Native American museum, it was interesting to see how people outside of our culture see us,” Blais-Billie said. “It was nice to see a lot of people there and that they care about our people.”

Chairman James E. Billie also met with the students and talked to them at length about Seminole history, responsibilities and involvement in their Tribe.

“Talking about being unconquered, 300-400 people survived and they call you unconquered,” Chairman Billie said. “The truth of the matter is the soldiers got tired of chasing us and we survived in the swamp.”

He told the students if they don’t go to college, they should consider the military. He also talked about individual fiscal responsibility.

“You have to learn to use your money correctly,” he said. “A big ol’ fancy Humvee will get you there, but a [Ford] Focus will, too.”

Leadership was also on his mind.

“There is someone in this audience who will start figuring out how to become the next leader,” Chairman Billie said. “One day something will happen and you will think you can help people better than those old goats…If you ever run for politics, you have to have the strength to face the challenge. Not everyone will like you, but you will have to get along.”

The Chairman’s visit resonated with the students.

“He told us even though we are teens, we are very important to the Tribe,” she said. “It made me have a self-esteem boost. Even though I’m young, I still have a voice in this community, this Tribe and this world. No matter how small you are, you can have a great impact.”

Education adviser Reggie Belizaire said the week’s message will serve the students for years to come.

“The students gained experience by seeing democracy in action and learned they can apply those things to their Tribal nations,” he said.