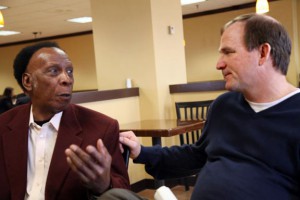 TALLAHASSEE — James Joseph Richardson, the migrant fruit-picker who was put on Death Row and 21 years later exonerated for the murder of his seven children, takes his fight for compensation to the Florida Legislature this session.

He has been seeking reparation for the wrongful arrest and conviction since 1989, when a Seminole Tribune investigation led then-Gov. Bob Martinez to assign a special prosecutor to look into charges that Richardson was railroaded.

That prosecutor, Miami-Dade State Attorney Janet Reno, conducted an extensive investigation that resulted in a nolle prosse of the charges, a legal maneuver that immediately wiped the episode from Richardson’s record and restored all his rights.

“He should never have been charged,” Reno concluded at the time, in a decision that was heavily criticized in rural DeSoto County. It was in Arcadia, the county seat, where Richardson’s children collapsed on Oct. 25, 1967, four in nearby elementary school classrooms and three at home with a babysitter. The story led CBS News that evening and brought in reporters from around the world.

Autopsies found the children had eaten a breakfast of head cheese laced with the deadly insecticide parathion. Richardson and his wife, Annie Mae, were miles away at the time, picking fruit. The babysitter, Betsy Reese, had prepared and served the children breakfast, but was never charged. Then-Sheriff Frank Cline and the late State Attorney Frank Schaub put together a case that accused Richardson of killing his children to collect money from an insurance policy he had just purchased.

The fact that Richardson actually did not have insurance was suppressed from both the grand jury and the trial jury; a deposition given by the local insurance man was hidden, among other exculpatory documents, in an assistant prosecutor’s desk until the late ’80s when The Tribune investigation revealed its existence. Richardson had been moved off Death Row in 1972 during a period when the state banned capital punishment.

He was denied parole several times – at hearings attended by Schaub personally – for lack of remorse. “How am I supposed to have remorse for something I didn’t do?” Richardson said. “I don’t know how to do that.”

Because The Seminole Tribune came out only twice a month, The Miami Herald published the daily stories, as the case began to quickly unravel. The coverage culminated in a Dec. 11, 1988 Herald Tropic magazine issue titled “Poisoned Justice.” The reporters took their findings to Tallahassee and personally delivered them to Gov. Martinez.

After a historic, day-long court hearing in Arcadia – pitting Reno (who would later become U.S. Attorney General under President Bill Clinton) against Schaub, a 30-year veteran and one of Florida’s most formidable state attorneys – Circuit Judge Clifton Kelly released Richardson. Twenty-three years later, Kelly’s son, Lakeland attorney Jim Kelly, remembered that day, April 25, 1989: “It was the single-most dramatic day I have ever seen in any courtroom, anywhere, anytime. You could literally cut the air in that old courtroom with a knife.”

Following his release, numerous efforts to gain compensation for Richardson were fought bitterly by Desoto County lawmen, bristling at sworn accusations from witnesses who said they had been beaten by police into testifying against Richardson. Those depositions included one by a former sheriff’s deputy who admitted, matter-of-factly, to both The Tribune and the Florida Department of Law Enforcement that he beat several witnesses “because the sheriff told me to.”

“This is very much like Pitts and Lee, for me,” said Florida Sen. Geraldine Thompson, D-Orlando, who filed the original bill – SB 194, “Relief of James Joseph Richardson by the Department of Corrections.” She was referring to Wilbert Lee and Freddie Pitts, who were convicted in 1963 by an all-white jury of killing two gas station attendants in Port St. Joe. They spent nine years on Death Row until proof of forced confessions and suppressed evidence led then-Gov. Reubin Askew to pardon the pair in 1975. The case was compounded by a 23-year, racially charged political battle to clear their names and obtain compensation (which they finally received – $500,000 each – in 1998).

“I think that African-Americans, more so than other people, tend to be victims of this kind of rush to judgment,” Thompson said. “So I heard about it and decided that I would file a claims bill. I’m known as a legislator that champions the underdog. I hate injustice.”

Thompson also compared the case to that of store owner Tommy Zeigler, in 1975 in Orange County.

“(He) invited his wife and in-laws to the furniture store for a Christmas Eve party and killed all of them,” she said. “He invited some black men who worked for him to come as well. He shot them and of course he told the police that the black guys killed his family. He had these insurance policies, and, well, he’s in jail. This kind of thing happens all the time, unfortunately.”

Despite the opposition to Richardson’s past efforts to receive compensation, Thompson does not expect that to happen in the current legislative session. She is confident the bill, which asks for $3 million, will pass.

“I think that because (so much) time has passed, and people’s reputations are not on the line – this was under someone else’s watch – I don’t see that kind of activism behind it…But I may be surprised,” she said.

Richardson has been living in Wichita, Kan. since his release. In early March, he traveled to Tallahassee to join his attorney Robert Barrar and consultant Richard Pinsky in visiting legislators to lobby for his claims bill. Tears flowed down his face as he recalled the decades of abusive treatment he received, from guards and fellow inmates, as a “convicted child killer.”

He said he deserves compensation “because I spent so much time in prison. It’s not because of the children. It was the time I had to suffer. I had suffered a painful hate and I almost lost my life inside the prison…After I got off of Death Row, inmates were after me,” he said.

Plans are now being made to bring Richardson back to Arcadia for a “healing ceremony,” said former Mayor and current City Council member Sharon Goodman, who was in class with the Richardson children on that fateful day.

“This town has suffered enough shame, over the years, over what happened to those children and their father,” she said. “We need to move on. Arcadia is a much different place now then it was back in the ‘60s. It’s a wonderful place and we want the world to know we are good people here.”

Cline is still alive, but is rarely seen, in Arcadia.

Now making the rounds of committees, the compensation bill (a companion HB 549 was filed by state Rep. Shevrin D. Jones, D-West Park) is expected to come to the floor for debate in early April. Reno, who is suffering from advanced Parkinson’s Disease, has promised to make herself available to legislators by phone.

For its coverage of the Richardson case, The Seminole Tribune received a Pulitzer Prize nomination and won a Robert F. Kennedy Award, given to the reporters and editor Betty Mae Jumper, by Ethel Kennedy in a ceremony at Robert F. Kennedy’s home in Virginia.