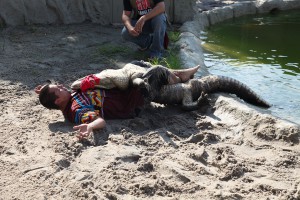 HOLLYWOOD — Tribal member Clinton Holt once again tempted fate on May 9 by performing an alligator wrestling trick that nearly killed him in 2011.

It was the first time Holt performed the head trick since an alligator named Houdini clamped down on his skull more than a year ago, and he did it all to kick off the second annual Okalee Village Pow-Wow’s Freestyle Alligator Wrestling Competitions (FAWC).

In 2009, Holt and his brother James, along with David Weathers and Ian Tyson, founded FAWC to promote alligator wrestling as a sport.

During the kick-off demonstration, Holt jumped into a 6-foot-deep pool – complete with two alligators, a snapping turtle and only 6 inches of visibility – to wrestle the gator out of the water and onto land. It weighs more than 200 pounds, is 8 ½ feet long and has 80 razor-sharp teeth. Gators’ jaws can bite down with 2,000 pounds of pressure.

“I was pretty nervous,” Holt said. “My adrenaline was going.”

Once he got the gator on land, he performed a series of tricks, saving the head trick for the grand finale. The last time he performed the move, he was stuck in Houdini’s jaws for 90 seconds and left with a fractured skull and deep puncture wounds, he said.

“Anything can make that jaw snap shut,” he said, adding that after watching footage from his Brighton performance, he saw that his ear grazed Houdini’s jaw, making it clamp down.

This time around, he successfully did what he said he is known best for: getting his head deep into the alligator’s mouth.

“The biggest pleasure I get is the adrenaline rush, and I love the feeling after the show is done and you’re not bit,” he said.

The FAWC show was open to both Tribal and non-Tribal members who had experience handling alligators and took place on the evenings of May 11-12 during the Okalee Village Pow-Wow, a three-day event that showcased the history of the Seminole Tribe through pow-wow dancing, wildlife and snake shows and a Native American crafts marketplace, among others.

Each alligator wrestler competed in eight-minute sessions and was judged in five different categories: aggressiveness of the gator, difficulty of the stunts, land wrangling, water wrangling and showmanship. The winner, Chris Gillette, from the TV show “Gator Boys,” took home a $3,000 prize.

“[Alligator wrestling] is no longer going to be a sideshow act,” Holt said. “We’re going to make it a more legit sport.”