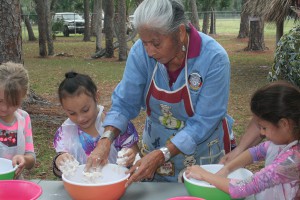 BRIGHTON — A mix of old and new activities were on the schedule for Pemayetv Emahakv Charter School’s annual culture camp from May 2-3.

Students in kindergarten through eighth grade headed to the culture camp at the Fred Smith Rodeo Arena to participate in activities highlighting Seminole culture. The culture camp offers hands-on learning opportunities for students.

The younger students kicked off the fourth annual event with cooking, carving, games and legends. The young girls made frybread while the boys carved soap into objects ranging from sharks to cameras.

“Girls have to do a lot of work,” kindergartner Lexi Thomas said as she mixed her dough. “They have to do all the cooking and cleaning while the boys just carve.”

“Within those games, they are still teaching them,” Culture director Lorene Gopher said. “I do that with my kindergarten kids because they learn quicker that way. They hear it and they know what to do. That’s how they learn.”

Gopher also invited Ollie Wareham, of Hollywood, to participate in the culture event this year as the storyteller. Wareham told animated versions of the two hunters and the rabbit and the lion. He also played his flute.

“I hope they do this on every reservation; this is a great experience,” Wareham said. “You need to know what are your roots, what will you be doing. It’s very important that they learn from my generation. It’s part of being Seminole.”

The second day of the culture camp brought several firsts for middle school students. In the past, students learned how to butcher a hog and cook it. This year though, fish, chicken and swamp cabbage were added to the menu.

Students took turns rotating to different stations where they learned how to scale a fish using just a fork; how to properly cut up a chicken; and how to peel and cut cabbage palm for swamp cabbage. The older girls also took time to prepare frybread, pumpkin bread and biscuits – tasks they have honed during the past four years.

“When I get older and have kids, I want to be able to teach my kids all the things I’ve learned.”

Once all the meat was cleaned and chopped, the girls went to work cooking the food while the boys busied themselves with wood carving. The girls were allotted two hours to prepare the food with little help and supervision.

“We just think that we’ve expanded our program, and we like to think that we taught them enough that they can do this,” Gopher said. “And they are doing a good job now.”

Teachers, parents and members of the community were invited to the culture grounds to enjoy the traditional Seminole meal prepared by the Seminole youth. Brighton Board Rep. Larry Howard was one of the many guests for the occasion.

“You guys did a great job,” Rep. Howard said. “You all are the future role models for the next ones coming up.”