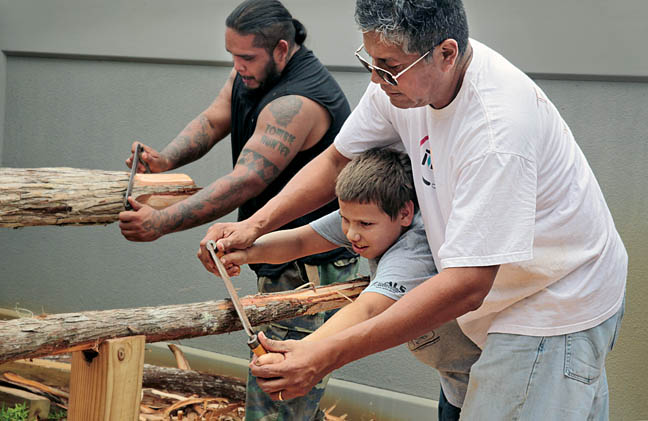 HOLLYWOOD — In its quest to pass Seminole traditions to the next generation, the Hollywood Culture Department recently taught young men and boys the ins and outs of chickee building. They started by collecting raw materials in the Everglades and finished by adding another completed chickee to the culture camp adjacent to the Howard Tiger Recreation Center.

“When we were young, we were told how to make chickees out of necessity,” said Bobby Frank, Hollywood Community Culture Center manager. “I had to learn to build them to make an income.”

Now the objective is passing along the skills and confidence to build chickees. While the group, ages 10 to 24, harvested logs in Big Cypress for the chickee frame, Frank taught them how to identify suitable cypress trees. Later, they collected palm fans in Brighton.

“We are passing along a legacy,” Frank said. “It’s our responsibility to know how to build these because when we get married, we have to provide.”

Frank, Morgan Frank and Milo Osceola mentored the group as they learned to construct the 12-foot-by-12-foot chickee. As they stripped the logs, they learned the blades had to be sharpened often to make the job easier. The group effort with teachers and students often featured two or three people working on a single log.

Holly Bowers made sure her 16-year-old son Rhett Tiger participated to gain traditional skills, among other lessons.

“It’s a good experience and I’ve never done it before,” Rhett said. “I learned what poles to cut and how to peel them. It’s a lot of work, but it’s fun. I’m looking forward to seeing it finished.”

The project began in late July. One chickee has been completed and a second is expected to be finished soon.

Although Aaron Cypress, 24, participated in the class, he wasn’t a novice; it was his third time helping build a chickee. He doesn’t know many from his generation in Hollywood who want to learn traditional skills, but he hopes the project will spur interest.

At age 10, Tanner Gore already realizes the importance of knowing how to build chickees.

“When I get older, it will be good for my own chickees,” he said. “I’m happy that I’m doing it. It feels great.”

Throughout Seminole history, men have been responsible for providing shelter for their families.

“They go into the woods and figure out how to maneuver there and use tools,” she said. “We need to pass it on because the older ones won’t always be around; someone has to learn and pass it on.”