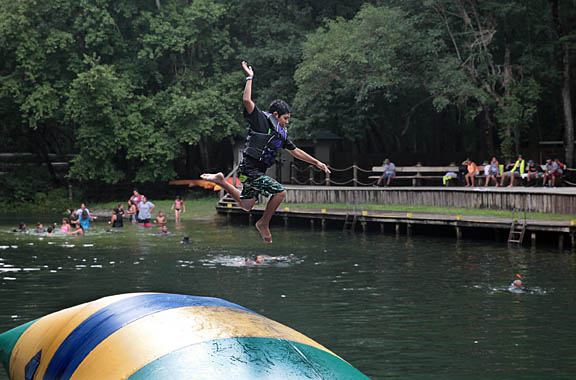 HIGH SPRINGS, Fla. — More than 200 youngsters ages 7 to 17 made memories to last a lifetime at Camp Kulaqua this summer. A week away from home provided campers with fun, facts and the experience of bunking with their peers.

From July 26-31, 97 teenagers started their days in High Springs – about 25 miles northwest of Gainesville – with brisk, early morning walks before they tackled sports, informative classes, water play, culture and crafts.

The camp welcomed 113 younger children who followed a similar schedule Aug. 2-7 with the added fun of the Seminole Olympics and a boxcar derby. Twenty-two teen campers served as junior counselors for youth camp and earned 80 high school service hours.

Both age groups spent a day lazily floating down the scenic Ichetucknee River on tubes and rafts, and both weeks culminated with a talent show where each bunk performed a creative skit for their peers.

“There is no other event where we gather together as a Tribe, other than Rez Rally,” Buster said. “The kids develop relationships; I’ve seen those relationships thrive. It’s different when they spend a week together.”

Nariah Mata, 11, of Lehigh, and Jaime Smith, 11, of Brighton, met for the first time at camp and became fast friends. Both were surprised by the amount of fun they had.

“I expected it to be boring and all learning,” Nariah said. “But it’s fun, really fun.”

“I thought they would be really strict,” Jaime added. “And it’s good to get away from my family for a while.”

The blob, located in the camp’s own freshwater spring, was a popular activity for most of the younger campers, including first-year camper Nakai Alex, 11, of Hollywood. While waiting their turns, kids organized the line into who would “blob,” or jump onto the blob, to launch another camper high into the air above the 72-degree water.

The first day of camp for the young campers was wet and gloomy, but rainy weather didn’t slow them down. Staff brought outdoor activities – such as the ropes course – inside. The children learned to trust each other as they fell backward into their bunkmates’ waiting arms. Cooperation was also part of the learning experience as they held onto each other and piled onto a 2-foot-by-2-foot board anchored by their counselor. And the children learned to provide guidance by leading a blindfolded bunkmate through a maze of “mousetraps” with verbal commands only.

Fun and games were the backbone of camp, but Buster said campers benefited from lessons taught by a variety of Tribe departments and Tribal members. Every afternoon, the camp assembled for classes that included the dangers of texting while driving, emergency exit drills in the home, personal hygiene, stranger danger, storytelling, puberty and life choices.

Lewis Gopher’s powerful “Real Talk” presentation captivated the audience as he spoke about choices and consequences. He told them bad choices, if serious enough, will follow a person for a lifetime. Gopher said he made some poor choices, for which he paid heavy consequences. He asked if anyone knew someone who uses alcohol or drugs, has gone to jail or prison, or died as a result. For every question, every hand went up.

Gopher then told a story about a group of people who lived together and had a specific way of life. Another group came and wanted what they had, so they moved over to give them room. But it happened again and again. They kept coming, but the group stayed together and fought.

“They stayed united and survived,” Gopher said. “Those warriors were strong, had courage, respect and unity. That’s where you guys come from; the blood that was in them, you have it inside you. You can be that strong; all you have to do is let it happen. You are the future they were fighting for because you matter.”

Buster brought the tribal departments to camp so children could bond with adults. Members of the Police, Fire Rescue and Recreation departments participated in every activity; many served as counselors and bunked in cabins with the campers.

The cabins supplied a treasure trove of fun memories for the Tribe’s contingent, but campers also learned what it was like to live with unrelated kids. The 9-year-old girls of Mini Lodge 9 reflected on the camp before they returned home.

“We met new friends and had our good days and bad days,” said Kateri Smith, 9, of Brighton. “We just let it go and stayed out of it when they fought.”

“We had fun wrestling and dancing when we were supposed to be sleeping,” added Kendra Thomas, of Brighton. “The counselors danced, too.”

The boys of Cabin Jay said they will remember their shaving cream fight, going to canteen, the Yo Mamma jokes for the talent show, free time playing in the gym and making new friends.

“The kids who didn’t come to camp missed it, and they need to come next year,” said Jagger Gaucin, 12, of Brighton.

Whether Camp Kulaqua will happen next year remains undecided because of budget cuts, Buster said.

“The teens had the idea to create a petition, which they all signed,” she said. “I told them they have a voice. I will present the petition to Council.”

Buster sees the value of camp and hopes other parents do, too.

“I would send my grandchildren here and pay for it,” she said. “They are taught good values here.”

“I’ll remember how much fun it was,” said Kaden Grimaldo, 12, of Immokalee. “Living in a cabin is fun. It’s like living and taking care of myself. It feels like they are trying to get us to be responsible.”