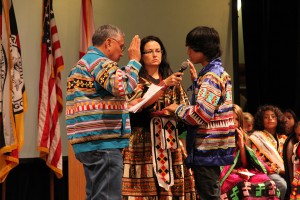 BRIGHTON — Students raised their right hands on Sept. 22 and took an oath to represent their school the best they could at the Charter School student council inauguration held at the Brighton Veterans’ Building.

“When you raise that right hand, it has to mean something,” Council Rep. Bowers said. “If you say you’re going to do something, you do it.”

Elected representatives came forward one at a time, took their oath and then addressed the crowd, giving an acceptance speech in their native Creek language.

Pemayetv Emahakv conducts its Student Council in the form of a mock Tribal Council, giving the students a hands-on feel of what the Tribal government might be like.

“It’s very important to involve the students in the government process because they have to know where and how we came to be,” said Student Council organizer Jade Braswell.

Prior to the inauguration, students had to get a petition and get 10 signatures just like Tribal Council representatives have to do. They then had to give a speech in front of their student body saying why they deserved the position.

Jalynn Jones told students that if elected, she would do all she could to get an art room for the Charter School.

“I decided to run for student council because I knew it would be fun,” Kalgary Johns said. “I didn’t come up with differences; I just told them whatever they thought needed to be changed, that they could come to me and tell me.”

Trevor Thomas, who has been a representative twice before, said he spoke to his classmates during lunch and recess and told them what he could do for them.

“I just feel that I made many changes at our school for the better before, so I thought I could do the same this year,” Thomas said.

“This really finalized that whole piece that actually showed them the road that someone would take to be elected,” said principal Brian Greseth. “They knew what they were doing was important and a responsibility and they accepted that responsibility.”