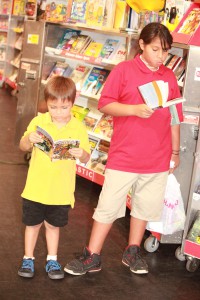 BIG CYPRESS — As Ahfachkee School senior Rowdey Osceola scanned the pages of a book entitled Hunger Games, he noticed a vibe that flowed throughout the Herman L. Osceola Gymnasium on Sept. 29.

Osceola – just one of dozens of students, staff and community members at the Tribal school’s fourth annual Literacy and Book Fair – talked about how proud he felt to have participated in the academic function.

“Reading will help us learn more in school,” Osceola said. “It will prepare us for the outside world, and it allows us to keep our grades up.”

Osceola, who ended up taking the Hunger Games book home with him, discussed briefly how the literary work captured his interest as a student.

“What I like about the book is that it reflects on the Roman way of life back in the day,” Osceola said. “It almost looks like a survival of romance novel.”

Though the Hunger Games theme didn’t exactly represent the school event, it did serve as a popular read with other students and staff members, as Osceola and others discussed the book together at one of the Literacy Fair’s booths. The Literacy and Book Fair’s theme was called “Reading Takes You Places.”

The fair contained more than 10 booths geared toward improving the literacy of the entire Ahfachkee School student body – something that drew much satisfaction from new Ahfachkee principal Lucy Dafoe. In addition to the display booths, the fair also had a costume parade in which all lower-grade Ahfachkee students dressed in a variety of costumes to show their pride at the Literacy Fair. The costume parade was followed by a dinner show, which featured a host of poetry segments, stories and songs performed by many of the Ahfachkee students.

“When Ahfachkee sponsors an event, we need to have our students directly involved,” Dafoe said. “Students practiced poems, stories, songs all to promote literacy and the importance and value of reading. The costume parade allowed students to dress as a favorite character or book and it was fun. It was a chance for the students to showcase student accomplishments.”

Big Cypress Tribal senior Minnie Tigertail, who is the grandmother of 8-year-old Athena Bert, said she was pleased with the turnout and how the event transpired.

“There were a whole lot of books available,” Tigertail said. “You could read anything from science to literature to math. With all the booths at the fair, it seemed like you were going around the world here.”

Tigertail said Bert has made many academic strides in reading.

“The teachers and tutors have been a great help to my granddaughter,” Tigertail said. “Athena really likes to read now and she has a lot of books at home. It is showing in her work at school. She’s been improving a lot.”

As the 2011-2012 academic year progresses, Dafoe would like to see the steady improvement continue in reading with Bert and all of her schoolmates. But for now, the Ahfachkee principal has been happy with the fusion of energy that has taken place in her short time at the Tribal school. In addition, Ahfachkee School officials said they also plan to host an event like this next year for the purpose of literacy enhancement within its student body.

“This was a nice community and school collaborative event,” Dafoe said. “The staff worked hard to make sure the booths, performances and dinner was all ready for the Literacy Fair. I enjoyed seeing the many levels of interaction; family with students, staff with parents, staff with students, family to family. It was an interactive gathering with something for everyone.”