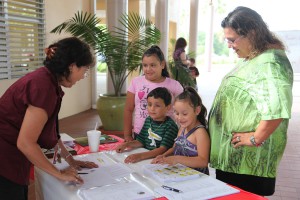 BRIGHTON — Pemayetv Emahakv Charter School bid farewell to former principal Russell Brown during its Open House on Aug. 18. Parents, students, teachers and staff crowded into the school cafeteria to say their final goodbyes to a man who helped make the Charter School what it is today.

“It’s been a great opportunity starting with something from scratch,” Brown said.

Brown was presented with a traditional Seminole jacket donning his favorite colors: orange and blue.

Chairman James E. Billie helped Brown into the jacket and thanked him for all his hard work over the past four years.

“There’s a lot of reasons why I wanted to come out here and work,” Greseth said. “When I come out here, I know parents have a true commitment to education.”

Greseth pointed to the hall of fame wall where pictures of Brighton college graduates hang.

“I’d like to see this whole room full of pictures,” he said. “That will happen in the near future.”

Greseth also commended the staff, calling them dynamite and all-stars. Teachers and aides were introduced by name and position and then filed out of the cafeteria to prepare for classroom visits.

Greseth continued parent orientation reminding parents and students of school policies, including tardiness, and wrapped things up with a thank you and a promise to get to know every student personally.

“I’ve been studying the yearbook,” Greseth said. “My goal is to get to know all the students by name within the first few months.”

Students eagerly left the cafeteria following parent orientation to meet their new teachers and to get their school lists to prepare for their first day, Aug. 22.