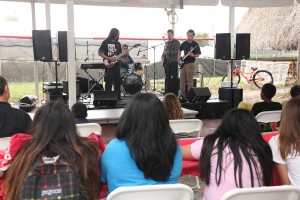 HOLLYWOOD — The Boys & Girls Club offers opportunities for kids to explore their creativity through music.

“We want the youth to focus on something that is positive and encourage them to develop their talents,” said Robert C. North Jr., Boys & Girls Club youth events coordinator. “Music teaches discipline; they have to set goals to learn a song all the way through.”

A few Hollywood kids showed how far they have come in the program at a concert on Jan. 18.

Three performers each played a song, with backup from the Boys & Girls Club staff on drums and guitar. Aaron Osceola, 17, and his sister Anissa Osceola, 16, both played guitar, while Rebecca Vasquez, 15, played bass. The music rocked, and the audience enjoyed the show.

“The goal of the program is to get kids interested in music and give them outlets for individual expression,” said James Payne, Boys & Girls Club music teacher. “The kids get out of it what they put into it. We have kids who work really hard and try to improve, and we have others who start and don’t continue with it. We’re only here as facilitators; it’s the kids who have to do the work.”

Started in 2009, the music program is offered at the Hollywood and Big Cypress Boys & Girls Clubs, with talks to expand to Brighton. Kids choose guitar, bass, drums or piano and get individual lessons once a week. Between 11 and 20 kids on each reservation participate in the program. Although the club had not held a concert in about a year, North plans to hold one every few months.

“The kids were pretty excited to perform but a little nervous,” North said. “They looked forward to trying out new songs. Some talked about getting butterflies, but it happens to everybody. We tell them to do their best and concentrate on their song and they will do fine.”

The concerts normally generate more interest in the music program among other kids and attendance spikes. Plans for the program include a joint concert between the Hollywood and Big Cypress clubs and studio recording workshops.

The chance to learn about recording and producing CDs shows kids who don’t play an instrument that they can also be in the music program.

“We have to stay on our toes and have fresh material,” Payne said. “And we have to keep challenging those kids who have been in the program for a while.”

When they play together as a band, the kids learn teamwork and cooperation. One of the tougher issues is scheduling practices around the young musicians’ other obligations, including school, tutoring and sports. The kids who performed at the concert found the time to practice together.

“The program is growing, and we want to give kids different avenues to explore,” North said. “The idea is to have them be independent thinkers, do their own thing and follow what they are interested in.”