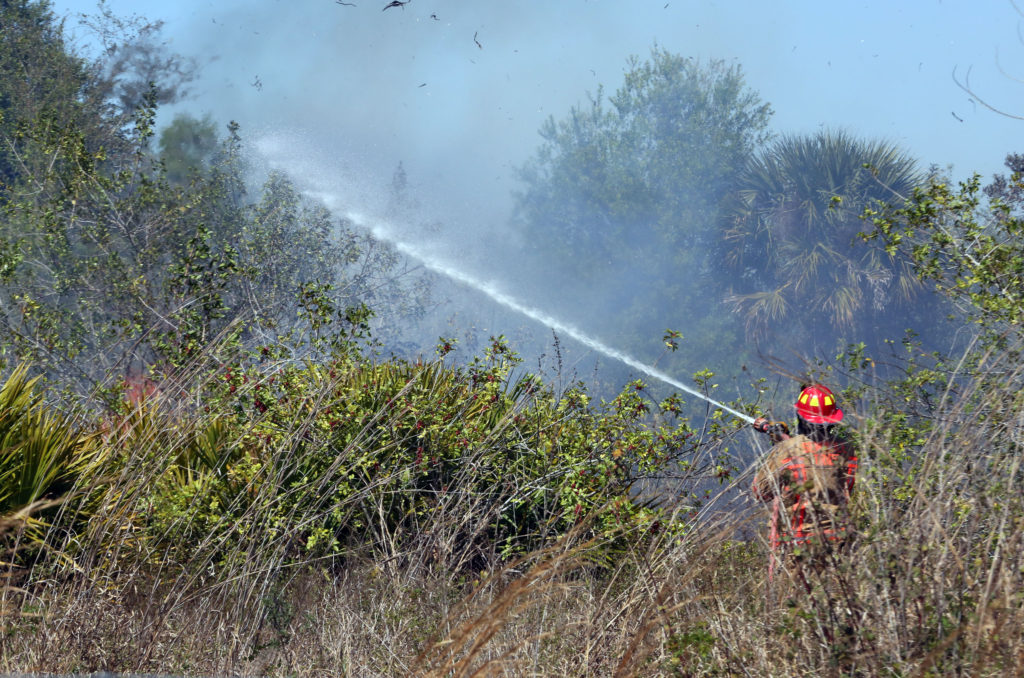 BIG CYPRESS — Since Florida’s severe drought is expected to worsen, the Wildland and Forestry Department led a planning meeting April 26 with other Tribal departments to put a plan in place for the already active fire season.

“Once the el Nino ended, the faucet turned off,” said Grant Steelman, Forester/Fire Management Officer. “That’s great for tourism, but bad for water. The winds have already started bringing lightening and starting fires.”

The dry season typically goes from November through April, but if the National Weather Service’s predictions for below normal rainfall through July hold true, it will be the driest one since 2007.
“Everything out there wants to burn,” Steelman said. “You have to hit a fire fast and hard to stop it.”

Relative humidity can be an indicator of how fires will burn. Steelman said fires burn very well at 60 percent humidity, but in late April the humidity was 40 percent and forecast to remain there through fire season. Vegetation throughout the region is dry as tinder and includes large logs that can burn for 1,000 hours.

“We saw the first fire this season at the end of February and two 20,000-acre fires already this year,” said Steelman, whose crew fought the Cowbell fire in Big Cypress Preserve from early March until early May.

The Wildland and Forestry Department created a simulated fire similar to one that could possibly occur on the Big Cypress Reservation in dry conditions, 50 percent humidity and five to 10 mph winds. Steelman shared the results of the simulation through data and a PowerPoint presentation. In the first six hours, the fire grew to 730 acres and jumped a canal. Six hours later it was 1,530 acres. At hour 18, the fire was 3,549 acres and threatened structures and after 24 hours it was a 4,000 acre fire.

“We wanted to have a picture of what can happen,” Steelman said. “We don’t want to start thinking about fire at 18 hours in.”

Structure protection, mitigation measures and containment objectives need to be in place before a fire ignites.

“We may have 30 minutes or less to evacuate and get people moving,” Steelman said. “It’s not like a hurricane where we get seven days notice.”

He asked each department how they can help in case of a fire and outlined some basic procedures to be followed. An example of action that could be taken is for ERMD to turn on pumps and flood ditches so firefighters can draw water from them.

The rest of the meeting was a brainstorming session on finding a central staging area from which fire, emergency management and police can operate, logistics and ways to engage departments in the effort.

“It takes an hour to traverse the canal in Big Cypress,” Steelman said. “It’s usually a good fire break, but I’ve seen three fires jump I-75 this season so far.”

Ideas that flowed included how field crews from ERMD and THPO can be great smoke spotters. ERMD has 186 fire hydrants that can produce a million gallons of water in 24 hours. Thanks to the work the department has done this year, all are in working order. Pressure can be increased to 900 gallons per minute if necessary. The department will provide a location map of the hydrants.
THPO offered to make maps of trails and roads so firefighters can access fires easier. SPD offered to help with staging, traffic and evacuation.

“We have 95 percent of peoples’ contact information,” said SPD Lt. Victor Madrid. “We can go door to door to Tribal members.”

Emergency Management offered to get the word out through emails, Facebook and Code Red alerts.

“We need a pre-incident action plan to get the framework down,” said SPD Lt. Scott Pardon, of the Emergency Management team. “Our main reason to be there is for Tribal members. We rely on information from Forestry from the front line.”

“Seniors are more apt to respond to a Tribal member or someone in a uniform at their door,” said Big Cypress Board Rep. Joe Frank.

Fire Rescue Chief Donald DiPetrillo agreed that partners in public safety need to talk to each other quickly. His experience has shown that during the first 24 hours, firefighters are usually on their own.

“Life safety is number one, number two is structural protection,” DiPetrillo said. “Then we contain the fire. There are complex things going on and we need one unified command post.”

The talk turned to a recent fire in Naples, during which 100-foot flames burned above the vegetation and even bulldozers couldn’t reach the blaze. Residents were trying to leave as the heavy firefighting equipment was trying to get to the fire.

“It was a safety issue,” DiPetrillo said. “We ran out of people, resources, everything. We were exhausted after 24 hours. We can’t take these fires lightly; they move very quickly.”

The discussion led to who is lead on a fire and who is a liaison. Communication was lacking in the Naples fire, which resulted in uncontrolled chaos and finger pointing afterward.

“We need to be pro-active before an event,” said ERMD director Cherise Maples. “If the fire is someone else’s jurisdiction we could be late to respond.”

Steelman described the national incident command protocol, which is used during large fires such as the Cowbell.

“It takes years to qualify to lead it,” he said. “It is a very structured system. Additional resources are pre-positioned here in Florida, including trucks and equipment. That’s the beauty of the federal framework.”

Since the 1970s the Tribe has had reciprocal relationships with other local fire departments; they help each other when necessary. Having a unified incident command post plus a staging area is critical to successfully managing wildfires.

“This meeting was meant to get people thinking and get a dialogue going so we aren’t scrambling on the day we smell smoke,” said Steelman. “This year we have a long road ahead of us with two months more of watching and waiting.”