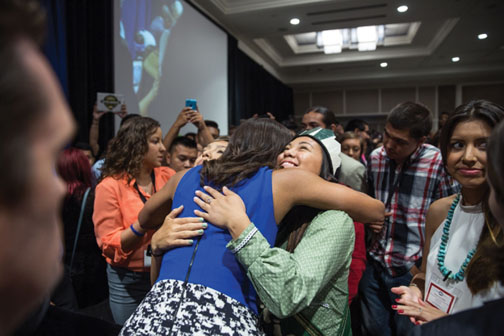 The July 9 gathering was a collaborative effort by the White House, the United National Indian Tribal Youth (UNITY) organization and the departments of Justice and Health and Human Services.

“I’m very excited and also a little bit nervous,” Brody said before the event. “But I think my nerves will go away when it all starts to become real.”

“Real” happened with a full day of frank discussions about severe problems summarized in the president’s 2014 Native Youth Report. The report lists staggering disparities in education, economics and health among young Native Americans compared to youth of other races.

Facts: One in three Native children lives in poverty; only 67 percent of Native students graduate high school and only 53 percent who attend schools run by the Bureau of Indian Education (BIE) graduate; suicide is the second leading cause of death among Native youth 15 to 24 years old; the prevalence of Type-2 diabetes among 10- to 19-year-olds is three times higher than the national average and five times higher than white kids.

And more: Substance abuse among Native students ages 12 or older is highest among all population groups – age, gender and race. In 2013, an estimated 40 percent of Native youth had a lifetime prevalence for substance abuse. In 2012, almost 69 percent of youth admitted into recovery facilities claimed alcohol as the primary substance of abuse.

Cecilia Munoz, the president’s director of domestic policy, said in a telephone press conference July 8 that Gen-I aims “to expand educational, employment, health and social services” for Native youth while their voices are heard, their culture continues and their futures thrive.

“(Native) youth represent the next generation of leaders making significant contributions to their tribal nations, to the cities that they live in, to the United States and to the world,” Munoz said.

Jewell said she finds it hard not to become angry when she thinks of the history of BIE schools and sees the dilapidated buildings. For decades, the system separated families and ignored Indian culture, she said. Now, BIE aims to improve and replace facilities while infusing rigorous academics with rich culture.

Currently, there are 183 BIE-funded schools on 64 reservations. Of those, 126 are tribally controlled and 57 are federally controlled.

The Gen-I initiative, launched by the president during the 2014 White House Tribal Nations Conference, is delivering goals. The new Native Youth Community Projects program provided $1.4 million to seven tribal education departments for school improvements; the new National Tribal Youth Network boasts 1,500 members; $1 million will go to 20 tribal colleges to create programs that will help students from 45 BIE feeder schools get into college; and the BIE has developed framework to make Native language critical to school curriculum.

Since 2013 the president, first lady Michelle Obama and members of the president’s Cabinet, including Jewell and Education Secretary Arne Duncan, have conducted “listening” visits at reservation schools from Alaska to the Miccosukee Reservation near Miami, to help restructure the BIE.

Brody said a heartfelt speech at the gathering by Michelle Obama, who described her visit to Pine Ridge Reservation, was a highlight of the event.

“I know that you can all make the change you seek, day by day, vote by vote, eagle feather by eagle feather,” Michelle Obama told the students while referring to SaNoah LaRocque, of the Turtle Mountain Band of the Chippewa.

LaRocque, a Harvard University pre-med freshman, fought her district school board for the right to wear an eagle feather on her high school graduation cap, though decorations were not allowed on graduation regalia. Arguing that the feather was not decoration but a cultural symbol of strength and honor, LaRocque won.

“The first lady was really emotional talking about [issues] with us,” Brody said. “She was sincere.”

Jewell credited the listening tours for furthering understanding between Tribes and the federal government.

From the visits came the Blueprint for Reform to restructure the BIE. An update on the blueprint, released at the youth gathering, calls to fix “inadequate socio-emotional support networks and an out-of-sync curriculum not tailored to tribal needs or 21st century learning.”

New recommendations for the president’s $1 billion 2016 Indian education budget include BIE funding of $59 million in 2016 for replacement construction at dilapidated schools; $80 million to bolster programs that improve school operations and provide real life opportunities for students; $10 million for projects important to individual Tribes, including $3 million to help with Native language immersion; and $13 million to fund 100 percent of administrative costs at BIE schools operated by Tribes.

When asked what one day at a White House youth gathering would do for a teen from South Florida or South Dakota, Sparks, a member of the Rosebud Sioux Tribe, said she expected the summit to make a huge difference in the lives of the students.

Brody said the tone of the gathering was sometimes tense when issues such as teen suicide were discussed. Panels made up of UNITY members posed difficult questions to members of Congress and Cabinet secretaries.

“Almost all of us in the gathering raised our hand to say we knew someone who committed suicide,” Brody said. “There was an overwhelming request for more and better resources to be given to Indian health services so that youth have access to programs that can prevent teen suicide.”

Jewell said much of her focus since her appointment in 2013 has been aimed at improving BIE services by taking leads from tribal leaders, students and educators.

“The key thing that will come out of [the summit] is people meet each other whether they are from the Seminole Nation in South Florida or from Kotzebue, Alaska, and I think they will recognize they have a lot of issues in common, and I think that pipeline of connections to each other will be a gift that keeps on giving,” Jewell said.

Brody, described by his mother as a “sneaker head,” donated his own shoes and clothing for the fundraiser, dubbed The Sho-Naa-Bish Challenge.

Paul told Brody about a teen basketball player who had been wearing the same sneakers for several years. Paul found out when the boy showed up on the court one day with his shoes untied, he finally outgrew the shoes so much that he could no longer tie the shoelaces.

“It was kind of eye-opening to me, and sad, to find out that another kid needed help like that. He was in real need,” Brody said.

Using the first $300 earned, Brody and Paul purchased two pairs of gym shoes, one pair of Jordan slides and several pairs of socks for the boy. Brody said the charity experience and the youth summit in Washington, D.C. taught him a lesson to share with the Tribe.

“I think that as a Tribe and as a youth that we are really selfish and most of us don’t take into account what’s really going on in Indian Country. So many of us just spend money on ourselves but should be supporting charities that make a difference,” Brody said.