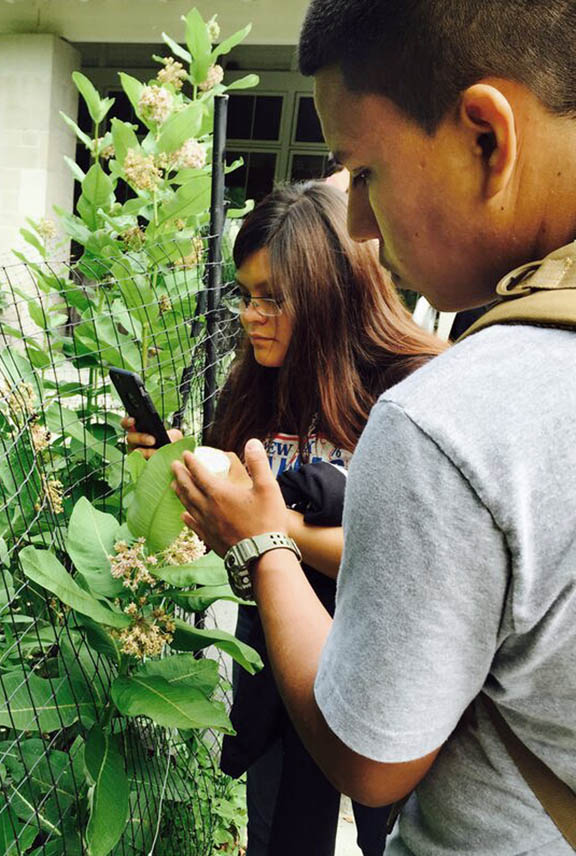 The 89 high school students from 28 tribal communities that span the nation from the arctic Alaska North Slope to the steamy Florida Everglades attended the June 28 to July 3 event in the woods of West Virginia.

Jim Siegel, a biologist with the Fish & Wildlife Service’s Division of Education and Outreach who coordinated the event, said similar meetings since 2009 have been held for teens of all races but the most recent congress was called only for Native students because Native communities are most in danger of environmental devastation.

“It’s ironic that the people who are most vulnerable to climate change are the least responsible … and they are the people with the least political power,” Siegel said.

The six-day gathering featured many small cluster meetings for students to share firsthand accounts of environmental changes that affect their own traditions, land, food sources, medicine and culture.

In a video produced at the event, Navajo teens from New Mexico expressed worry about consistent and severe drought that continues to dry up water supplies and has virtually stopped family farming operations. Alaskan youths voiced concern about melting glaciers that cause flooding, which halts whale fishing for food, energy and commerce. Teens from Hawaii said that higher air temperatures will eventually force the extinction of all indigenous bird species – thanks to malaria-infected mosquitoes that are moving into ever-warming mountaintops.

“[Students] could see how climate change impacts communities differently but that they are all part of the same system,” Siegel said. “It is powerful that they can now say, ‘I have a friend whose family depends on whaling in the Arctic Ocean and how the climate change impacts them and I have a friend in the Florida Everglades whose life is changing because of the same global system.’”

Marsha Osceola, of the Seminole Tribe’s Hollywood Reservation, attended the meetings with teens Donavin Osceola and Morgan Bert, both of Trail. Tanya Williams, an Education Department acting adviser, was the group’s mentor and chaperone.

For Marsha, connecting Alaska’s melting glaciers to rising seawater along Florida’s coast and subsequent salt water intrusion in the Everglades was a no-brainer.

“With water levels rising we’re losing beaches on the coast, which means tourists might stop coming here; and in the Everglades, islands and groves that were above water and used for traditional reasons are getting harder to find,” Marsha said.

Tourism, the state’s leading economic engine, rakes in nearly $82 billion per year but according to the Third U.S. National Climate Assessment, released in May 2014: “Some of Florida’s top tourist attractions, including the Everglades and Florida Keys, are threatened by sea level rise, with estimated revenue losses of $9 billion by 2025 and $40 billion by the 2050s.”

For example, the invasive Burmese python kills and eats indigenous animals that are critical to the ecosystem, such as bobcats, raccoons and birds, at alarming rates, according to a 2011 report from the Proceedings of the National Academy of Sciences.

Invasive plants also wreak havoc. The Brazilian pepper bush, brought to the U.S. as an ornamental, is now spread throughout the Everglades making it harder to find its native lookalike, the dahoon holly, a traditional medicine tree.

Even President Barack Obama, during an April 22 visit to Everglades National Park near the Miccosukee Reservation, acknowledged climate change as an imminent threat to the Florida environment and economy.

“We do not have time to deny the effects of climate change,” Obama said. “Here in the Everglades you can see the effect of a changing planet.”

Students learned facts about climate change and how to build community resilience amid effects that are altering their lives.

Morgan admitted that it was difficult for her, at the beginning, to relate to the problems of teens from other Tribes whose daily lives depend on the environment – such as whaling in Alaska and farming in New Mexico.

“To be honest, as the other kids were telling how bad it is for them, I realized how privileged we are. While other Tribes are losing everything, we still have so much,” Morgan said. “I learned so much from them that now I want to know more about our problems – and I will look into that.”

Siegel said the students were all expected to devise plans to address environmental concerns in their own communities.

Marsha said the Seminole students hope to plan a social gathering for youth ages 13 through 21. There, they will show invasive plant and animal species and tell students how to get rid of them in their own backyards.

“The Burmese python is now at the top of the food chain and the only way to regulate that is to kill them. For the invasive plants? They take the water and smother the other plants; we have to find a way to kill them without using harsh chemicals,” Marsha said.