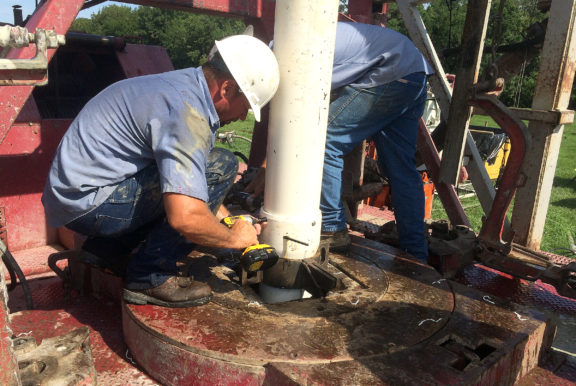 BRIGHTON — The award-winning water provided by the Brighton Public Works Department could get even better thanks to a few deeper wells that will tap into a massive and more productive water source known as the Upper Floridan Aquifer.

Brighton’s water is currently drawn from the surficial aquifer, which is a shallow water source about 40 to 60 feet deep. The new wells will draw water from a depth of about 675 feet.
According to Public Works, the surficial aquifer is what most other municipalities in the geographical area use for source water since it is the highest yielding and of good quality for water production.

“We anticipate the taste will remain the same or be better,” said Cynthia Fuentes, senior civil engineer at the Public Works Department.

Public Works needs the deeper wells to meet Brighton’s high-volume water demand, which includes providing water to the reservation and to the Lakeport community. Modifications to the water treatment plant, built in 2008, are being designed with construction slated to begin in about 18 months. The state-of-the-art reverse-osmosis system will remain in place, but the system’s pipeline route will be changed to increase efficiency, improve operations, and reduce maintenance requirements.

The seven wells currently in use produce an average of about 300 gallons per minute (gpm). More than one well must be used to deliver the required minimum flow of 711 gpm needed for the treatment process, which uses microfiltration followed by nanofiltration to remove impurities. The target flow for the new wells is 711 gpm, which equates to just over one million gallons per day. Fuentes said they expect to use two wells and keep a third for emergencies.

Public Works tribal-wide has earned several honors around the state this year. In April, the Tribe’s Hollywood plant came in second place for best tasting water in AWWA District 6, which encompasses 68 cities in Broward and Palm Beach counties.

In April, all of the Tribe’s wastewater treatment plants—Big Cypress, Brighton, Hollywood and Immokalee — earned second place for safety from the Florida Water Environment Association (FWEA).

The FWEA also presented Public Works Director, Derek Koger, with its prestigious 2016 Thomas T. Jones Public Education Award for “significant accomplishments that foster and support the development of public outreach programs and integrating public education as a core element of wastewater and water utility planning and management,” according to the association’s website.