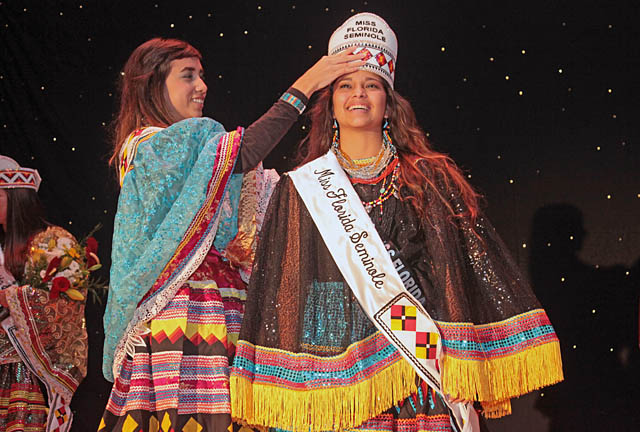 HOLLYWOOD — Seminole royalty is once again all in the family as Brianna Nunez, 18, and her cousin Cheyenne Nunez, 16, were crowned Miss Florida Seminole and Jr. Miss Seminole, respectively, at the 57th annual Princess Pageant held July 26 in Hollywood.

The Brighton teens demonstrated talent, poise, intellect and knowledge of Tribal culture during the three-hour competition at Tribal Headquarters. Six other talented contestants from Big Cypress, Hollywood and Immokalee also vied for the titles.

Brianna beamed while outgoing Miss Florida Seminole Tia Blais-Billie dressed her in the sash and crown.

“I was in awe when they announced my name,” Brianna said. “All the other girls did so well. I wasn’t sure how it would end up.”

Cheyenne’s face also lit up when she won the title. Her smile remained as outgoing Jr. Miss Seminole Brianna Blais-Billie embellished her with the sash and crown.

“I did my best and was pretty confident I had a chance to win,” Cheyenne said. “I’m honored to represent my Seminole Tribe.”

Since 1957, Seminole princesses have served as goodwill ambassadors for the Tribe and have spent their one-year reign traveling, speaking and appearing at events nationwide and overseas. This year’s theme, “Honoring the Path of the Seminole Princess,” paid homage to the role of women in the Seminole Tribe.

“You get to talk to people who aren’t aware of the Tribe,” Brianna said. “You fill them in on who we are and how we became who we are today.”

Rehearsals, lunches, dinners, meetings with judges, more rehearsals, photo shoots, a dress rehearsal and a banquet kept candidates occupied from morning to night. A photo shoot on the bridge over Hard Rock Hotel & Casino Hollywood’s pool gave the girls a taste of the spotlight and caught the attention of guests.

The Princess Committee hosted a welcome banquet at Hard Rock July 25 for about 200 people, including contestants and their families, the outgoing Seminole princesses, royalty from the Seminole Nation in Oklahoma and the three judges – Taylor Thomas, Miss Indian World 2014; Ashleigh Lollie, Miss Florida USA 2015; and Jeff Begay, a retired Vietnam veteran from the Navajo (Dine) Hopi Laguna Tribe in Arizona.

“Once you’re a princess, you’re always a princess; remember that,” said mistress of ceremonies Gloria Wilson, Miss Florida Seminole 1975 and 1976.

Committee chairwoman Wanda Bowers welcomed former princesses and presented the 2014 contestants. Each girl introduced herself to the crowd.

“Public speaking is a big part of being a princess,” said Bowers, Miss Florida Seminole 1968 and 1969. “They gain confidence and learn to think on their feet. In a lot of their appearances they will have to speak, so they have to be prepared. They will learn very quickly.”

On pageant day, the Headquarters auditorium was lined with formal portraits of past princesses, starting with a youthful photo of the first Miss Florida Seminole, Connie Gowen, who was appointed by the newly formed Tribal Council in 1957.

Gowen remains an active member of the Princess Committee. As honorary “grandma,” she serves as a comforting figure backstage while the girls prepare for their big moments.

The competition kicked off with a clothing contest, in which contestants modeled modern and traditional patchwork outfits. Talent followed. Alexis showed off her patchwork skills, Brianna sang and Marissa demonstrated how to create zigzag pattern patchwork. Beadwork demonstrations, storytelling and pumpkin frybread making were among the highlights of the Jr. Miss talent competition.

Pageant rules also required all contestants to answer impromptu questions about Tribal history, structure and ways to improve the community.

The winners of the talent competitions were Thomlynn for Jr. Miss for her presentation on the art of storytelling through storyboards and Marissa for Miss Florida Seminole. Cheyenne and Brianna won the essay contests for Jr. Miss and Miss, respectively, while Patsy was voted Miss Congeniality by her fellow contestants.

The pageant was dedicated to the memory of the late Priscilla Doctor Sayen, Miss Florida Seminole 1964 and member of the Princess Committee, who served the Tribe for 35 years as Secretary-Treasurer and Secretary.

The newly crowned princesses must juggle school with their royal responsibilities but both look forward to learning about other cultures, attending pow-wows and traveling together.

Brianna, who will attend Tallahassee Community College in the fall, is proud of her Tribe’s accomplishments and wants to educate people about their success during her reign. She also encourages girls to consider running for princess.

“Try it to see if you like it,” she said. “Whether you win or lose, you will always learn something from it.”

Cheyenne, who has started her junior year at Okeechobee High School, hopes to inspire members of her Tribe.

“I want to be a role model to younger girls and be their inspiration,” Cheyenne said. “I want them to know they have a choice in life. I would like to make a difference in someone’s life. If I do, I would be so honored. There is no better feeling than that.”