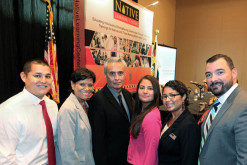 “Trying to figure out the best ways to accomplish housing and everything that goes with it is not easy,” said Patti Kramer, of the Kaw Nation in Oklahoma. “This is the best conference so far – all of us got so much out of it.”

Hosted by the Seminole Tribe of Florida’s Native Learning Center (NLC), the Aug. 19-21 event at Hard Rock Hotel & Casino Tulsa featured 25 workshops and a panel discussion led by Rodger Boyd, of the Navajo Nation and deputy assistant secretary of the Office of Native American Programs (ONAP) at the Department of Housing and Urban Development (HUD).

“For an Indian housing conference, you can’t get any higher than Rodger Boyd. It’s really a huge honor to have him,” said NLC executive director Georgette Palmer Smith, a Chotaw and Kiowa.

Many workshops began with historical references to ancestral Native housing such as the tipi of the Great Plains, the longhouse of the Pacific Northwest and the hogan of the Southwest.

“Shelter was culturally driven. When you live this close to the earth, you look to the earth to sustain you,” Boyd said. “Indian housing today is about looking back and reinventing, rebuilding and redesigning using our own cultural ideas and materials.”

Following forced removal from homelands and displacement to unfamiliar regions in the mid-1800s, ancestors fended for themselves. Homes were ramshackle at best, built with whatever materials were available, said Vince Franco, NLC compliance and resource development director.

The Indian Housing Program, part of the United States Housing Act of 1937, introduced rows of nearly identical three bedroom and one bathroom tract HUD homes that were built cheaply and fast throughout Indian Country regardless of location or Tribal culture.

HUD controlled all aspects from spending to building.

The Native American Housing Assistance Self Determination Act of 1996 changed everything, Glenn said, by putting control of HUD grants into Tribal hands. With that, came opportunity for Tribes to return to ancestral roots that included building self-sustaining communities centered around culture and family.

“More than walls and a roof, our homes are about values and identity. It is inherent to who we are to be sustainable to ourselves,” said architect Scott Moore y Medina, of the Native-owned Blue Star Studio.

Boyd also demonstrated how Tribes can grow plans for development by taking a conservative HUD-awarded Indian Housing Block Grants (IHBG) and leveraging the amount into millions.

For example, the Cook Inlet’s Mountain View revitalization housing project in Anchorage, Alaska started with a $433,588 IHBG grant that blossomed through three steps to a whopping $7.1 million.

For 2015, HUD has requested approximately $648 million to be distributed in IHBG funds to 369 Native interests in 34 states. About $416 million has so far been allocated this year.

HUD program specialist Michelle Tinnin said the agency provides assistance to Tribes “from when they start dreaming of the project or all the way through.” But, she said the NLC housing conference’s inter-Tribal trainers, industry professionals and agency officials were the first of its kind to provide invaluable information from inside Tribal resources.

“They work in a unique way because they are able to facilitate nationally. They are a huge catalyst. When you talk about utilizing partnerships, looking at issues holistically and affecting an entire community, the Native Learning Center has it done,” Tinnin said.

“We hold ourselves to higher standards,” Doney said. “We’re not just representative of the Seminole Tribe; we try to reach as many Tribes as possible because we are all the people of Indian County.”