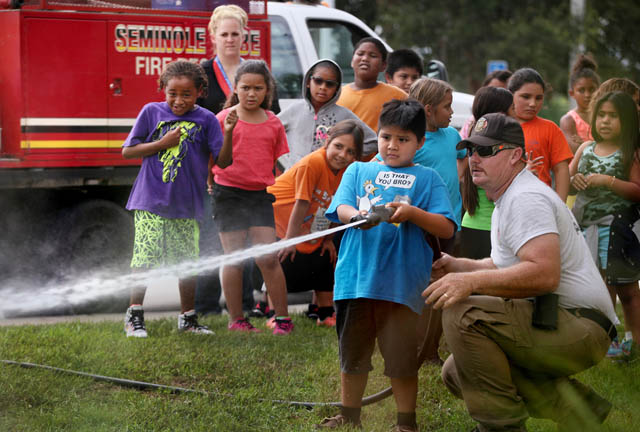 No one can doubt the fun that comes when firefighters let kids aim real fire hoses at orange hazard cones with powerful jet streams of water.

For Seminole Tribe Fire Rescue crews, it happened in the line of duty during National Fire Prevention Month educational activities for scores of children at six Seminole reservations.

“Our job today is fire safety and injury prevention education. Everything we’re doing is for the kids,” said Deputy Fire Marshal Bruce Britton wrapping up a presentation at Pemayetv Emahakv Charter School in Brighton.

From Naples to Hollywood to Fort Pierce, hundreds of Tribal youth were treated to hours of serious education cloaked in exciting activities that represented the national theme, “Working Smoke Alarms Save Lives: Test Yours Every Month.”

Children played while learning at a felt, wall-size house diagram where they posted Velcro smoke alarms in strategic locations: on ceilings or high on walls at least 4 inches from corners; outside every sleeping room; on every level of the home; and inside every bedroom.

At a fire ladder truck, kids were fascinated by an array of rescue tools that included super sharp axes to break through wood, heavy-duty metal cutters and spreaders for extricating people from cars, and yards of yellow hoses that carry gallons of water to snuff out fire.

Firefighter Brian Lenhart said the truck demonstrations gave children a chance to become familiar with firefighters and the tools they use. Firefighter Keith Rohan agreed.

“It gives the kids some experience with us so that if we have to be called out to help them in an emergency they will be more comforted and less afraid,” Rohan said. “They will know what’s inside the truck and how we use it.”

Wildland firefighters Keith Yeates and Chris Kemp had a blast letting kids blow off fears of the fire hose by shooting off streams of water at cones. But Yeates said it also gave the crew a chance to teach that wildfire prevention is as important as home fire prevention.

On some reservations, wildland is also home to endangered plants and creatures, Tribal ceremonial grounds and significant markers in Seminole history.

Wearing a red, plastic fire helmet, first-grader Choviahoya Weimann raised his hand high when Lenhart asked if the children had any questions. The former Little Mr. Seminole, who wants to be a firefighter when he grows up, said he already knows a few things about escaping fire.

“You touch the door and if it’s hot, there is fire on the other side. If it’s cold, then you can open it. If there is smoke, you get as low to the floor as you can and crawl out,” Choviahoya said.

Parents may have learned a few things, too, said Reagan Bauman, the department’s public educator.

“We hope kids will talk with their parents about what they learned and parents will read the literature,” Bauman said.