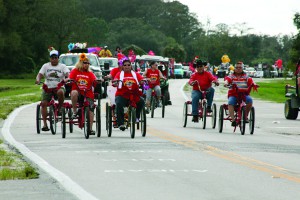 BIG CYPRESS — The Big Cypress Red Ribbon Field and Fun Day on Oct. 16 lived up to its name, but fun and games took a back seat to the reason for the event: encouraging everyone to live a drug-free lifestyle.

“As a prevention program, we want the kids to be outside and physical so they see they can have fun and get a high from doing things with friends and family,” said Thommy Doud, Big Cypress Boys & Girls Club manager. “Mission accomplished.”

About 65 kids, ages 4-14, participated in a number of field games, including an obstacle course, sack races, basketball free-throw contests and tug of war. Between contests, each child took the Drug-Free World Pledge administered by Fred Mullins, Family Services counselor, and witnessed by members of the Seminole Police Department.

“It is a good pledge,” said Edie Robbins, 9, after taking it. “I will help my family, friends and community.”

The pledge, created by the nonprofit Foundation for a Drug-Free World, is signed by youth around the world.

“I will tell everyone how much drugs harm people,” Ricky Garza, 10, said.

The annual Red Ribbon Day parade on Oct. 18 featured 18 floats decorated in distinct Seminole fashion with balloons, people in costumes and Tribal cultural references. The floats entertained the crowd while competing to be named best in parade by a panel of judges from the Seminole Police Department.The criteria for the competition included culture, creativity and the theme, The best me is drug free.

Ahfachkee’s float had a large floating globe surrounded by the milestones of life, including education, graduation, getting a driver’s license, registering to vote and military service.

“We are going for first place,” principal Lucy Dafoe said. “Last year, we got second place, and we want to win it this year.”

The school prevailed and won the best float in the parade.