BOCA RATON — The Ahfachkee School volleyball team improved each set before the Warriors ran out of time as their season ended Oct. 15 with a 3-0 loss to Glades Day School in a Class 2A-District 7A quarterfinal at Donna Klein Jewish Academy. Scores were 25-11, 25-15, 25-20.

Ahfachkee was seeded No. 5. Fourth-seeded Glades Day advanced to face No. 1 Donna Klein in the district semifinals.

Plenty of Ahfachkee supporters filled the stands. About 30 fans from the Big Cypress Reservation – including Councilman Mondo Tiger and Board Representative Joe Frank – made the trip to Boca

Raton to show their support for the team. A few times the fans belted out chants of “Let’s go Warriors” to pump up the players.

“The program is getting better and better. I’m just tickled that they got this far,” Councilman Tiger said.

“The coach [Miliani Quinsaat] has been working with them for the past couple years,” Rep. Frank said. “The girls are starting to get their skill sets in place. We’re fortunate there’s a lot of young girls coming in and getting the fundamentals down, so as they get into high school they’ll be playing a lot better. It’s a good foundation.”

“I’m so proud of them. One-hundred percent improvement, from the first game to where we are now,” added Principal Dorothy Cain.

Ahfachkee showed plenty of determination in each set against Glades Day, right up until the final point of the match. After the loss in the first set, the Warriors bounced back and seized momentum early in sets two and three. Two services points each from Alena Stockton and Janessa Jones, who also delivered an ace, staked Ahfachkee to a 5-1 lead in the second set. A kill from Mya Cypress and a point won at the net by Janessa Jones gave Ahfachkee another 5-1 lead in the third set. But throughout the match, Glades Day didn’t panic and had the answers in the form of powerful kills by Emilee Perkins and a strong presence at the net from Audrey Ascheman and others.

Late in the match, Ahfachkee clearly didn’t want its season to end. Trailing by eight points, the Warriors trimmed the deficit to four before Glades Day prevailed.

Ahfachkee will have big holes to fill next year. The loss to Glades Day marked the final match for three starting seniors – Jones, Cypress and Thomlynn Billie – along with substitute Crystal Garcia.

The seniors and their families were honored during a ceremony before the team’s final home game, a 3-0 win against Hollywood Christian. Cypress and Billie said they were glad they played volleyball in high school and enjoyed being part of a successful season as seniors.

“It was the best experience,” Cypress said.

“It’s been fun,” Billie said. “It’s a lot better players, not just in skill, but how everyone connects with each other. We work better together than last year. We’ve improved a lot this year.”

Next season’s core will likely be formed from a trio of returning starters from the class of 2020: Stockton, Leilani Gopher and Abby Tigertail.

Overall, coach Quinsaat was pleased with the season.

“They came a long way considering they started so late, not having a summer program, not having a tryout. I’m happy with them,” she said.

Quinsaat hopes to grow volleyball by creating development programs on the reservation at the younger age levels that would help feed the high school program. 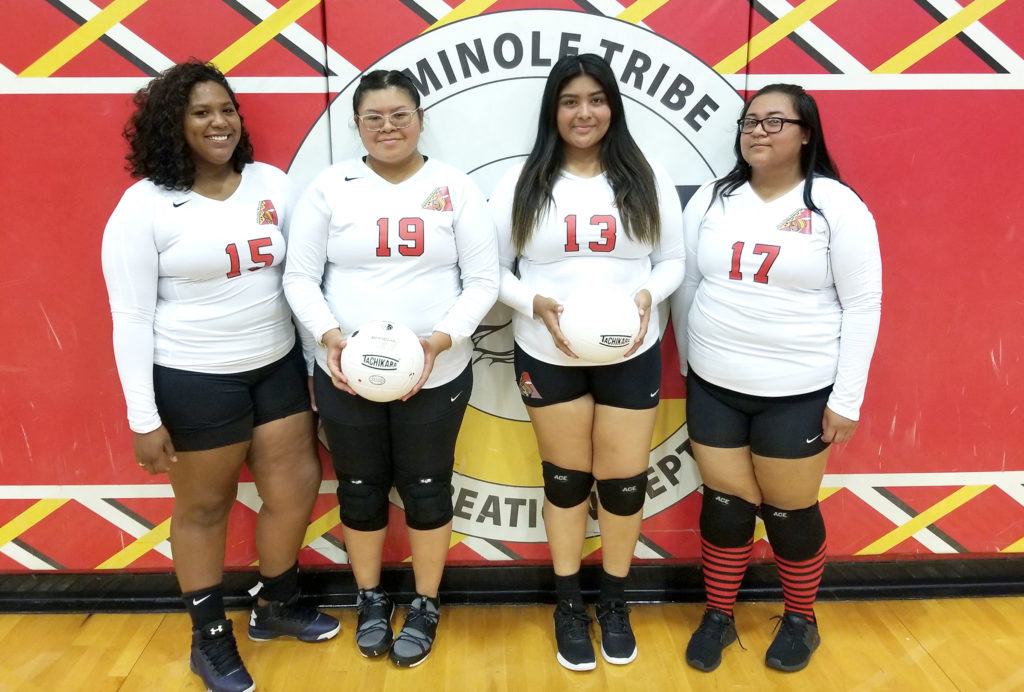