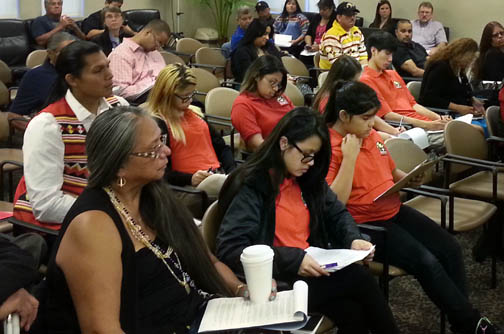 BIG CYPRESS — Members of Ahfachkee School Student Council got a leg up on leadership by paying close attention Oct. 10 during a Tribal Council meeting.

“It was a great experience,” said Jazmine Billie, eighth-grade representative.

“Watching the decisions be made was very exciting but a little embarrassing because sometimes the attention was on us,” Kaitlin said.

Still, Kaitlin and Jazmine said the students became more comfortable as the meeting took course and some envisioned themselves as being the leaders of the future.

That’s the point, Kaitlin said. They already meet high academic standards, outstanding attendance and excellent behavior expectations. And all have been elected to positions by their peers.

This year, the Student Council’s plan for community participation and fundraising for school events is still evolving, Kaitlin said, but some events have already happened.

The group took leading roles in the school’s Red Ribbon and Bullying Awareness campaigns and is starting to spread the word about a potential grades race that will cap the year with an expensive dinner at a fancy restaurant for the student who achieves the highest GPA. The dinner will likely be financed through candy gram sales.

And then there is prom. Kaitlin said the Student Council will soon put ideas together for the gala night’s theme.

“We’re really looking forward to this year,” said Kaitlin, who is among eight seniors in the class of 2015. At Ahfachkee, all high school students are invited to prom.

Jazmine is already hoping classmates will re-elect her next year.

“Being a leader makes me feel good. Yes, it can make a person nervous because of decisions to be made, but that’s why classmates voted for me,” Jazmine said.