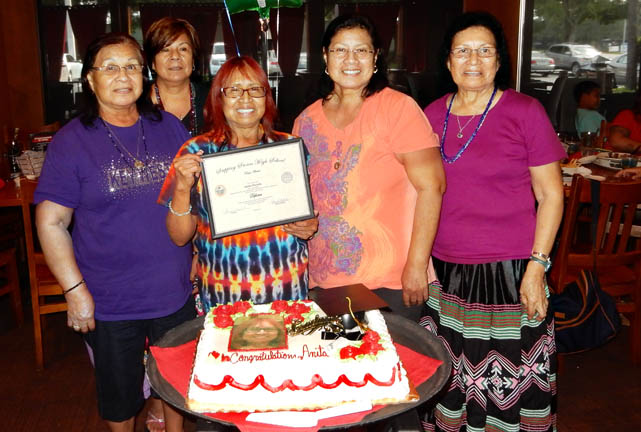 TAMPA — Anita Osceola admittedly spent too many of her 56 years living on the edge.

“I wanted to party and that’s what I did,” she said.

Fast forward to August 2014 when the Tampa resident received an envelope in the mail that held the long-awaited proof that the “party” was over but a richer, more celebratory life was surely in the works.

Anita Osceola, the devoted daughter of Jane Jim Osceola, mother of three adult children and grandmother of 11, finally and officially, held in her hands a very real and justifiably earned high school diploma.

Lola Juarez, Elder Services project coordinator in Tampa, said Osceola had prepared for several years to achieve a GED certificate, but after some stops and stalls, decided instead to earn an accredited diploma from the online Stepping Stones High School.

“Four years ago Anita began coming to senior programs as a chaperone for her mother. Then last year, when she became a senior herself, I saw she was more determined and wanted this and wanted that. Whatever we could do to help, we did,” Juarez said.

Juarez and Osceola sent requests and forms after forms to department heads in Recreation and Education that paved the road. She needed permission to work out in the gym – granted. Needed books for study – granted. Needed computer access and a tutor – granted.

Osceola studied with tutor Dee Anna Hanscom using a semiprivate computer cubicle at the Tampa Field Office. Hanscom described her student as persistent – but only after eliminating her basic fear of math.

“Each month passed with Anita practicing more and more, honing her educational skills, becoming more confident,” Hanscom wrote in a letter to Juarez. “Math finally needed to be conquered and slowly but surely Anita persevered through each topic. She used each building block to solidify her techniques solving multiple problems with no help from me.”

Osceola said she was driven from the inside out. In fact, the woman accustomed to calling a taxi for transport to the senior office, also studied for her driver’s license, passed the test and then bought a new car.

“I had to prove I could do this thing for me and for my dad,” she said.

Born in Miami at Jackson Memorial Hospital, Osceola grew up in the Everglades in a Seminole camp close to where her grandfather raised her mother. Osceola was sheltered though age 6 when she was forced by her parents to attend Flagami Elementary School. She never liked school, so as a senior at Coral Park High School she defied her mother and father, Albert Osceola Sr., and simply quit.

Without a diploma, Osceola worked for the Miccosukee Tribe nearly 20 years as a secretary but never earned more than $13 an hour.

In 1990, after her beloved father was tragically struck by a car and killed and then buried on her birthday, Osceola began drinking heavily in what she called “a very long pity party.”

She went into rehab to detox in 2010, but the stress to her body was too much and she landed in the hospital with a heart attack. Months later while staying in a halfway house, she caught an infection that sent her back to the hospital for three more months.

“After all those years when I thought I was too cool for school, I decided I had seen all the cool I was going to see,” she said.

Osceola took her life back by restoring her health first.

Sobriety, healthy diet and exercise led to a clear head for learning and a 20-pound weight loss. She thinks frequently about eventually taking an office job with the Tribe.

“My life is still about taking baby steps – one step at a time,” she said.

But Osceola has a vivid dream of how she will spend vacations for the rest of her life – in peace and at rest on a wide, sandy beach.

“I am in the Caribbean looking at the whitest sand and swimming in the clear, blue ocean,” Osceola said.