Skip to content
You are here
Home > Education > Ahfachkee digs into expansion, renovations

BIG CYPRESS — The Ahfachkee School in Big Cypress officially began construction on April 4 for its expansion and renovation.

The two-story, 30,000-square-foot expansion, which will include a new middle and high school building, will be completed in two phases. The first phase is construction of the new building and the second will revamp the existing buildings, including classrooms, the cafeteria and the culture room.

“This little school made it all the way to the top,” Murguido said. “That was an impressive honor and that’s what’s built into the school.” 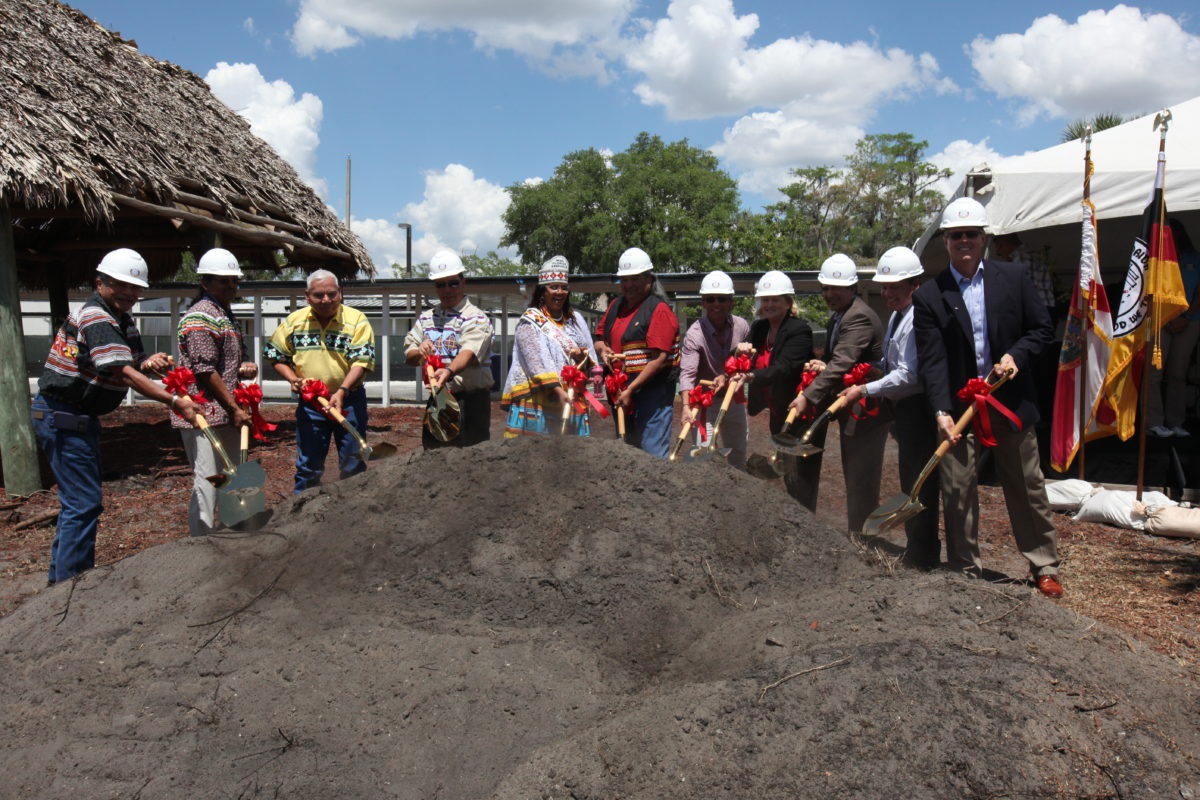 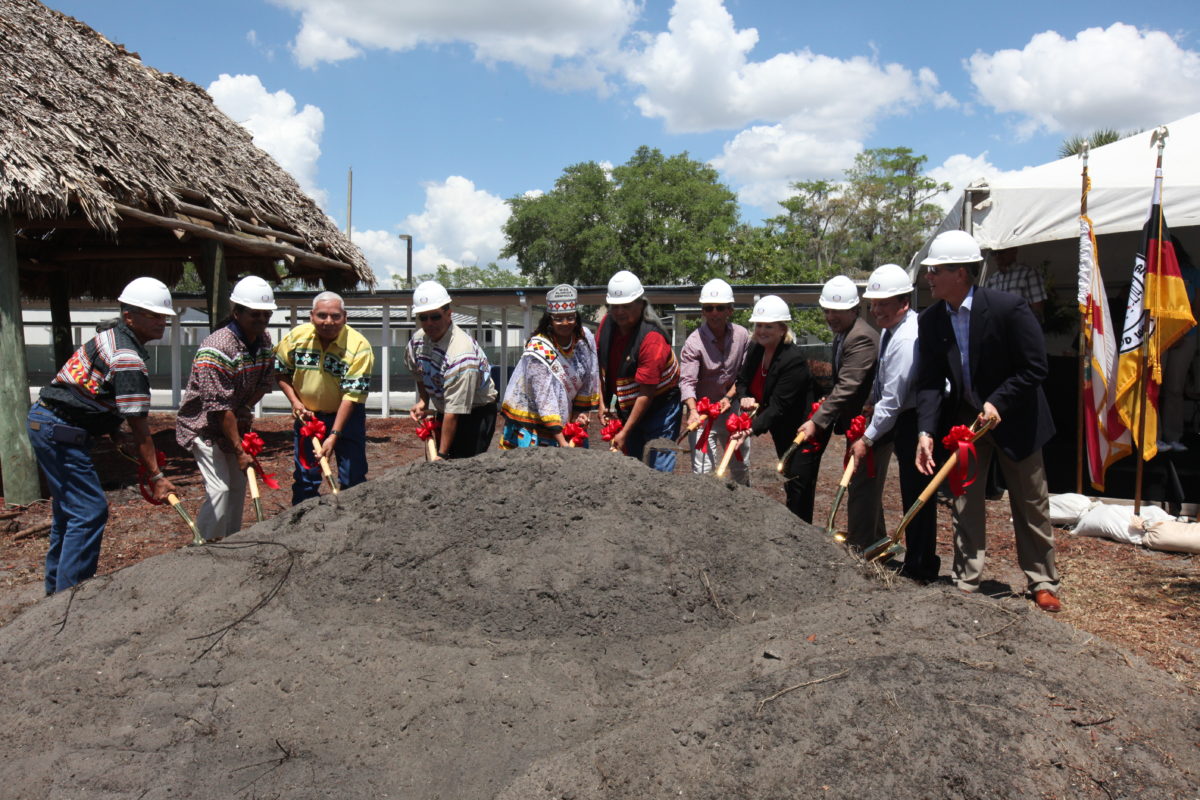 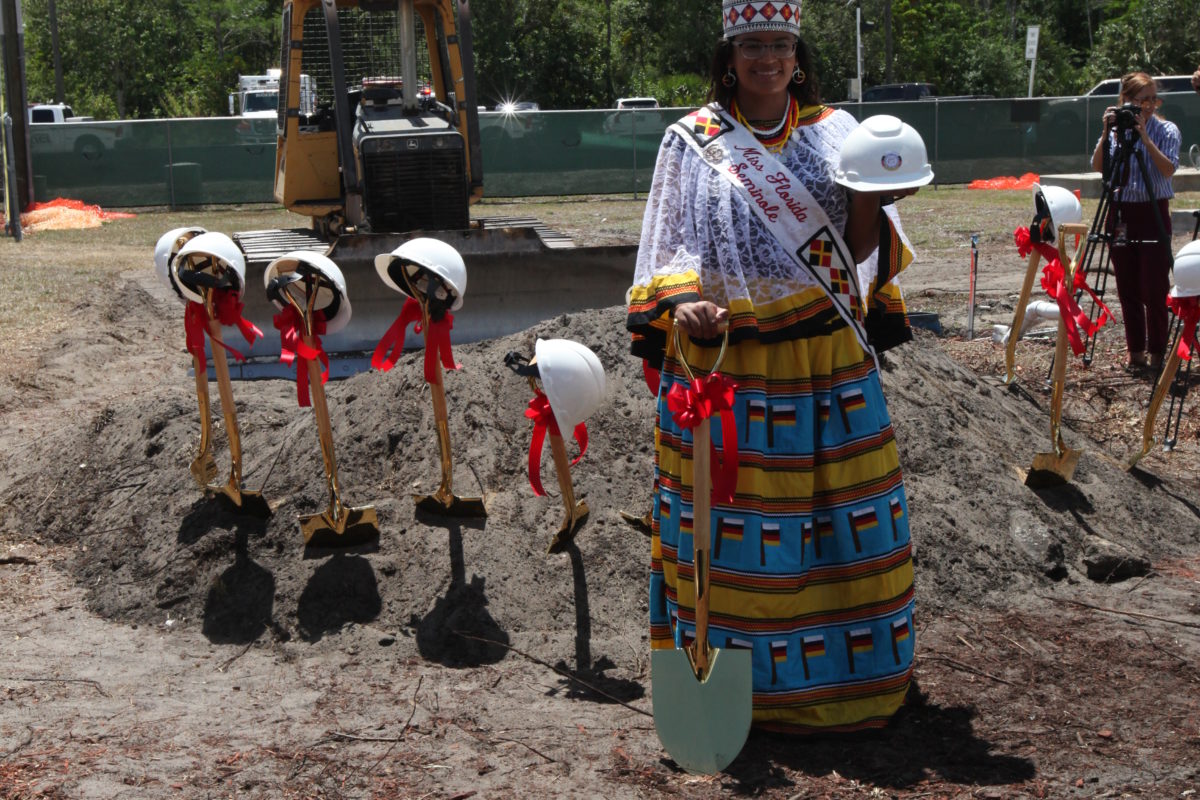 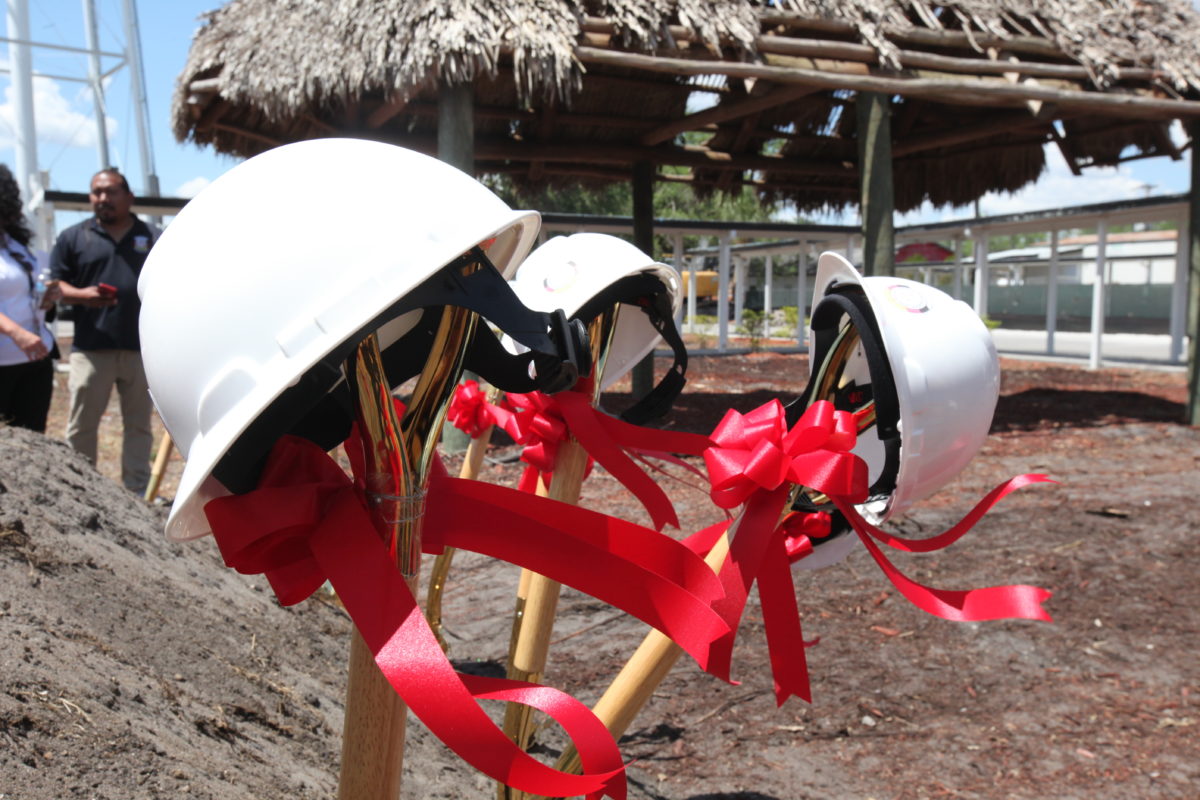 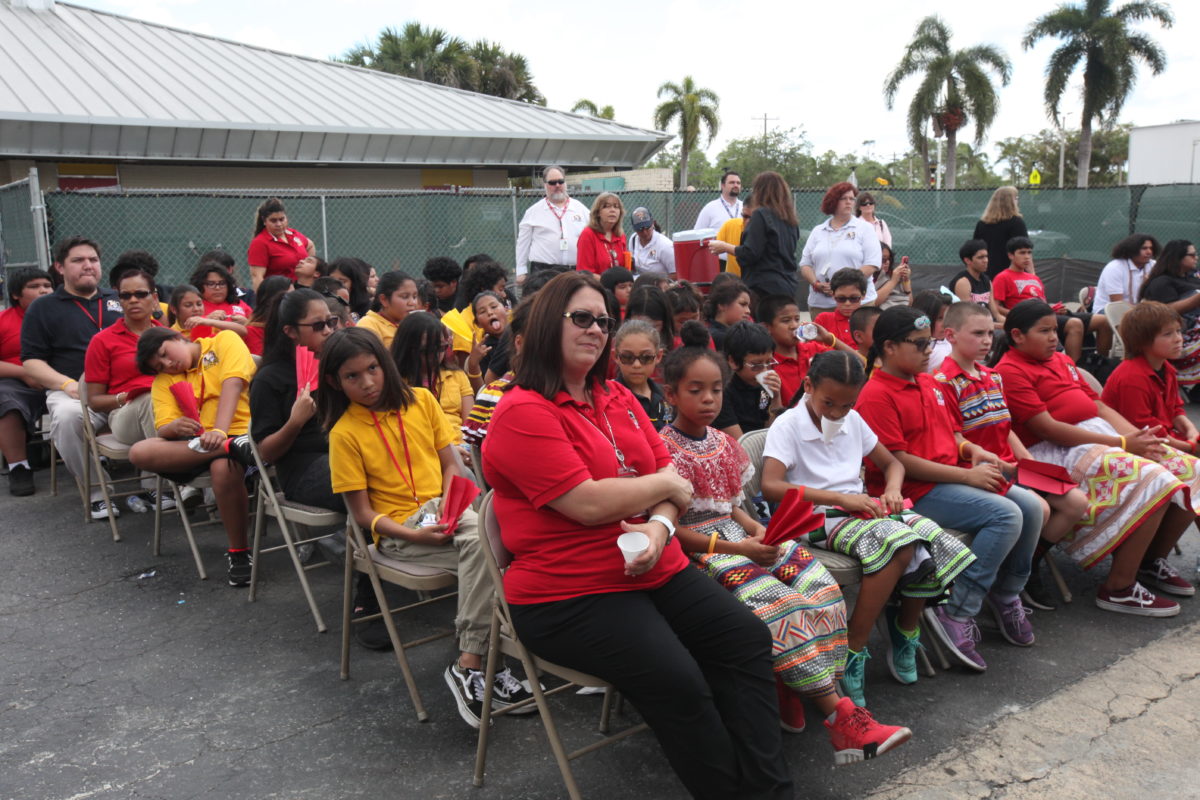 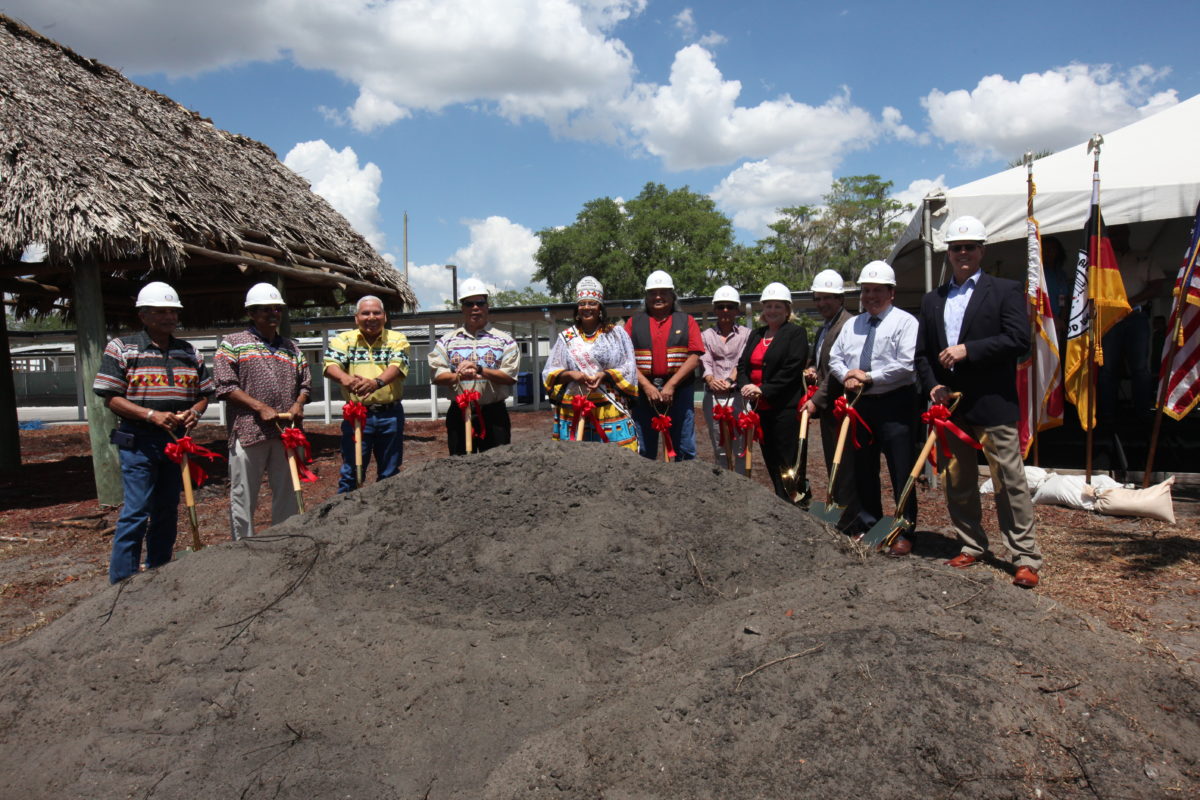 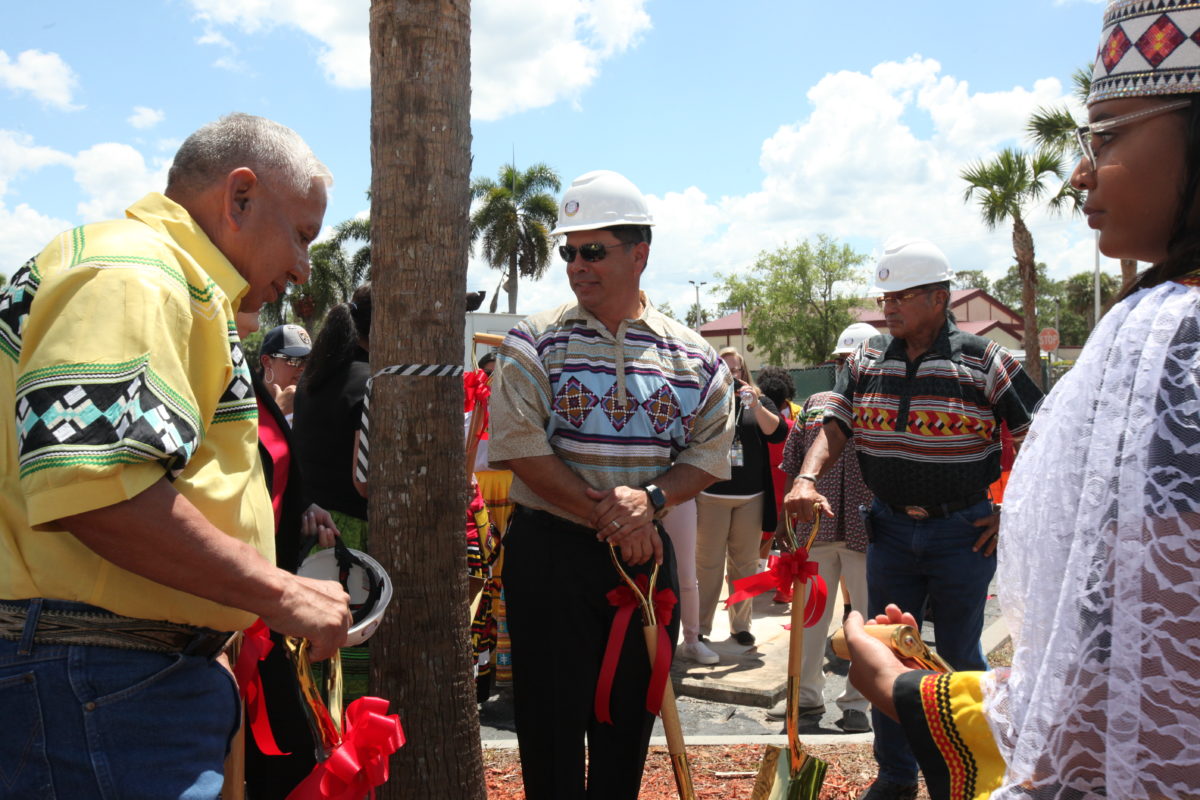 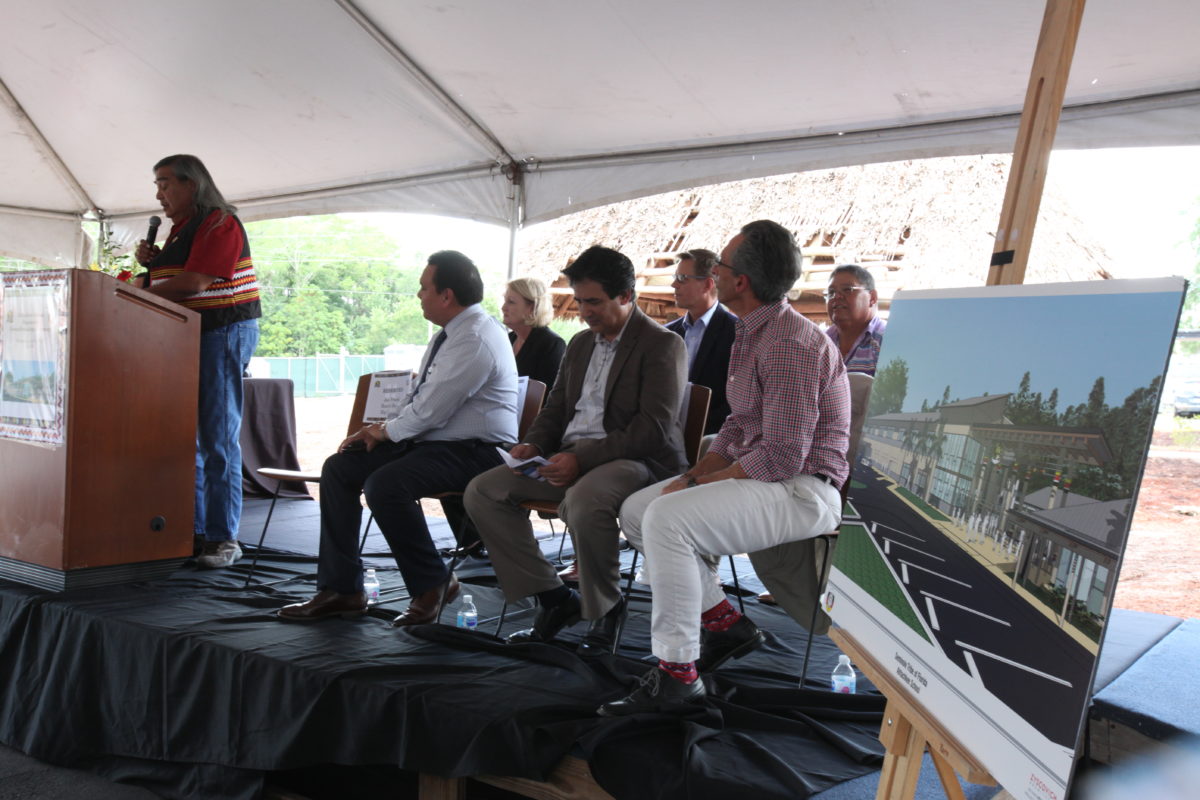 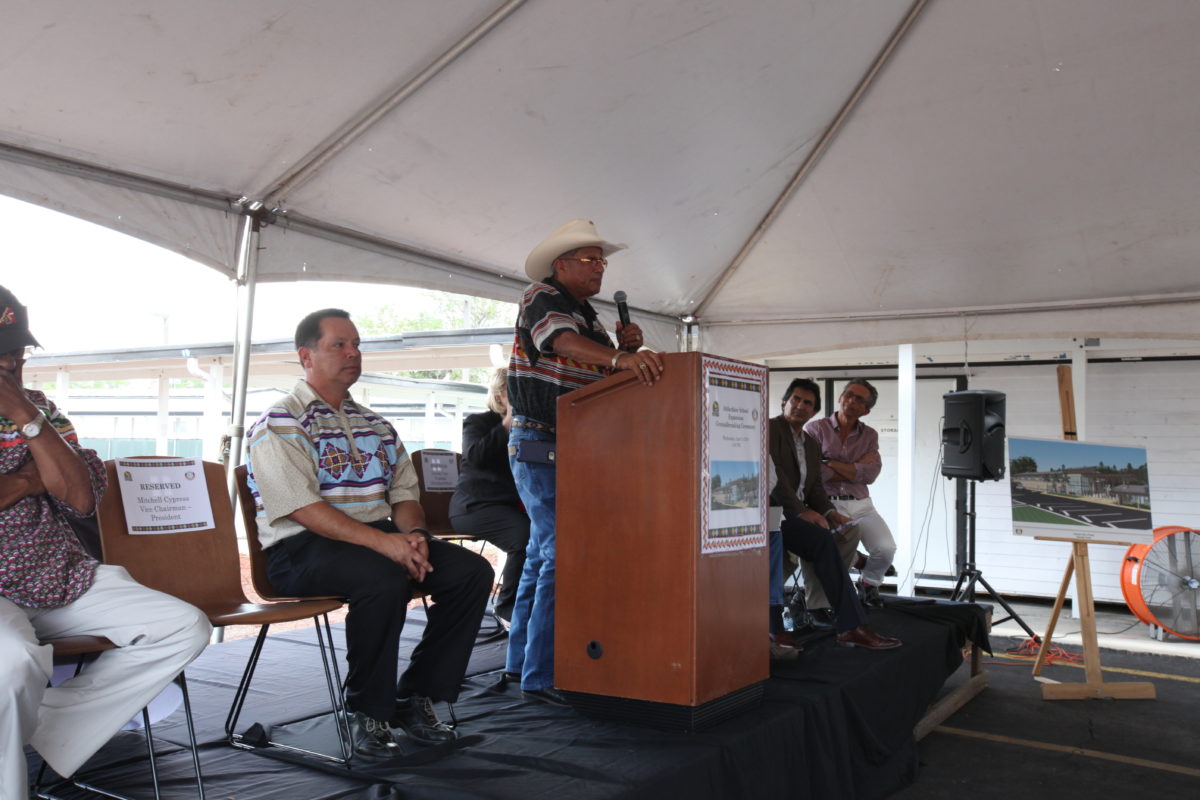 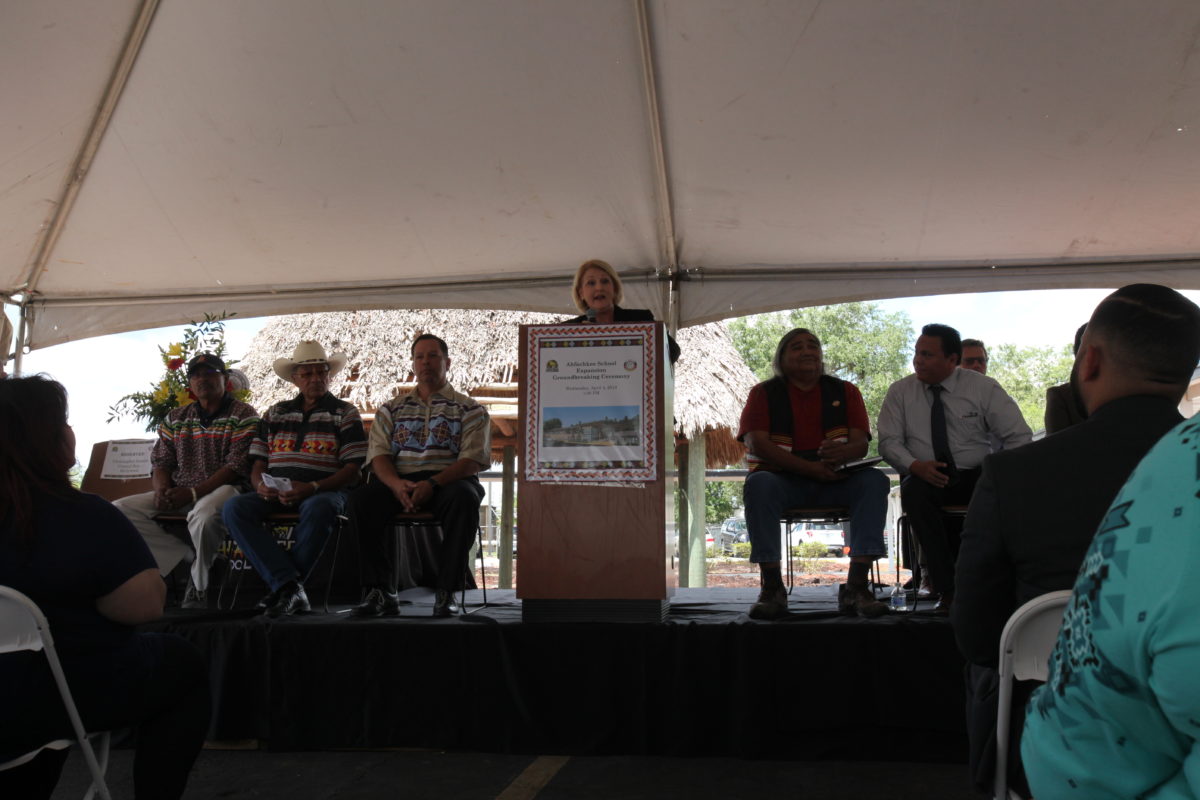 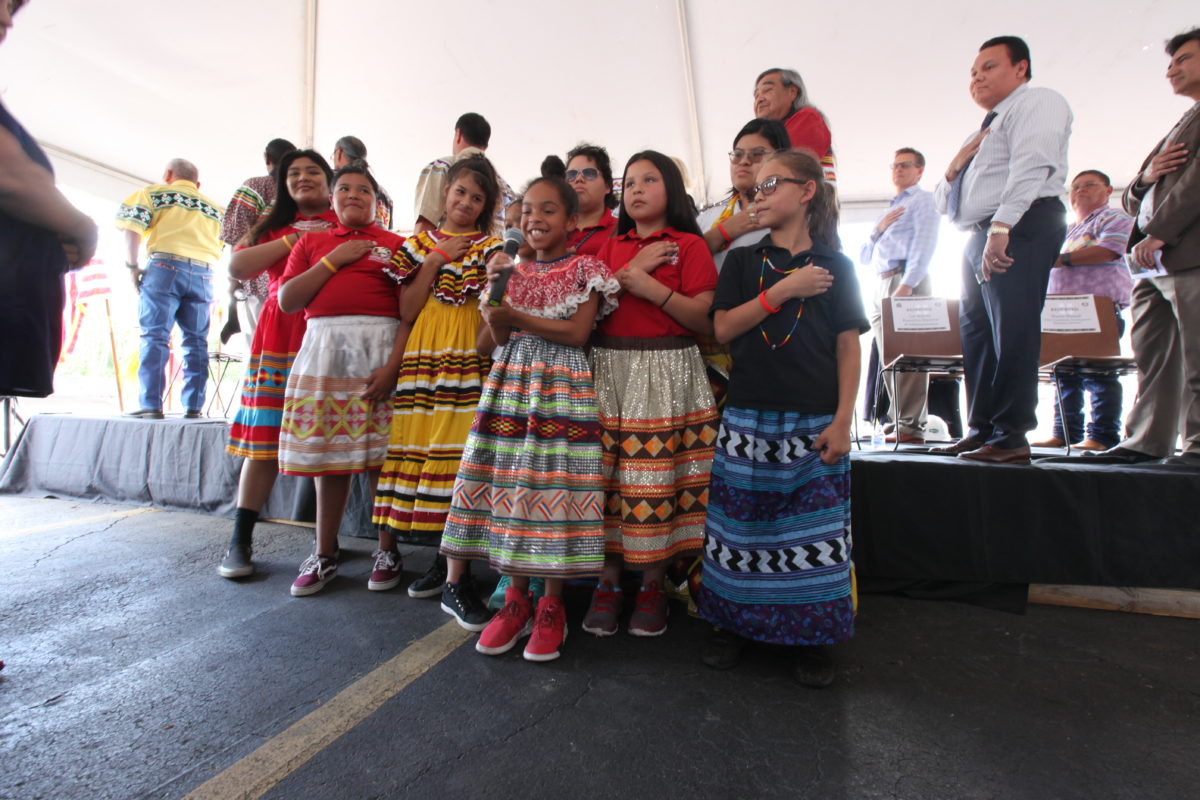 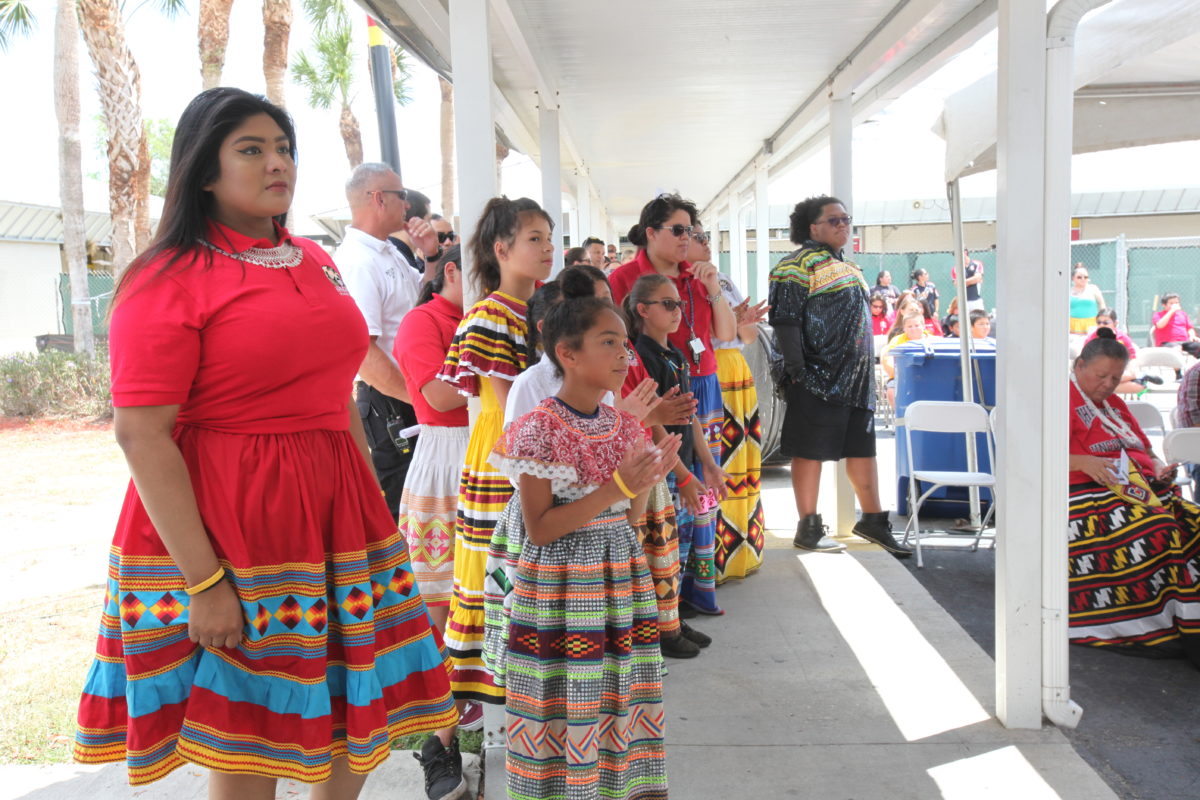 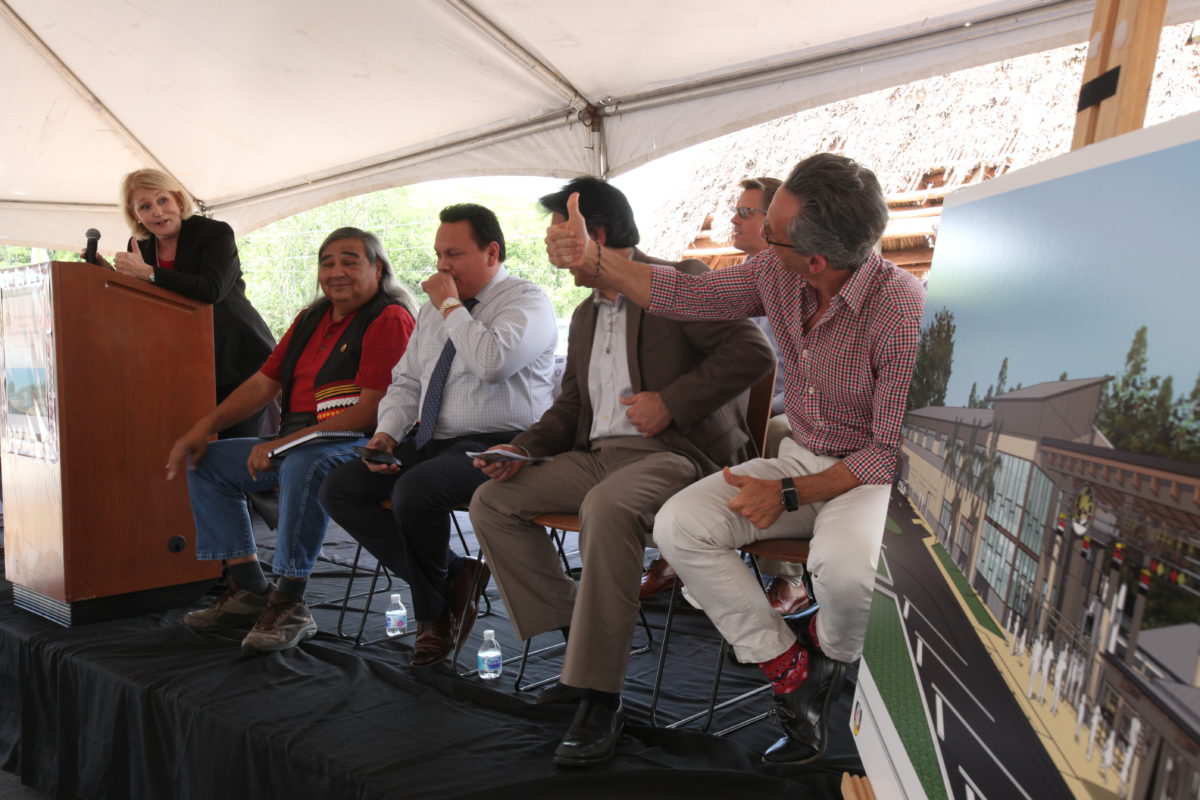 The new design includes a middle and high school wing, state of the art technology, labs for robotics, medical science and information science, a two-floor media center and learning communities for grade levels. While the existing buildings will maintain their structure, the inside will be completely redesigned.

“The existing school is getting a total face lift and when it’s all said and done it will look like one seamless, brand new facility,” Murguido said, adding that the best part about the design will be the center of the breezeway connecting the old and new buildings, which will contain revamped cultural art labs.

“Despite the preparation for the future, the great thing about the Tribe is it never forgets who they are, and that’s what the focus on the education is here. It’s all about the heritage and wonderful culture.”

Ahfachkee Principal Dorothy Cain expects that the revamped design will double the size of the student population before the new doors open to students in about two years. She explained that a lot of children who live on the Big Cypress reservation go to other schools in the area, but the expansion is going to draw them back to Ahfachkee.

“We have plenty of seats, but now we need the students to fill them. When there’s something brand new, that usually drives people to it,” Cain said, noting that as great as the school will look on the outside, it’s the internal renovations that will really attract the community. “We have a staff that’s very knowledgeable about STEM, about project-based learning, about being able to work in all different areas, including robotics and engineering. … Those are skills for our high schools students that are job-ready skills. If students decide not to go to a university, they’ll have skills to take with them.”

Ahfachkee plans on hiring three or four more teachers from Broward County public schools to help teach these skills, which Cain hopes will prepare students for the future.

“They have to go out in society and be accustomed to all these things that they’re going to be looking at and using,” she said. “We have to prepare them here for it.”

The expansion is a big change for many people in the community, including second-grade teacher Sue Tiger, who has taught at Ahfachkee since 1979.

“When I first started, we had 13 staff members and now we have about 70,” Tiger said. “Back then, we only had kindergarten to fifth grade, but now we have pre-k to 12th-grade.”

She said that although it’s going to be very different from what she and many others are used to, the renovations are going to be wonderful and motivate students.

“They’re going to want to come to school every day,” she said. “It’s going to give students more initiative. … We’ve been waiting on this for a long time.”

Before the groundbreaking, many people didn’t believe the expansion would really happen. Cain said that she told students the campus would look different when they returned from spring break, which was the week of March 22, but they kept telling her it wouldn’t happen.

“The kids have been hearing about this school for a long time, but nothing ever transpired for them. On Monday they all came back and the fence was up,” she said, adding that she made sure the construction workers put peep holes in the fence so students can see the transformation process.

Executive Direction or Administration Lee Zepeda is excited to see the school transform as well, as he was a teacher at Ahfachkee for five years before being principal of the school for an additional five years.

“Today’s a huge celebration,” he said. “We’re not just celebrating the groundbreaking of a brand new school, but I think we’re celebrating the future learning that’s going to take place here with all the generations that are going to come up through this school. … I worked here for 10 years at this school and it is truly special.”

The school is expected to open the expansion within 24 to 26 months.

Miss Florida Seminole Randee Osceola said she hopes she can complete a full circle with the school and stay a part of the future advancements.