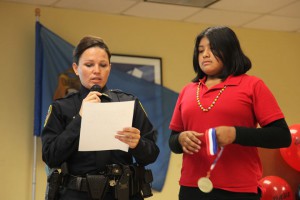 BIG CYPRESS — The last day of the 2011-2012 school year on May 31 marked two big celebrations at Ahfachkee School: the D.A.R.E. graduation and the Fourth Quarter Awards Ceremony.

The morning kicked off with students from kindergarten, third, fifth and sixth grades meeting in the cafeteria to receive their awards for the completion of D.A.R.E., a nationwide program that gives children the skills they need to avoid involvement in drugs, gangs and violence.

School Resource Officer Michele Short teaches the 10-week course at Ahfachkee once a week, tailoring the content to each grade level. Kindergarteners learn to avoid strangers and third-grade students learn about bullying, while the fifth- and sixth-grade students learn how to resist peer pressure and live drug- and violence-free lives.

Fifty-eight students graduated from the program.

“I challenge you to take on the mission of D.A.R.E.,” principal Lucy Dafoe said to the students. “I want you to remember exactly what your education taught you.”

During the graduation, fifth-grade student Mya Cypress and sixth-grade students Mazzy Robbins and Ethan Balentine also received special recognition for winning the essay contest Officer Short assigned the students. Each student wrote an essay explaining why they would stay drug-free.

“I think knowledge is power,” Officer Short said. “The joint effort of law enforcement, school and parents is essential [in keeping kids drug-free]. It’s important for students and schools to have a resource like this available to them.”

After the students received their D.A.R.E. certificates, they headed to the Herman L. Osceola Gymnasium for the Fourth Quarter Awards Ceremony. Principal Dafoe brought in hypnotist Glenn Miller to entertain the students.

Twenty-four students, teachers and parents volunteered to get hypnotized and lined up in seats inside the gym. Miller instructed them to sit with their feet flat on the floor and close their eyes, telling them to feel “loose, limp and lazy.”

At Miller’s instruction, hypnotized volunteers pretended to be super models, famous singers, including Michael Jackson and Britney Spears and even the Village People. Ahfachkee teacher Jonelle Pollard was made to believe a blow-up alien doll was the man of her dreams.

Once the entertainment concluded, students ate lunch and received recognition for their hard work during the fourth quarter in attendance, behavior, academics, citizenship, culture and GPA. Principal Dafoe congratulated the students and encouraged them to gear up for the upcoming school year.

“Be ready to commit to your next grade level,” she said.