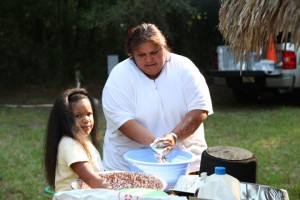 The result? A great, wet time was had by all.

“Little rain never hurt nobody,” smiled Victor Billie, one of several Seminole Tribal members who traveled to Stephen Foster Folk Culture Center State Park to participate in this year’s affair. “Stay under the chickee and you don’t get wet, and you wait till it’s over.”

Billie spent the weekend demonstrating his family tradition of woodcarving, using a pocketknife to carve tomahawks, sofkee spoons, small, toothy alligators and the like from hunks of soft, close-grained cypress wood. He sat at Ee-to-lit-kee, the Seminole Family Camp, beneath one of several chickees built 31 years ago by Chairman James E. Billie at the park’s extreme south end.

The Chairman himself spent a couple days there in a parked camper with his family, greeting a string of well-wishers and friends who know him more as a fellow musician and songwriter than as the Chairman of a Native American Tribe.

“I think we’re going to come back here in a few months and move this camp to another location,” said Chairman Billie, who accompanied Florida Park Service director Donald Forgione and State Park manager Ben Faure in choosing a new site.

In fact, Chairman Billie was born in a setting similar to Stephen Foster Park’s Seminole Family Camp. With Jenny Shore, Nancy Shore and Alice Smith sewing, making beadwork and dolls, and Lorene Gopher, Charlotte Burgess and Mollie Jolly making frybread and other traditional Seminole foods, the scene was reminiscent of Seminole village areas staged in most Florida tourist attractions in the 1940s and ‘50s. (Chairman Billie was born on the grounds of the Dania Chimp Farm, where his family was employed to “live” just as if they were out in the Everglades.)

Brighton’s Billie Bowlegs III participated in the Florida Folk Festival’s opening ceremonies for many years leading up to his death in 1965. Each year, from the very first Florida Folk Festival in 1953, a contingent of Seminoles would make the annual end-of-May trek to White Springs, a picturesque Southern grits of a town right on the Suwannee. They were greeted with open arms by State officials and were allowed to camp on the grounds.

Despite Tropical Storm Beryl – which came in through Jacksonville, did a U-turn right over White Springs and dumped as much as 12 inches of water in 12 hours across much of northern Florida before heading north into Georgia and back out to the Atlantic – the show went on. The popular Arlo Guthrie, son of famed American icon Woody Guthrie, played solo and combined storytelling and humor with a host of his familiar hit songs played on guitar, piano and harmonica. John Anderson, an Apopka native and a perennial crowd favorite, sang 90 minutes of hit songs, including his comeback hit Seminole Wind, written while he was on a sabbatical on the Big Cypress Seminole Reservation.