HOLLYWOOD —  The 13th annual Randall Huggins Memorial Big Ballers Tournament has been a popular destination for some of Indian Country’s top basketball players for more than a decade.

“This is one of my favorite tournaments,” said Sadie In The Woods. “I’ve been coming here for more than 10 years. It’s smooth. Everything is on time. Very gracious hosts.”

While In The Woods is a veteran of the tournament, former University of Louisville standout Jude Schimmel played in it for the first time Dec. 9-10 at the Howard Tiger Recreation Center in Hollywood.

“I’ve never been to this tournament before. I heard it was pretty big, so I wanted to check it out,” Schimmel said moments after she finished chatting in the stands with former Embry-Riddle star DeForest Carter, one of the top players in Seminole history who suited up for the Native Soldiers team on the men’s side.

Carter and Schimmel weren’t the only big names in the tournament. There were plenty of other Native stars, including sharp-shooting guard Jenna Plumley, who led the Lady Ballers to the women’s championship title. In the men’s division, Milton Garner scored 22 points to help rally Lords of the Plains (LOP) to yet another championship victory. While gathered with members of the Huggins family for a photo, LOP players held up three fingers for winning the tournament three years in a row.

“For us, it helps keep my son’s memory alive; that helps a lot,” said Norman Huggins.

For the players, the tournament serves as an opportunity to show support for the Huggins family.

“Thank you to the Huggins family for always having one of the best tourneys to hoop in,” Plumley wrote on Instragram. “They always take care of the players and fans with gear, serving lunch and dinner and just always providing an awesome atmosphere of hooping for everyone.

“We have respect for the family. It’s a special thing. We’re real close to that family,” said LOP forward Jay Liotta.

Teams featured rosters with players from all across Indian Country.

LOP’s level of play surged in the second half of the championship game. After trailing the Plainzmen 35-32 at halftime, LOP used 18 second-half points from Garner – the tournament MVP – to rally for a 72-64 win.

“We started off pretty slow,” Liotta said. “We put it in second gear about 10 minutes into the second half; that’s when we woke up. Milton stepped up.”

The champions also received 10 points from Ronnie Battle and nine points each from Kallan Glasgow and Alfonzo Hubbard.

The Plainzmen settled for runner-up honors. They reached the title game by edging Native Soldiers in a semifinal, 54-52. Native Soldiers featured some of the Seminole Tribe’s top players, including Carter, former Haskell star Duelle Gore (11 points) and Hunter Osceola (23 points).

Earlier in the tournament, Native Soldiers received a remarkable performance from Brady Fairbanks. The former Bemidji State guard couldn’t miss from 3-point range in a 98-38 win against West Indies. Fairbanks hit nine 3-pointers in the first half and finished with 11 tres and 35 points.

In a similar display of lighting up the scoreboard, Plumley, the women’s 3-point shooting star and tournament MVP, scored 32 points in the Lady Ballers’ 85-51 championship win against X-Factor. Plumley made seven 3-pointers in the second half and 10 overall.
The Lady Ballers were also propelled by WNBA player Angel Goodrich with 22 points and Ariah Osceola with 13 points.

Schimmel, 23, said she’s glad to be back playing with and against fellow Natives.

“Before I got into college or high school basketball, we always played in Native tournaments. It’s kind of going back to my roots, and it’s really fun,” she said. 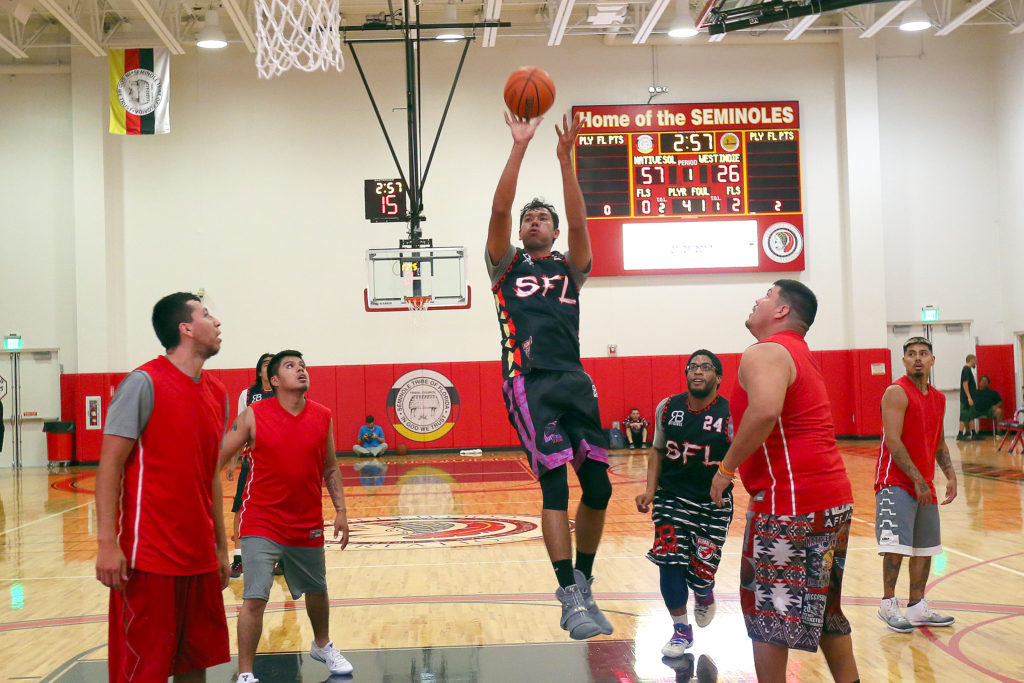 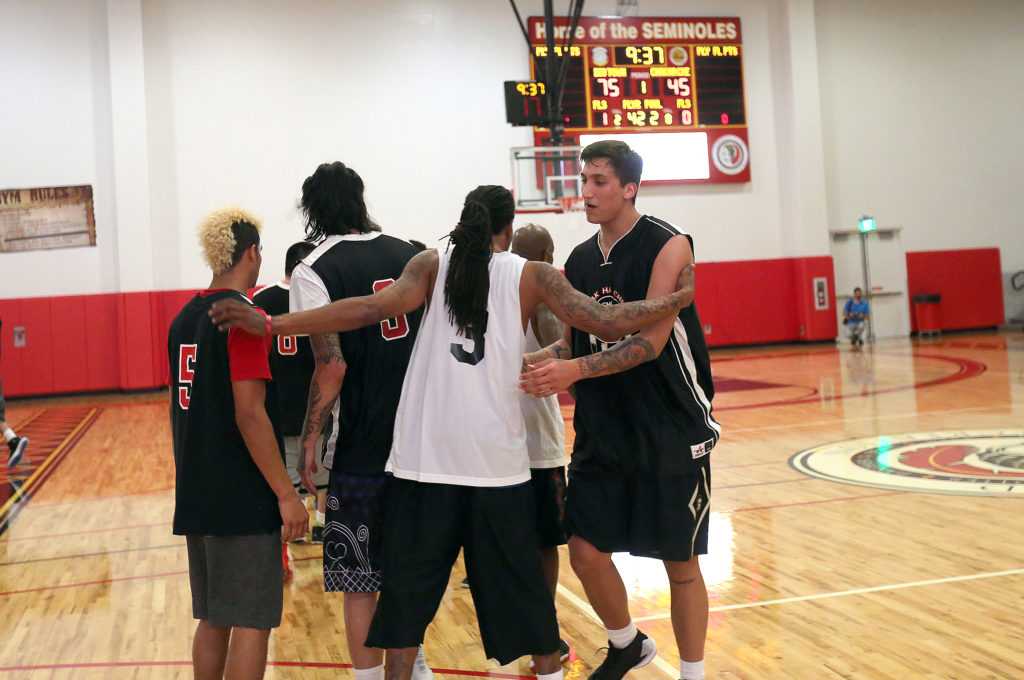 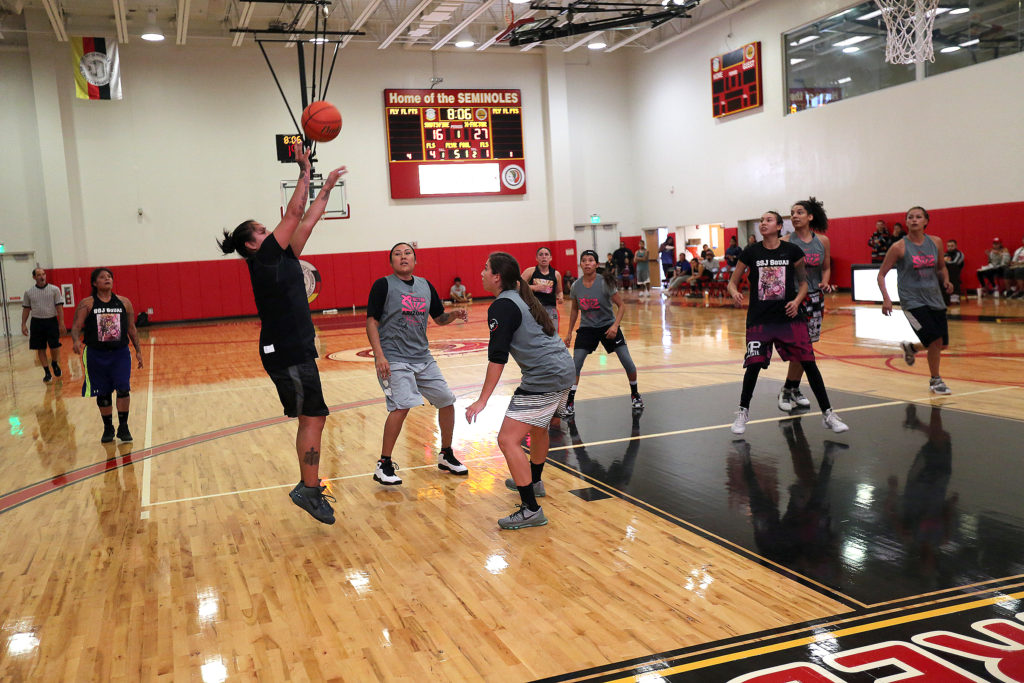