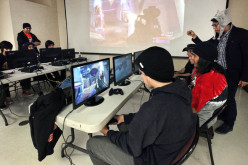 On Dec. 13, when 30 Miccosukee and Seminole youth pooled a sea of computer components for the second installment of BC Gaming Series: A Collaboration, all that mattered was what team would emerge winners of the Kings of the Swamp tournament.

“For gamers, there is no reason why we shouldn’t be able to organize together. What rez you live on and Tribe politics don’t matter. We’re still the same people,” said Miccosukee Tribe member Tommy Jesse Tiger, founder of the 2-year-old Trail Gaming League and the mastermind of the newest social and competitive outlet for Tribal teens and young adults.

Tiger, 21, a legal assistant and archivist for the Miccosukee Tribe, said he teamed with fellow Tribe member Darren Cypress to merge with Seminole gamers at the Big Cypress Boys & Girls Club. Darren, 16, lives in Immokalee and attends Ahfachkee School in Big Cypress.

Darren said the idea came at the perfect time.

The first inter-Tribal gaming event happened in September. At the time, Darren was new to Ahfachkee and spent most of his time outside school playing video games alone at home.

“I didn’t know anyone and it was weird. But being able to get the tournaments together and make friends has been great. Over the year, I’ve been able to develop friendships and hang out with more kids on a regular basis,” Darren said.

On the recent Saturday, the walls of the Boys & Girls Club were lined in computer stations where clusters of gamers parked their own computers for “freestyling” competitions. On the stage, eight monitors and eight Xbox systems were interfaced through a local area network (LAN) connection for rounds of Halo II.

Competitors pay a small participation fee, which goes into a pot to be divided among the winners. Winners also received an arcade fight stick.

Rows of chairs in front of the stage were filled with spectators cheering on the two teams of four. Food appeared pot luck style: the table was thick with Papa John’s, Chick-fil-A, soda, water and snack foods.

Spectators were welcome to pick up a microphone and play commentator. Darren and Tiger coached the players on both sides with game tips and jested with them to rile the competition. Trail won the tournament.

Elisah said organized video gaming days are a good addition to youth activities already available on the reservation, including basketball and skateboarding.

He said he plays a lot at home but had never before played in a competitive tourney.

“I definitely want to see it continue. Gaming is something all kids can relate to, even the ones who are not athletic,” Elisha said.

Tiger said gamers get a bad rap from people who see players as too lazy for sports, antisocial or addicted to games.

“There are people who are very successful in their jobs but just like to play. There are great students who also like to play. We strive to strike a balance for the homeostasis of gaming and school or gaming and work,” Tiger said.

“We’ll see what kind of gamers we breed. Hopefully we’ll have the first Native American gaming champ of the world,” Tiger said.

Tiger and Darren hope to host tournaments on Big Cypress every three months and launch a tournament series in Hollywood that will likely be titled Kings of the Swamp II. Darren said the events are open to everyone ages 12 to 22. But there are two rules: no alcohol or drugs, and everyone must have fun.

“Don’t be nervous about not knowing anyone; you will know everyone very soon. But don’t stay home by yourself – we do the events for you. You just have to show up,” Tiger said.

The next video gaming tournament will be held on the Miccosukee Reservation in March. More details will be announced. Call Tommy Jesse Tiger at 786-503-4222.