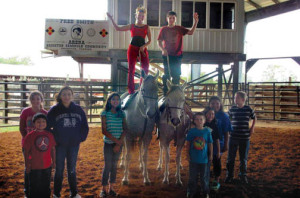 The one-hour presentation for the 11 members of the Boys & Girls Club, who are also 4-H’ers, featured a multitude of tricks, including Roman riding – standing with one foot on each horse while riding. In another trick, Cox hung on underneath a horse as it went through its paces in the arena. After the show, Cox discussed proper safety techniques around horses and answered questions.

Cox, of Ohio, was a 4-H’er as a child when a trick rider gave a demonstration. She knew immediately she wanted to pursue it. Cox became a professional while still attending Wilmington College in Ohio. She graduated in 2006.

“I’m somewhat of an adrenaline junkie,” she said. “I used to ride bulls; I’ve always pushed the envelope a bit.”

A former substitute teacher, Cox is comfortable in the classroom and has performed trick riding at schools nationwide.

She said she always encourages students to strive for good grades and follow their dreams.

“There are plenty of role models who aren’t necessarily child friendly,” she said. “If I’m going to be in the spotlight at all I feel obligated to be a good role model and convey good moral messages. I tell them to make good decisions and not settle for mediocrity.”

Cox, who also owns a boarding barn and training facility in Ohio, enjoys visiting Brighton and plans to stay until spring.

“This is one of my favorite places to come,” she said. “I was a total stranger two years ago and now they treat me like family.”