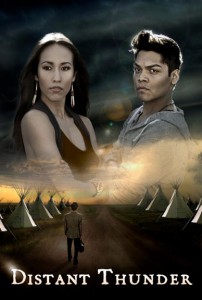 NEW YORK — Seminole Tribal member Spencer Battiest made his mark, singing and acting at the famed Off Broadway Players Theatre, earlier this month as a cast member of the first Native American musical play “Distant Thunder.”

“Amazing,” Battiest said when he returned home to the Hollywood Reservation. “Just amazing. So many people came up to me who recognized me from “The Storm” music video. I had a great time. I learned a lot about this business. It’s been fun and educational to be in on this project from almost the very beginning.”

Battiest and brother Doc became nationally known in Indian Country as writers and performers in “The Storm,” which recently won the Native American Music Award as Best Music Video. A few months ago in Los Angeles, he participated in a reading of “Distant Thunder,” a play written by Shaun Taylor-Corbett, of the Blackfoot Nation.

During semiformal presentations, called staged readings (without real production, sets or costumes) actors read the dialogue. Much is left to the audience’s imagination. This allows continued development of the script and is also a way for producers to see, hear and potentially finance it.

“Distant Thunder” takes the theater-goer on a journey with attorney Darrell Waters, a young half-Native, half-white outsider raised in Chicago who returns to his Blackfoot Tribe seeking reconciliation with his estranged father.

According to the event playbill: “There he finds himself in the middle of a Tribal crisis and unwittingly ignites a burning desire in his people to answer a dormant question: ‘How can the Blackfeet claim their empowerment in an ever-changing America without sacrificing their past?’ There is a need in all of us to return ‘home,’ whether it is a physical place or a cultural identity.”

The play is unique in its effort to present an entire Native cast.

“Hollywood has been lax in casing Native Americans, even in roles that call for Natives,” said Battiest, who has worked in seven stage productions since last July.

“What I’ve learned is no mater how talented you are, there is always politics,” he said. “Hollywood plays games. And I am learning to play those games, making sure I have everything together, show up on time, learn my parts, don’t give anyone any excuse to kick you out.”

Born into a musical family, Battiest said he is learning to read music, “because everyone up here reads. It’s a necessary step along my career path.”

Battiest was signed on for the first “Distant Thunder” reading by casting director Rene Haynes, who specializes in Native American castings.

“We did pretty well. There were only five songs in the performance we put on, but that increased to 16 by the time it was taken to New York City,” said Battiest, who portrayed Tonto. “I was truly honored to be given this chance by Rene.”

In New York, a flier for the play was created using Battiest and Marisa Quinn, a Lipan Apache, best known for her role as Huilen in The Twilight Saga: Breaking Dawn Part 2. Another well-known native personality, Joseph Firecrow, a Northern Cheyenne Grammy-nominated flute player and consistent winner of Native American Music Awards, also has a part in the play.

The troupe performed “Distant Thunder” three times that weekend, once for critics and investors.

“I have to admit I was a little nervous for that one, especially since my parts were toward the beginning,” said Battiest, who welcomed his mother, June, brother and several friends who live in New York City.

“I haven’t heard a word about what the critics thought or if they have found any investors,” Battiest continued. “They keep all that real quiet, I am told. What I have heard, from the writers and the director, is we are going to the next step of development. I also met the guy who wrote some of the songs I sang, a guy who works in Broadway…He told me I brought his songs to life.”

Despite his sojourns across the country following acting pursuits, Battiest said he has not abandoned his musical career with brother Doc.

“Doc calls me every day and we talk about our ideas, and work on our projects…We keep trying and trying, over and over again until we get it right. We keep working, building up our Rolodex and, don’t worry, people will hear from us. And when they do, it will be perfect. I’ll forever work with Doc. There’s no other way,” he said.

His Seminole Tribe family means the world to the budding actor.

“I made sure I told (Chairman James E. Billie) and the Tribal reps what I was doing and what I am planning to do,” he said. “They were great. Very supportive. They gave me good feedback and told me to just keep being who I am.”