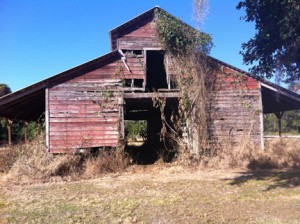 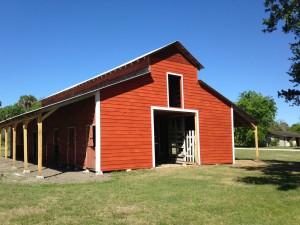 BRIGHTON — The Red Barn has a new – well, actually it is old – look.

Armstrong Contractors Inc. worked diligently over the past few months to stabilize the historic structure on the Brighton Reservation. At first glance it’s easy to see the new boards that cover the east and west facades, but Armstrong also conducted a great deal of work “behind the scenes,” according to the plans of the structural engineer.

Armstrong replaced the decayed floorboards in the hay loft; installed new concrete footings and foundation as needed, plus added extra rebar for more stability; replaced the roof support posts to match the existing historic elements; and installed hurricane clips and straps throughout. The Red Barn, built in 1941 to serve the Tribe’s cattle business, now exceeds the Florida Building Code.

“Unlike any other building that we have worked on, this old Red Barn has stood the test of time and mother nature,” he said. “You can feel the history and life that it has held through the years. It was a privilege to be part of the renovation of something this special.”

All the work done at the site was supervised by the Community Planning Department and guided by the Architectural Historian of the Tribal Historic Preservation Office (THPO). Since this is a historic building listed in the National Register of Historic Places, special care was taken to keep as much of the original fabric as possible in order to preserve the integrity of the barn. The building is now structurally sound and ready for the next phase in the preservation process.

THPO is planning for Phase II: a full restoration of the barn back to the 1940s era.

Based upon an existing historical photograph and oral histories, the Red Barn needs the following changes to get it back to its original condition: covering the hayloft on east and west sides; adding entrance doors on the front and back; repairing or replacing all stall doors on the interior and exterior; installing a wooden shingle roof; and repainting the exterior surfaces and trim.

THPO will be working closely with a historic preservation architect to carry out the restoration. Once Phase II is complete, THPO would like to bring the Red Barn back to the focus of the community by creating a park at the site.

THPO is seeking input about what elements Tribal members would like to see included in the Red Barn Park. Some possibilities are: wooden fencing around the property, cow pens, chickees, exhibits, gardens, footpaths and an amphitheater. The park facility would also include parking and restrooms.

If you have ideas for what you would like to see at the Red Barn Park, contact Carrie Dilley at CarrieDilley@semtribe.com.