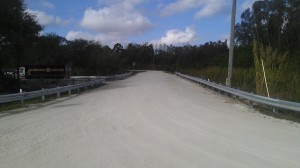 The result is a safer, more accessible road.

The Tribe contracted Weekley Asphalt Paving Inc. to extend the culvert and widen the road. Founded in 1947, the company specializes in asphalt production, as well as in the construction of highways, roads and bridges, according to its website, and has completed a bridge on Snake Road in the past.

Improvements to the Wind Clan and Farmer Roads intersection also included increased signage and the addition of a guardrail. Overhead power lines were also relocated.

“Big Cypress Councilman Manuel Tiger and Board Representative Joe Frank played a very important role in getting this project fast tracked,” Markwei said in an email. “A host of departments have also been part of the planning and design of this project including Planning, Housing, SPD, Public Works, ERMD, Infrastructure Services and Transportation. We appreciate their help and support.”

“Safety was our No. 1 issue with that section of the roadway,” Vallozzi said. “Now, it’s a lot safer. That was really the main idea.”

General improvements will also be made to Josie Billie Highway for safety and drainage concerns.

The Transportation Department welcomes the comments and suggestions of Tribal members on all Transportation projects. To comment, call 954-985-2300 ext. 10645.