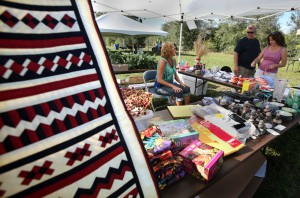 BIG CYPRESS — When Ted and Judy Beatty, of Ontario, get tired of Canadian cold, they pack their things into a compact house on wheels and drive thousands of miles to their home away from home – Big Cypress RV Resort.

“We’ve been coming here for nine years just to miss the snow,” Ted Beatty said. “First we came for a week but stayed for a month, then another month . . .”

Judy Beatty said the couple has returned to Big Cypress almost every February through April for nine years.

“It’s the most beautiful park we’ve ever driven into,” she said.

From Jan. 4-5, the Beattys and a handful of other long-time RV vacationers set up booths for the first Big Cypress RV Resort Camper’s Flea Market. There, under tents, six couples sold goods that ranged from battery chargers to barbecues to beautiful artwork.

The couple, who are self-described “all-the-time RVers” travel the East Coast. Some of their favorite camps are in North Carolina, Indiana and Ohio, but Big Cypress RV Resort has been their No. 1 place to be for the past three years.

“We feel like we’re with family here,” Sandy Klein said.

During the flea market, shoppers and sellers were treated to a wildlife show by Seminole Okalee Indian Village. Slithering venomous creatures and a massive alligator were stars of the show.

“We always love coming out and doing the shows,” Jennifer Osceola, general manager of Okalee Village, said. “We give a little history of the Tribe and village.”

Later, more than a dozen couples from the RV Resort attended the Cowboy Resolution Rodeo at the Junior Cypress Rodeo Arena.

On any given day, vacationers hike and bike through the reservation, but mostly, they enjoy activities at the camp site.

“The first time we were here I made six new Facebook friends,” said Sandra Mendez, of Illinois, who with her husband, Bob Mendez, is spending her second winter at Big Cypress.

Mendez said anyone who wants to relax, make new friends, and join in fun activities where the price is right and the weather is always nice should consider the Big Cypress RV Resort.

“Bill loves it because we have to drive 40 miles to the nearest Walmart; I can’t spend money,” Sandra Mendez said.

The Beattys credit Evelyn Mata, the resort’s supervisor, for the place’s cleanliness, tranquility and what the couple calls “peaceful perfection.”

“Everyone volunteers, everyone helps and Evelyn is simply the best,” Ted Beatty said.