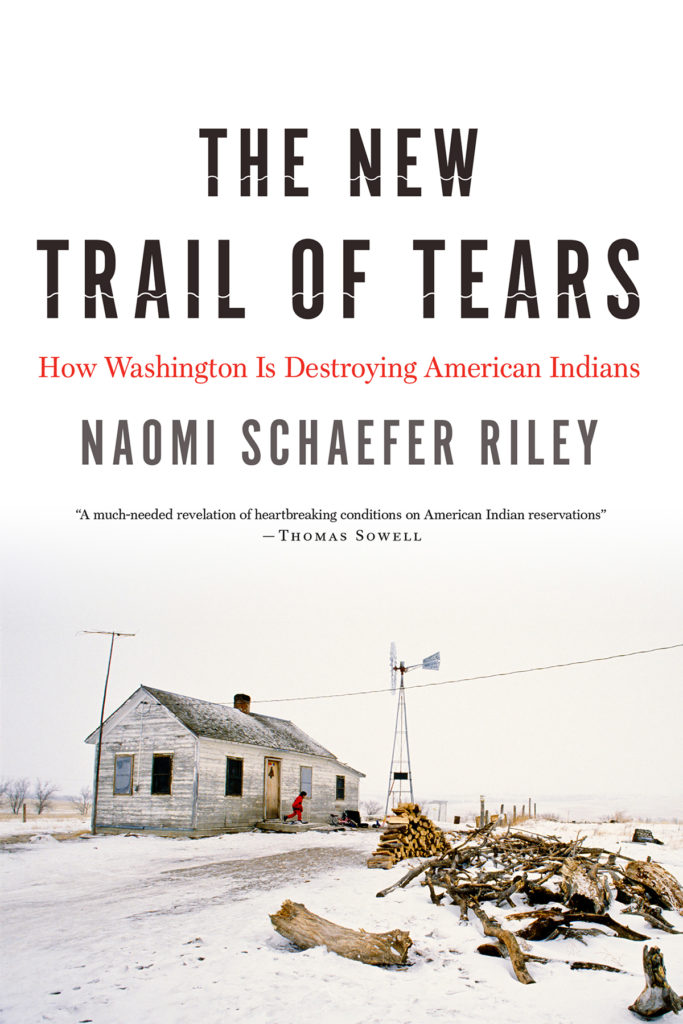 If you want to know why American Indians have the highest rates of poverty of any racial group, why suicide is the leading cause of death among Indian men, why native women are two and a half times more likely to be raped than the national average and why gang violence affects American Indian youth more than any other group, do not look to history.

There is no doubt that white settlers devastated Indian communities in the 19th, and early 20th centuries. But it is our policies today—denying Indians ownership of their land, refusing them access to the free market and failing to provide the police and legal protections due to them as American citizens—that have turned reservations into small third-world countries in the middle of the richest and freest nation on earth.

The tragedy of our Indian policies demands reexamination immediately—not only because they make the lives of millions of American citizens harder and more dangerous—but also because they represent a microcosm of everything that has gone wrong with modern liberalism. They are the result of decades of politicians and bureaucrats showering a victimized people with money and cultural sensitivity instead of what they truly need—the education, the legal protections, and the autonomy to improve their own situation.

If we are really ready to have a conversation about American Indians, it is time to stop bickering about the names of football teams and institute real reforms that will bring to an end this ongoing national shame.

*** An excerpt from The New Trail of Tears: How Washington Is Destroying American Indians***

You can drive for miles on the Pine Ridge reservation without seeing another human being. GPS doesn’t recognize many of the addresses here in rural South Dakota. Of course, it’s possible to drive long distances in the American West without coming upon a major town, but gas stations and convenience stores and fast-food restaurants usually pop up fairly often on the major roads. On Pine Ridge, though, if you don’t fill up your gas tank at the right time, you might find yourself out of luck.

To say that this area is rural doesn’t really begin to describe it. “Desolate” comes closer. On the first morning of my visit to Pine Ridge, I left my motel and drove toward a school I planned to visit. I traveled almost 40 miles before I saw a place to buy a cup of coffee. I’m told that there used to be a coffee stand at a shack in the motel parking lot, but the owners didn’t get enough customers. A couple of locals told me that they couldn’t get permission from the Bureau of Indian Affairs to put up a sign on the road.

About 3,000 people live in the Wounded Knee School District in Manderson, South Dakota. Manderson is in the middle of the Pine Ridge reservation, which makes up most of Oglala Lakota County (formerly Shannon County), the second poorest county in the United States. In 2013, the five police officers assigned to patrol the area received a staggering 16,500 calls for emergency assistance. Sitting at breakfast with me in Rapid City, 100 miles away, Stacy Phelps pauses to let me do the math. Phelps, CEO of the American Indian Institute for Innovation – which has been brought in to “turn around” the Wounded Knee school, among others – wants me to understand the statistics that he’s up against.

More than one of the men I interview ask me whether my husband wasn’t concerned about me traveling through the reservation alone, particularly at night. A sign in my motel room requests that I use the rag provided rather than bath towels to clean my gun. Statistics are hard to come by, but as of 2009, there were 39 gangs on the reservation, involving more than 5,000 young men. The average life expectancy for men on the reservation is 48, and for women it’s 52. Suicide and poor health are partly to blame for those numbers, but so is violence.

With unemployment at more than 80 percent and alcoholism rampant, Pine Ridge is a hard place to grow up. The schools’ first job, it has to be said, is to keep children safe. Since Phelps’s team took over two years ago, there’s general agreement that the school is a calmer place. When I walk through the halls of Wounded Knee – which goes from kindergarten through eighth grade – they’re quiet. Although the area outside of the school is run-down, with trailer homes falling apart and trash strewn about, the inside of the school is clean, freshly painted, and bright. It also seems fairly empty – the school operates at less than half of capacity.

Alice Phelps, the newly installed principal and Stacy’s sister-in-law, takes me to visit some of the classrooms, where teachers seem to be doing everything in their power to keep things under control. In a second-grade class, the teacher speaks to students in a soothing voice, telling them to “let go of the negative.” She asks them to “think about what we can do today to be successful – to make it into third grade.” Most of the dozen students seem to be listening while she offers instructions on how to write a friendly (as opposed to formal) letter. After going through the different choices for salutations, she tells them “We don’t write mean things in a friendly letter.”

While Phelps and I watch the youngest children play in a kindergarten classroom, we talk about their home life. “One weekend a month, we have lock-in,” she explains.

“Lock-in?” I ask, wondering what these innocent-looking kids have done to deserve this punishment.

Lock-in is not punishment, she assures me. It’s when children stay at school all weekend for safety. Although the weekend is billed as a cultural enrichment event for the children – they sing songs and play traditional games in the school’s gym – Phelps tells me that it’s timed to coincide with when government checks go out. These are the times when parents are most likely to drink and become abusive, she offers matter-of-factly. Indeed, Wounded Knee’s families have earned such a bad reputation that other schools are afraid to send their kids here for basketball games and other community events, Phelps says, because “our parents are so violent and our kids are so disrespectful.”

The rhythm of life at Wounded Knee is actually surprisingly dependent on the timing of government subsidies. In the days leading up to food stamp distributions, Phelps finds that kids are particularly hungry and distracted, because there’s not enough food at home. The school generally gives kids breakfast, lunch, and snacks, but when they come in on Mondays after a weekend at home, more than one teacher reports that the boys and girls are famished. Right after the food stamps come, many children are absent from school because they’re traveling with their families to the other side of the reservation to do grocery shopping.

There are occasional violent incidents at the school. But Wounded Knee has had to learn to deal with them independently. Phelps will occasionally call the police, but she explains that there’s usually something more urgent that the police officers have to attend to elsewhere. Nor does the school get much support from tribal child services. Children who are a danger to themselves or others might be removed briefly, but there aren’t many alternative places to keep them. And so the school has to create its own support system as much as possible.

Naomi Schaefer Riley, author of “The New Trail of Tears: How Washington Is Destroying American Indians [2016 Encounter Books], is a weekly columnist for the New York Post and a former Wall Street Journal editor and writer whose work focuses on higher education, religion, philanthropy, and culture. Riley’s writings have appeared in the Wall Street Journal, the New York Times, the Boston Globe, the Los Angeles Times, and the Washington Post, among other publications. She appears regularly on Fox News and Fox Business. She has also appeared on Q&A with Brian Lamb as well as the Today Show. She graduated magna cum laude from Harvard University in English and Government.