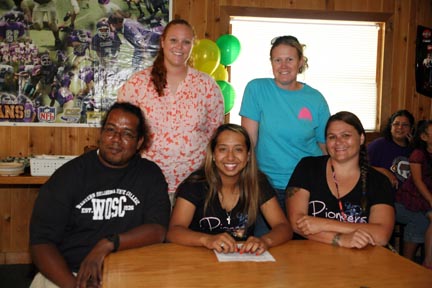 BRIGHTON — Family and friends joined Jaryaca Baker on June 19 to celebrate her acceptance of a scholarship letter of intent to be a student at and play softball for Western Oklahoma State College in Altus, Okla.  The signing was held at Beef O’ Brady’s in Okeechobee.

“It’s a great honor to be signed,” Baker said.  “I went and visited the school and I really liked it. I’m excited. I’m setting a goal for my brothers and sisters.”

Baker, a 2013 Okeechobee High School graduate, played softball for the Brahmans when the team won the district championship during her freshman and senior years.

She started playing softball at the early age of 5 with her father, participated in University of South Florida softball camps and later joined the Okeechobee Recreational Association. She also competed in numerous tournaments and played travel ball.  Making her mark at the age of 11, Baker hit her first home run playing for the Lady Seminoles in the Native American Youth Organization where the team took the championship.

Supported by her parents, Preston and Mona Baker, and her eight younger siblings, Baker polished her skills from field to field.

Present for the momentous celebration, Baker’s high school coaches Kim Hargraves and Heather Gillis confirmed that her support system and her determination led to her success.

“Jaryaca is a phenomenal athlete very good at just about anything she lays her hands on,” Hargraves said. “If she sets her mind to something, she is going to make it work.  She comes from a very supportive family.”

Baker dreams of playing catcher for Western Oklahoma State College for two years and then returning to Florida where she hopes to play for the University of South Florida softball team.

“It’s a passion and a dream,” Baker said. “If I could play the rest of my life I would.”