BRIGHTON — The Brighton Boys & Girls Club chickee wasn’t in terrible shape, but Brighton Community Culture was willing to replace the old thatch to use it as a teaching opportunity for youth. From July 5-8, nine students in the Summer Work Experience Program toiled in the heat and learned what it takes to keep a chickee in good repair.

“Chickees used to be our houses and people had a lot of respect for them,” said Johnny Jones, who led the project. “Now you see them with holes; we want to teach you how to do it. This is your time to help and learn something.”

On July 5, Jones, who works in the Culture Department, first showed the youth how to take down the thatch and then let them do it. He led them into the woods to find the proper size fans and explained how to cut them down. He taught them how close together the fans need to be tacked onto the frame.

The thatch roof of a chickee has a life span of about eight to 10 years, unless there is a strong wind, which can wreak havoc on the cabbage palm fans.

“If you don’t do it right, we’re going to take them down and do it again,” Jones said. “You will learn.”

The boys got inside and on top of the chickee to dislodge the old thatch. The girls picked up the fans and threw them into a waiting truck for disposal.

The Brighton SWEP students, who work in Culture, Recreation, IT, Seminole Police, and the library, chose the summer program to get work experience. The week in the Culture Department was a bonus.

“This means a lot to me. It’s taking us back to how they did things in the old days,” said Tyra Baker, 18, a SWEP participant in the Culture Department. “My grandparents grew up in chickees. Now

I understand and feel closer to them. I never got to know them, but think I’d make them proud.”

The Brighton Culture Department devotes a week each summer to SWEP participants so they can learn arts, crafts, beading, carving, traditional foods, and language. Throughout the summer, elders demonstrate skills and host workshops that are open to community members and for those who want to learn Creek and/or Mikasuki. Teachers are on hand to impart their knowledge.
After the thatch was cleared and the nails removed from the chickee, the group headed out to a wooded area of a Brighton pasture. The temperature reached 100 degrees with no breeze, but the youth were enthusiastic as they ventured into the woods with machetes in hand.

Trudging into the thickets of cabbage palms, Jones showed them how to choose the best undamaged fans. He demonstrated how to wield a machete and where to cut the stalk to leave enough room to tack it in place on the chickee.

“This gives us the meaning of our history and shows us how they lived,” said Layne Thomas, 16. “This would probably be light work for them.”

By the time all the fans were loaded onto the truck, the group was tired, thirsty, and hot. Once back at the Boys & Girls Club, they unloaded the haul and stacked the fans up neatly. In the days following, they tacked them onto the chickee.

“Back in the past, they just put us to work,” Jones said. “Now, if it wasn’t for the Culture Department, it would slowly go away. One day, these kids will be the oldest ones, and at least they can teach it.” 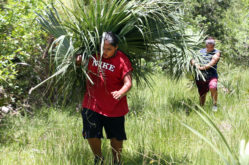 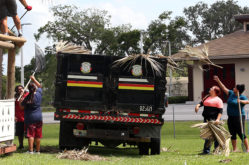 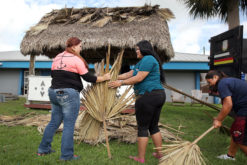 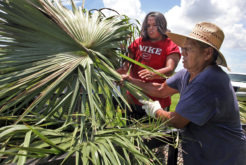 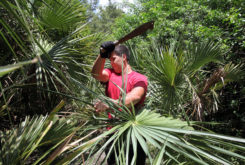