Skip to content
You are here
Home > Education > Student Council feeds the hungry, feeds the soul 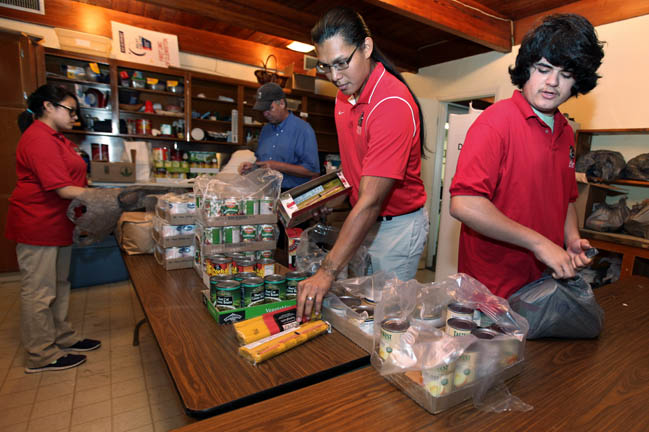 CLEWISTON — With year-end school requirements satisfied and summer vacation closing in, a handful of Ahfachkee School Student Council members gave up an otherwise lazy Wednesday to work for people in need.

Later, the crew helped carry heavy bags and cartons through pouring rain for the clients – mostly elderly and sick.

“They are an amazing group of kids and they are doing an amazing job,” said Charley Watts, pastor of First United Methodist Church in Moore Haven, as the helpers loaded his truck with goods to be distributed at his church 15 miles away.

“And for them to be here for no other reason than giving service to others is just great,” Watts said.

The service project was not eligible for community service point requirements, nor did it fulfill any school course requirements.

The Rev. John Hicks, pastor of the Clewiston congregation, said the Ahfachkee team arrived not only ready to work for free but also with a van filled with donations from Ahfachkee families. About 50 pounds of collard greens grown by Ahfachkee students and Traditional Preservation Department aide Maxine Gilke in the school’s garden were also donated.

Hicks said the pantry feeds about 600 families each month. Clients register for help based on need but the need is always greater than the amount of food distributed.

For Kaitlin, the demand and supply realization took her by surprise last year on the first day she volunteered.

“At first I looked around and thought, ‘Wow, this is a lot of food.’ I thought it was enough, but then it almost ran out. It’s never really enough,” she said.

A majority of goods come from the Harry Chapin Food Bank, which serves Charlotte, Collier, Glades, Lee and Hendry counties. In turn, Compassion Avenue shares with four or five other smaller pantries in Hendry, which is the poorest of the five with 80 percent of public school children on free or reduced-cost lunch programs.

Additional canned goods and dry items, including macaroni and rice, come from various collection efforts throughout the region such as the annual postal workers food drive.

“People can give anything they would want to eat. Most of the time they are generous. It’s not just beans and soup anymore,” Hicks said.

On May 28, pallets of corn, cantaloupes, cabbage and other fruits and vegetables were considered extra. Much of the fresh food was pooled by “gleaners” who are allowed to pick after big chain grocers take the cream of crops, leaving behind items that are too big, too small, overripe or not ripe.

Smith said off-reservation community service allows students to see how some struggle and gives them an opportunity to help.

“They get to understand why giving time, money and food is important,” he said.

Quenton said helping the food pantry is about giving back for Seminole generations past who, before the Tribe’s good business fortune, were recipients of food and clothing donations.

“Today, giving means a lot more to the Tribe. Before, the wealthy people gave to us. Now, we shouldn’t take anything for granted,” Quenton said.