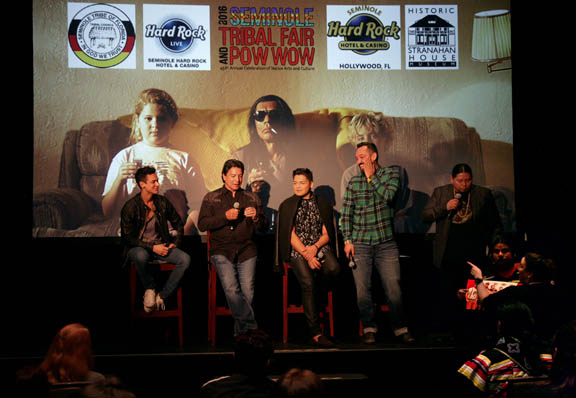 HOLLYWOOD — The long line of moviegoers waiting to enter Native Reel Cinema Fest served as confirmation to Everett Osceola that the two-day Native American film showcase could be a success.

“It was almost like a dream,” said Osceola, cultural ambassador for the Tribe. “That’s when I knew we put on a good show.”

With support from Councilman Osceola’s Office, Everett Osceola teamed up with Gordon Wareham and April Kirk to bring Osceola’s vision and passion for Native American representation in film to life.

“The response was great. We’ve fulfilled our goal of sharing Native American [art and culture] to a bigger audience,” said Kirk, executive director of the historic Stranahan House. “[Tribal Fair] helped introduce our [Native Reel Cinema Fest] to people who wouldn’t normally be able to participate in Native American culture.”

“It’s getting better and more diverse,” he said. “[Native Americans] are in roles that we’ve never had the opportunity to play.”

After previews of other Native works, the music videos “The Storm” and “Love of My Life” were shown.

In 2011, Judd approached Spencer Battiest at the Gathering of Nations Pow Wow and asked to direct a music video for the song “The Storm.” Shortly after, Judd collaborated with Seminole Media Productions to film the music video, which was shot in iconic Seminole locations throughout the reservations.

The video won Best Music Video at the 36th annual American Indian Film Festival and is played in Hard Rocks throughout the world.

“Working with him has been a great thing for our career,” Spencer Battiest said.

Osceola’s passion for cinema began in his childhood. He recalled fond memories of watching “Revenge of the Ninja” with his family at a drive-in.

“The movie [exposed] another world to me,” Osceola said.

Osceola wanted to see more positive and authentic portrayals of Native Americans in the film industry. In November 2014, he and Kirk hosted a well-attended Seminole Cinema Night to showcase Native American talent.

“The Exiles,” a 1961 film documenting the activities of a group of Native Americans during half a day, was shown at Stranahan House.

At the time, Osceola was in contact with Judd on an upcoming project he was working on. A fan of his past work with the Battiests, he signed on as an executive producer to what would become “Ronnie BoDean.” Wareham also signed as executive producer.

Known for his roles in “Dances with Wolves,” “The Last of the Mohicans,” “Avatar” and “Penny Dreadful,” Cherokee actor Wes Studi plays the eponymous Ronnie BoDean, an antihero who babysits the children of his jailed neighbor and teaches them “survival skills.” In an interview with the Oklahoma Gazette, Studi said he approved of the Ronnie BoDean character because he represented a more authentic portrayal of Native Americans.

Originally slated to be a graphic novel called “Six Pack and Gas Money,” “Ronnie BoDean” turned into a short film project. It has been shown at events throughout the world, including Germany, Paris and Toronto. Judd hopes “Ronnie BoDean” will become a feature film or TV series.

“It feels good to feel validated. When I was growing up, I didn’t see anyone that looked like me,” Judd said. “My uncles and people I know are rough around the edges, so I wanted to have a character that represented that.”

“We’ve come a long way; we have a long way to go,” Battiest said. “But we need to stand out more in the mainstream media.”

Plans are already in motion to make Native Reel Cinema Fest bigger and better next year, Osceola and Kirk said.

“Film is very important and universal,” Osceola said. “The best people who can tell our stories are us. Film has brought a lot of awareness to me. We are conserving history and conserving language.”