Julia Smith and Raeley Matthews led a furious comeback for Okeechobee, which erased an 11-point halftime lead and pulled out a 54-50 win.

Smith is only a freshman, but she played with the poise and smarts of a varsity veteran as she dished out three assists and made a layup during a critical juncture of Okeechobee’s comeback.

“She’s an all-around good player,” said Okeechobee coach Joe Smith. “We’re glad to have her with us. She listens well and she plays her heart out and that’s all I can ask the girls to do at the end of the day.”

A steal and assist by Smith put Okeechobee up 43-41 with six minutes left in the game. Her layup late in the game gave Okeechobee a 47-46 lead. She finished with eight points.

“When she has the opportunity to score, she does,” coach Smith said. “She stepped right in at the shooting guard position and she’s owned it.”

Matthews led Okeechobee with 18 points. She made a couple of key steals in the final minutes, but it was her streak of six consecutive unanswered points late in the third quarter that gave Okeechobee a three-point lead going into the final quarter.

“Raeley is the foundation of our program. Everything is built around her,” coach Smith said.

When Raeley fouled out in the final minute, Caroline Sweat came off the bench to finish up the job.

“Caroline is doing real good. She played at Moore Haven before. She’s a small forward, and she can play forward. She doesn’t shy away from shooting the ball,” said coach Smith, whose team improved to 6-1.

The Okeechobee rally came despite a determined effort from Moore Haven, which was playing its third game in as many nights.

Moore Haven was sparked by senior Sydnee Cypress, who led all scorers with 23 points. On a few occasions, after making a basket, Cypress immediately flashed her defensive skills by picking off passes that set up more scoring opportunities.

“Sydnee is my leader. She’s what makes us go,” Lewis said. “She keeps going. We ask a lot of her.”

In addition to Cypress, Moore Haven’s offense revolves a lot around the guard play of Sunni Bearden and Alicia Fudge. That trio combined for all but four of Moore Haven’s points. Alicia scored 14 and Sunni had nine.

“Sunni is doing real good. She’s still growing and learning the game. She shoots the 3-ball real well,” Lewis said. ““It may not show up in the box for scoring, but [Alicia] makes good decisions that help us out.”

Moore Haven has also received contributions from Aleina Micco and Martina Herrera this season. Micco scored two points against Okeechobee and at times handled the point guard duties. The Terriers won four of their final five games before the Christmas break. 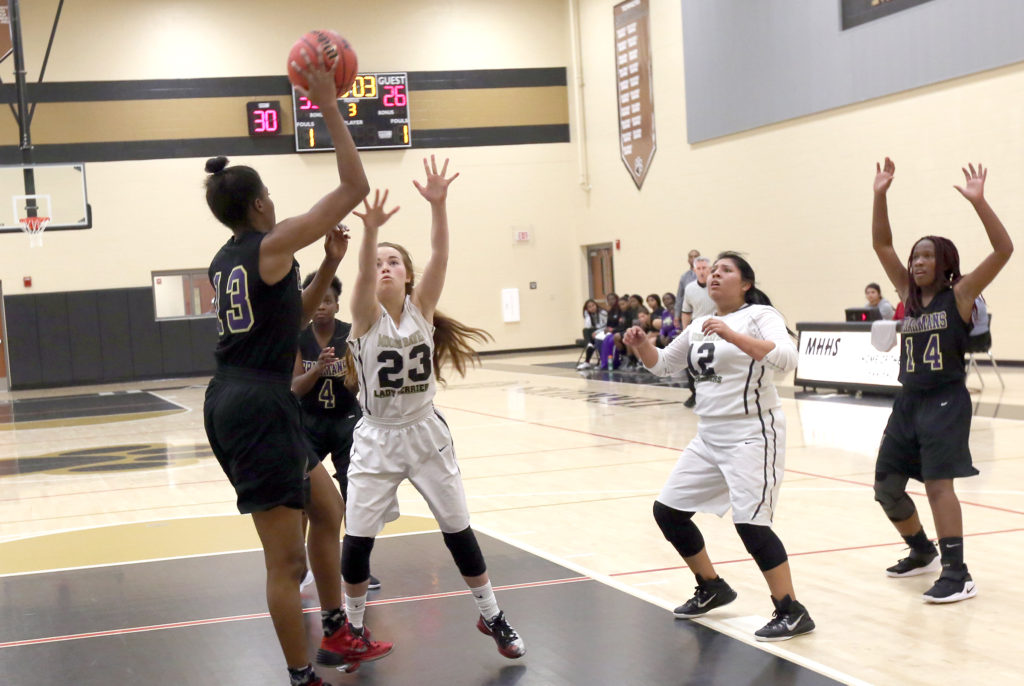