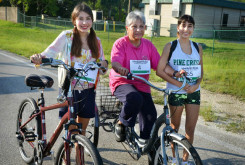 BIG CYPRESS — The lasting legacy of beloved Tribal member July Billie, of the Otter Clan, was clearly evident July 19 at a community event to mark the anniversary of his death.

July was fondly remembered just days from what would have been his 40th birthday.

The fitness buff, on the cusp of a career in sports therapy when he passed July 31, 2013, was memorialized with the inaugural Big Cypress Bike Rally.

More than 50 Tribal members trekked out on two- and three-wheelers for the nearly 4-mile event hosted by July’s mother, Hannah Billie, and sponsored by the Health Department.

Hannah said her daughter, Lisa Billie, suggested that the two hold an annual event to remember their loved one, the father of daughters Braudie, Tia and Brianna Blais-Billie.

Allied Health program manager Suzanne Davis helped create the fitness-themed event. July was an avid cyclist who shunned driving a car and employed his bicycle as his only form of transportation.

“My son rode a bike every day wherever he went, even the 14 miles he took to classes at school. He always made sure his arms and legs were strong and that his body was in good shape,” Hannah said.

Hannah said her son was passionate about teaching other people how to take care of their bodies. He valued his friends and family – mostly his daughters.

But July lost his battle against an enemy.

“He struggled with alcohol. He admitted himself to treatment because he knew it was a problem. It was a problem that in the end he did not win,” Hannah said.

“My son was about to get his sports therapy license. He always wanted to share what he learned so that is how we will keep his memory alive,” Hannah said.