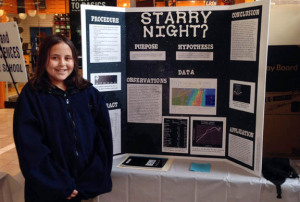 “I chose it because it’s an important subject that most people don’t know about,” Valholly, 12, said. “My classmates and my teachers were very surprised how it affects us. I found out nobody in the city knows what it is. They really liked my project and learned something from it; I was very happy about that.”

For the project, Valholly monitored the night sky and measured light pollution at 15 locations between Markham Park in Broward County and Billie Swamp Safari in Big Cypress. She borrowed a Sky Quality Meter from an amateur astronomer to measure the light.

Valholly was already familiar with light pollution and light domes, where light bounces off particles in the air and creates a bright area far from the light source. She gave as an example the one she sees when she travels east toward the city from her Big Cypress home.

The two darkest locations she measured were in Big Cypress; one is a mile past Billie Swamp Safari and the other is located at the cow pens off Snake Road. The brightest place Valholly measured was Markham Park.

“One negative effect of light pollution is on wildlife. For example, hundreds of birds are killed each year from hitting buildings in cities when migrating. Birds rely on stars to guide them when migrating, but migratory patterns are affected when street lights shine upwards making the stars invisible to the eye. They then hit glass and get hurt or die. Some birds get confused when flying and if they do survive, most will lose track and head in the wrong direction,” she wrote.

According to the International Dark-Sky Association, human-produced light pollution threatens astronomy, disrupts ecosystems, affects human circadian rhythms and wastes energy. Valholly stated in her project that “three-quarters of people in cities have never experienced a clear, dark night sky and all its wonders.”

“Kids are unaware of the sky; they don’t see it,” said Rhonda Roff, Valholly’s mother. “When they do see it, it’s a wow moment. Kids don’t know what they are missing. I think she brought the subject to the city.”

Valholly qualified for and showed her project at the Broward County Regional Science and Engineering Fair from Feb. 5-8 at Westfield Broward mall. She didn’t win, but she said she enjoyed seeing the other projects on display.

“I love science,” she said. “I’m always experimenting and doing little tests, sometimes on people. I test their limits and how they react to something, like the outside temperature and how it affects people depending on where they live and their age.”

Valholly said she would like to pursue science as a herpetologist, a biologist who studies amphibians and reptiles.

“I’ve always loved frogs and have been intrigued with how many different kinds there are and how they use different strategies to protect themselves,” she said.