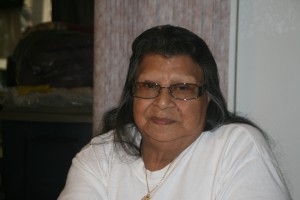 IMMOKALEE — A pacemaker, artificial knee, diabetes and arthritis may have slowed Rachel Billie down, but she is a long way from coming to a stop. Sitting at her sewing machine, this energetic 76-year-old recalled how she once sewed to feed her children and to keep a roof over their heads, but now she sews as a labor of love to put clothes on the backs of those same children and their offspring. Creating intricate Seminole patchwork patterns is a part of her daily therapy.

Rachel was born in the woods a short distance from Everglades City near the intersection of U.S. 41 and State Route 29, currently called Carnestown, on May 10, 1936. The youngest of five children belonging to Charlie Billieboy and Annie Billie, she is a member of the Panther Clan.

The 1930s and 40s were a transitional period for the Seminole people, and Rachel spent her early years living the traditional camp lifestyle off the land while her family adapted to economic, social and environmental change. Her father frequently drove the car for Deaconess Harriet Bedell as she made her bimonthly rounds of the camps along the Trail, administering to the sick, teaching the children and helping the women with the production and sale of their crafts.

Riding in the old car was always a wonderful adventure, but this wasn’t their only transportation. Rachel has vivid memories of trips in her father’s dugout canoe to visit cousins deep in the Everglades when the water was high and the mosquitoes were as thick as clouds in the sky.

During her early years, Rachel’s family moved around a lot following seasonal work in the tourist camps and fields. They would journey as far north as the Silver Springs attraction in Ocala with Charlie Cypress and then return to Big Cypress and Ochopee in time to work in the vegetable fields.

“I was small, but I remember my mother and aunts teaching me how to put my hair up in the traditional style while we were in Ocala,” Rachel said. “We dressed up every day so that the tourists could come and watch us as we lived in the village. I used to watch the crowds gather around to see Bobby Tiger wrestle alligators when we stayed in Miami.

“We learned to work when we were very young,” Rachel continued. “I watched my mother sew and make baskets. When she would move off to cook and do things, I would climb up to her old hand-crank sewing machine and try to make stuff. It was fun, and she encouraged me when she caught me trying to sew.”

Lacking babysitters, whole families went to the fields, and the youngsters followed their parents up and down the rows of tomatoes, learning to pick the produce in the fields at Ochopee and near Big Cypress. Following the seasons and work, they set up temporary camps wherever they went.

“When I got older, I used to look around Big Cypress trying to find the place where we lived, but everything had changed so much,” Rachel said. “One day, Jimmy Cypress told me that I couldn’t find it because the clinic has been built on our old camp. About 1948, we moved to stay in Sunniland to be close to the farm work in Immokalee and Fort Myers.” 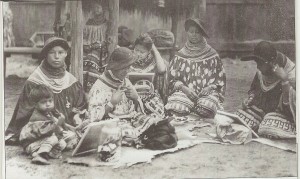 Rachel is the mother of six children: Vincent, Frances, Michael, Miriam, Allen and Kattiria. Like most Seminole women of her era, she began having her children when she was quite young and devoted her life to hard work in an effort to raise them.

Despite a seminomadic lifestyle, she kept all of her children in school as much as possible so they could have the education that she did not receive but recognized as a necessity for their successful survival.

“I owe a great deal to Ethel Frank,” Rachel said. “She was in charge of the Immokalee community and helped me get a place to stay with my kids so that we didn’t have to travel around so much. First we stayed across the road, and then she helped me to get one of the HUD houses. It was the first permanent house we ever had, and it is still my home. She encouraged me to sew and make baskets and found a way for me to sell them to support my family when there was no field work.”

“When people ask about religion, I tell them that God has always been a part of my people’s culture and I was raised listening to stories about Jesus,” Rachel said. “There is only one God and he gave us life, brought us to this place and helped us to survive. I respect the beliefs of my elders and always go to the Corn Dance to worship him in their way, but I also believe in his son, Jesus, and worship as a Christian. Keeping our culture and heritage alive is very important.”

“I have a lot of grandchildren and several great-grandchildren, and I talk to them in my language so that they will know it,” Rachel said. “I encourage them to go with me to Corn Dance to keep the ways of our elders alive and remember who they are and where they came from.”