Skip to content
You are here
Home > Education > Kids accept D.A.R.E. for no drugs, no violence 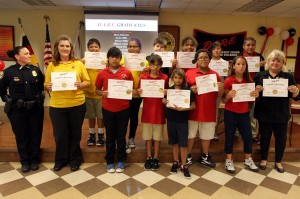 BIG CYPRESS — For 39 Ahfachkee School participants of the 2013 D.A.R.E. program, standing up against drugs and violence is a no-brainer.

“It’s the best way to never have a miserable life,” said fifth-grader Ricky Garza. “It’s about making the right choices.”

Established in 1983, the international Drug Abuse Resistance Education program is conducted annually in thousands of elementary schools worldwide by local police officers for kindergarten, third- and fifth-grade students.  It is geared to prevent drug use, gang membership and violent behavior such as bullying.

“You’ve been given skills to go out into the world where you will be challenged as you get older . . . if you are ever faced with making those hard decisions you can always come back to the lessons you were taught in D.A.R.E.,” Short told the graduates.

But first, kindergarten and third-graders performed choreographed D.A.R.E. cheers for an audience of nearly 50 family members, teachers and other students gathered for the celebration.

And special recognition awards were bestowed.

Kindergarten was applauded for elaborately decorating doors in the D.A.R.E. theme and third-grader Edie Robbins was named the winner of the third-grade D.A.R.E. essay contest. The fifth-grade essay contest award went to Carlee Billie.

“(D.A.R.E.) was the greatest lesson ever learned in school, besides math, reading and science,” Carlee wrote. “I love D.A.R.E. and I promise with my heart to always be drug and violence free.”

Kindergarteners learn about stranger danger. Third-graders focus on bullying. In fifth grade, students get information about tobacco, alcohol and drugs (consumed and inhaled) and how the chemicals affect human lives.

Jason Huckabee, whose son Craig graduated from D.A.R.E., said parents appreciate the in-school program but must bolster the anti-drug and violence message at home.

“I tell my son if your friends are doing something that you have been taught not to do, then it is wrong. You should speak up. You should leave,” Jason Huckabee said.

Graduates capped the event by performing a D.A.R.E.-themed rap tune to the beat of Will Smith’s Fresh Prince of Bel-Air. The kids also showed a music video of the rap which was taped with help from professional videographers on the school’s playground.

Leilani Gopher and Ricky Garza agreed that making the video was a chance to have a little fun with a very serious topic. Ricky hopes to see the video on YouTube.

“Even though we had to do three or four takes, we needed to make the video and put it out there,” Ricky said.

Leilani said it could be a message of life or death.

“Some people in our own community died from taking drugs, alcohol and tobacco. We know it can kill us,” Leilani said. “The song helps us teach other kids to just don’t do it.”