OCALA — The grand opening of the reconstruction of historic Fort King, which played a large role in Seminole war history, attracted hundreds of visitors to programs in late November and early December.

Fort King, in Ocala, is steeped in history. It was designated a National Historic Landmark in 2004 by the Department of the Interior for its significance as both the U.S Army Southern Command during the Second Seminole War and the site where U.S. Indian Agent Wiley Thompson and Lt. Constantine Smith were killed by Osceola and a group of 80 warriors on Dec. 28, 1835. Earlier that day, two companies of soldiers dispatched from Fort Brooke in Tampa were ambushed while on their way to reinforce Fort King. Chief Micanopy and his band of warriors killed 106 soldiers in a surprise attack known today as the Dade Massacre. These two events ignited the Second Seminole War.

Fort King had humble beginnings. The first construction near the site was the first Seminole Indian Agency in 1826. In March 1827 Fort King was constructed to administrate the Treaty of Moultrie Creek which relocated Seminoles to an expansive reservation in Central Florida. The treaty was supposed to protect the Seminoles from trespassing settlers as well as promote wilderness law and order for a period of 20 years. By 1829, a deepening recession forced the Army to abandon Fort King because of severe budget cuts. With the soldiers gone, the Seminoles continued to go on about their lives and never disturbed the fort.

In 1832 times began to change as Andrew Jackson summoned the Seminole leaders to Payne’s Landing and coerced their signatures on the newly drafted Treaty of Payne’s Landing which ordered all Seminoles out of Florida in compliance with Jackson’s Indian Removal Act, passed by Congress and signed by Jackson in May of 1830. By June of that year Fort King was re-garrisoned. This time the troops and new Indian agent Wiley Thompson came as hostile enforcers of the Treaty of Payne’s Landing. Instead of being seen as protectors, the soldiers now became the symbol of hate and oppression for the Seminoles.

Osceola was no stranger to the fort. In 1834 he made his first appearance at Fort King as a participant in talks held there between the U.S. government and the Seminoles. Osceola rejected the orders to leave Florida. He opposed emigration to the west and threatened war unless the Seminoles were left alone.

After the events on Dec. 28, 1835, the ensuing Second Seminole War featured many notable army generals stationed at Fort King. Unable to win against the guerrilla warfare tactics of the Seminoles, the U.S. forces abandoned the fort once again by May of 1836. The Seminoles returned and burned the fort to the ground that summer.In 1837 the fort was rebuilt. The Army returned as the Army of the South where soldiers launched unrelenting search and destroy missions against the Seminoles. In 1842 the war ended and the fort was once again abandoned. The fort was transferred to the people of Marion County where it served as the county’s first courthouse and public building.

In 1837 it was dismantled for its lumber. The new courthouse was moved to the new city of Ocala.

In July 2016, after years of planning, fund raising, grant applications, and acquisitions, enough money and willpower were raised to reconstruct Fort King. In December 2016 the first re-enactment of ‘The Killing of Wiley Thompson’ took place. In April site preparations were begun, logs began to arrive and the reconstruction of Fort King began in earnest. In May a groundbreaking ceremony was held which included a contingent from the Seminole Tribe of Florida. In September, Hurricane Irma barreled over the site. The chickee constructed by Daniel Tommie in 2016 stood strong on the edge of the hammock and didn’t lose a single piece of thatch.

The recent re-enactment was the second time this event had taken place and the first time it took place with the newly reconstructed Fort King.

Fort King is the centerpiece of the 37-acre site and dominates the landscape. The site is surrounded by dark hammocks much like it would have been in 1835.

The re-enactment and grand opening drew visitors from the area and many more from across the state and the country. Marion County, the City of Ocala, and the park officials take a great deal of pride in the park and its history. An expansive and easy-to-access parking area made it easy to access the events via a courtesy shuttle that ran continuously. Many vendors were located near the entrance and provided books and information about the history of the site as well as the Seminole wars. Others offered academic research and information about ongoing projects throughout the state.

Pedro Zepeda demonstrated traditional dugout canoe-making for the curious. Charlie Osceola, from Big Cypress Martial Arts, conducted a hand-to-hand combat demonstration that featured Seminoles and real weapons. The only casualty was a bump on the head of Quenton Cypress. Also on display were a period settlers camp, an Army camp and a Seminole camp. A fully functioning blacksmith shop on a trailer kept visitors riveted as tent stakes were manufactured on site. The Fort King interpretive was busy throughout the day with an informative film that ran continuously. In addition to the makeshift theater inside, there were display cases filled with site artifacts that reflected life at the fort.

The re-enacted battle began with an assault from the woods by the Seminoles. Warriors attacked with knives and rifles after they caught Thompson and Lt. Rogers outside the compound on an afternoon stroll. They were both killed trying to get back to the fort.

True to the historical account, a few settlers made it into the fort and the gates were closed leaving Thompson, Rogers and other individuals dead in the grass outside the gates. Their bodies remained there for a period of time as those inside didn’t realize yet that they hadn’t made it back inside. When Thompson’s body was recovered it was discovered that he had 14 bullet holes in him along with a deep penetrating knife wound to the heart. 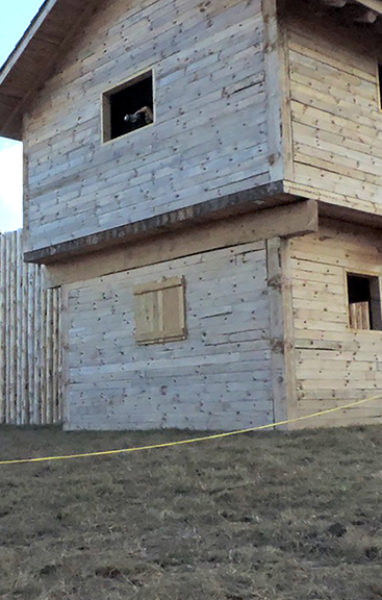 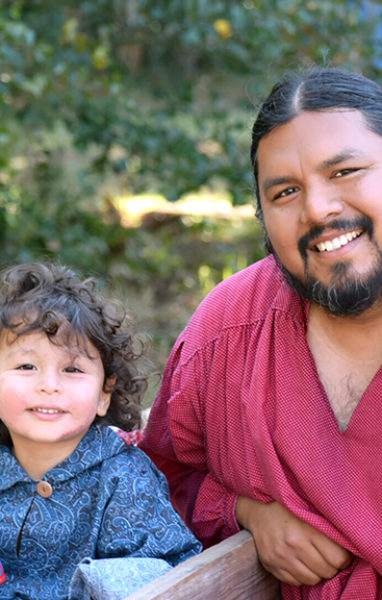 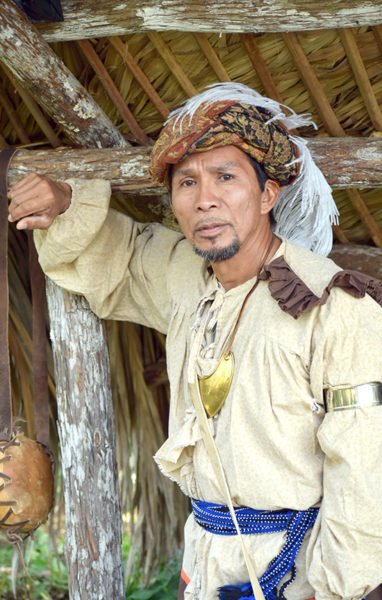 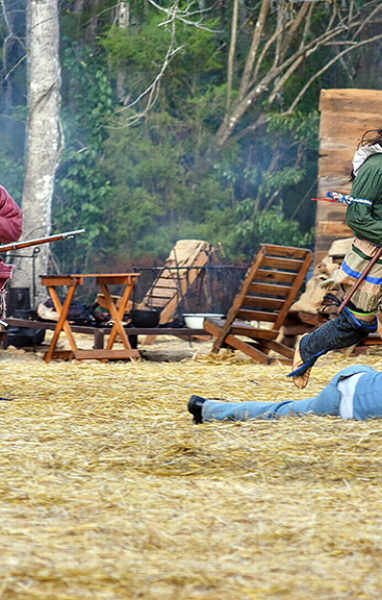 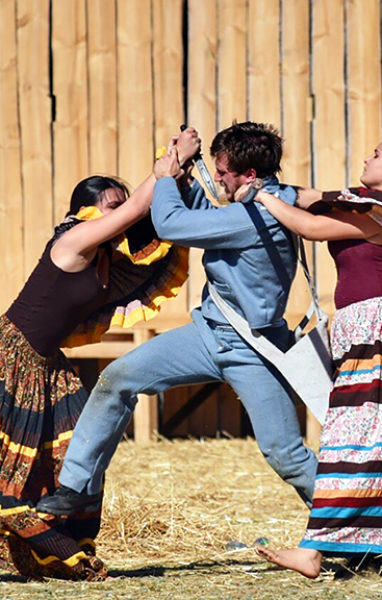 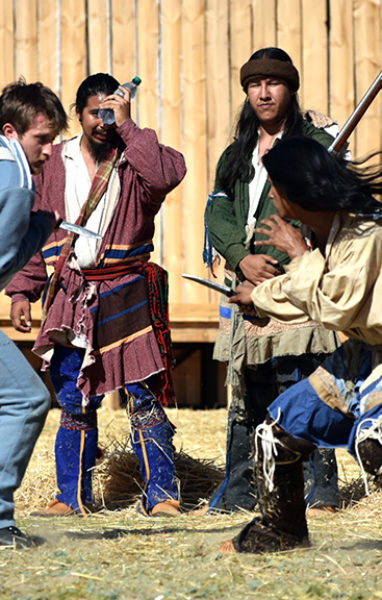 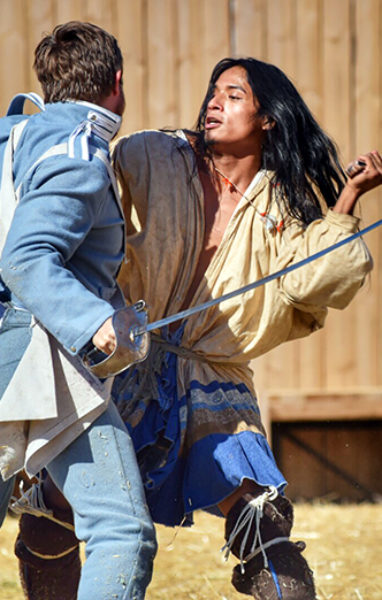 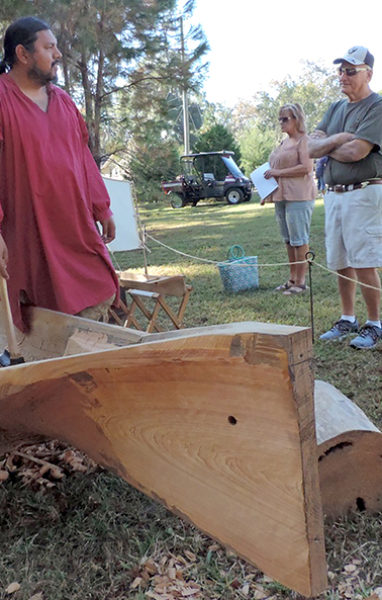 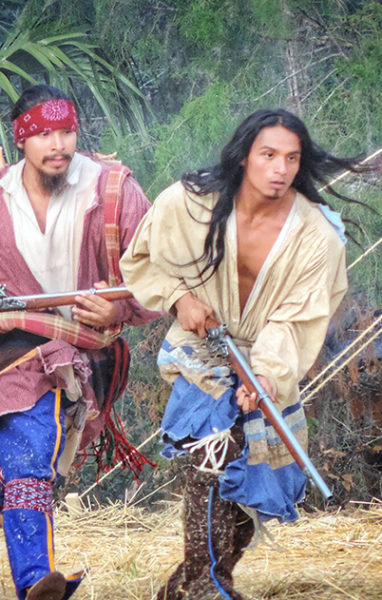 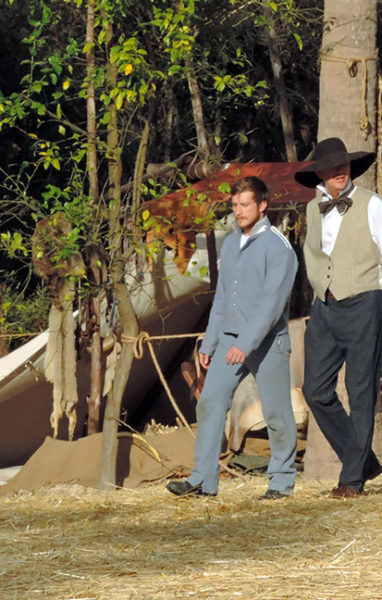 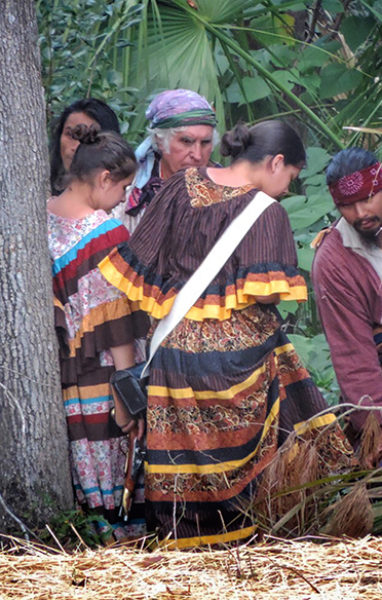 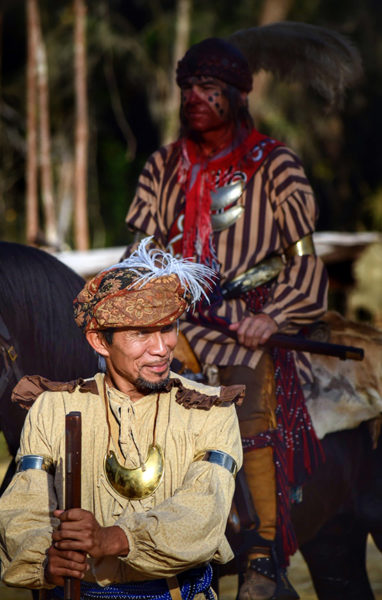 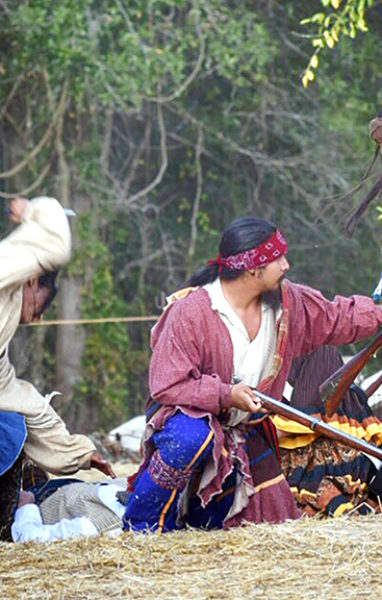 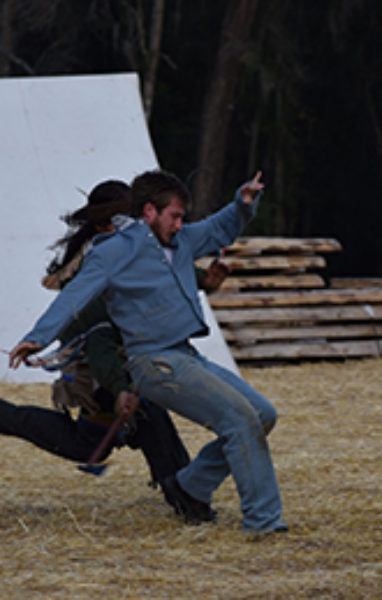