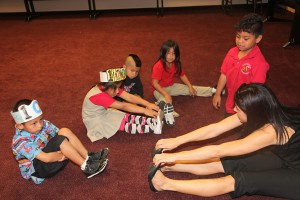 The Tribe’s Health Department collaborated with both the Big Cypress Library and the Ah-Tah-Thi-Ki Museum to promote healthy living habits for Tribal youth.

On Jan. 31, staff from the Health and Library departments hosted a youth health event, titled Kids Hip to be Fit, at the Frank Billie Tribal Field Office’s Learning Resource Center.

The hour-long event, in which eight Tribal and community youngsters from the Ahfachkee School’s Boys & Girls Club took part in, highlighted the importance of exercising daily and eating healthy snacks.

“Teaching them in a fun manner allows for them to get excited about eating healthy and exercising,” Kimberlain said. “Their hands-on involvement in making the snacks created a sense of pride for them, in that they shared with all the other kids the snack they had made. But even more than that, they got excited about the food, and the food was healthy! They wanted to know if they could have more. Who wouldn’t want to see a kid excited about eating celery?”

Leatrice Cypress, the mother of Boys & Girls Club participant Markayla Cypress, spoke of her impressions of the Kids Hip to be Fit initiative.

“This exercise taught me and my daughter to eat healthy,” she said. “I want her to live a long life because I would like to see her healthy for a very long time.”

Benefits from eating healthy and exercises on a daily basis include a higher level of self-esteem and a lower risk of diseases such as high blood pressure and diabetes.

The Health and Library departments would like to collaborate on more events of this magnitude every three to four months, Kimberlain said.

Meanwhile, the Health Department has taken the health initiative a step further by partnering with the Ah-Tah-Thi-Ki Museum for a separate venture: the formation of the exhibit Through the Eyes of the Eagle: Illustrating Healthy Living for Children.
The exhibit features an array of original Native American watercolors and aims to guide children in selecting healthy living choices.

Based on a series of Eagle books written by Georgia Perez and illustrated by Patrick Rolo, of Bad River Band of Ojibwe, Wis., and Lisa A. Fifield, of Oneida Tribe of Wisconsin, the new exhibit will also show how Native Americans have shared health stories for thousands of years in an effort to pass on their knowledge, history and culture to their descendants.

The Centers for Disease Control and Prevention developed the series and exhibit in collaboration with the Tribal Leaders Diabetes Committee and Indian Health Service.

“My hope for the exhibit is that it will spark an interest in Tribal youth to put down the game controller and head outside to play and move their bodies in a healthy direction,” said Ah-Tah-Thi-Ki Museum Exhibits Manager Greg Palumbo.

Seminole Health Director Connie Whidden served as the guest speaker for the Feb. 10 grand opening, which was held at the Ah-Tah-Thi-Ki Museum in Big Cypress.

The traveling exhibit, which will be on display until May 28, is open to Tribal citizens, community members and the general public.
For more information on the museum, visit www.ahtahthiki.com.