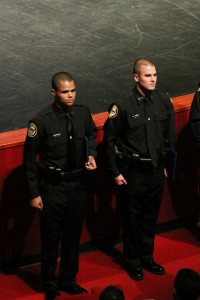 DAVIE — The 284th Police Academy class graduated from the Institute of Public Safety on Dec. 5, and among the graduates were two new officers of the Seminole Police Department.

Michael S. Sprouse and Joshua L. Williams underwent 770 hours of training over a six-month period in the areas of physical, academic and firearms training to earn the honor of serving in law enforcement. During the ceremony at Broward College’s Central Campus, Seminole Police Chief William Latchford presented the officers with their SPD badges.

For Sprouse, entering law enforcement was an easy choice. He’s had an interest in the field since his childhood and always had a desire to serve the public. Despite the demands placed on him and his fellow cadets during the academy, Sprouse thrived. He served as his class treasurer – a position his class elected him to – and earned the runner-up title in academic proficiency with a grade point average of 97 percent.

“The police academy was very nerve-racking the first day,” Sprouse said. “I can remember showing up and not really knowing anyone. We were able to bond and stick together. We came together and accomplished our goal.”

Williams, too, always considered a career in law enforcement. He said he looked up to a friend’s father who was in law enforcement and was interested in a career that protects and serves. The Police Academy gave him that chance. Although he didn’t know the other 14 cadets in his class, he quickly developed bonds with them all.

“We turned out to be brothers and sisters,” Williams said. “The best part was the camaraderie and getting to know each other.”

Broward County Commissioner Chip LaMarca addressed the class during the graduation ceremony, encouraging the cadets to remember the reasons they took the job: to protect family, friends and neighbors.

Both Sprouse and Williams will serve on the Hollywood Reservation, and they look forward to the experience.

“That’s one of the greatest benefits of working with the Seminole Department,” Sprouse said. “It’s such a small department and a close-knit community that they’re there to support you. You’re not just a number in the department; they know you by name.”