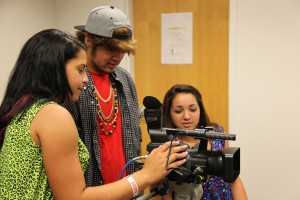 HOLLYWOOD — About a dozen Tribal youth caught an inside view of the media industry and how it operates during the sixth year of the Seminole Media Productions Workshop (SMPW) held at the Native Learning Center from July 23-27.

With the help of SMP staff, youth had the opportunity to learn the basics of writing, interviewing, reporting, photojournalism, broadcasting, editing, production, filming and graphic design.

The students had a choice of pursuing the graphic design (new to the curriculum this year), newspaper or broadcasting track based on their interests. They worked on individual projects throughout the week and presented them at the conclusion of the workshop.

“It’s a hobby for me and something that interests me,” participant Ricky Joe Alumbaugh said. “I like [the workshop] a lot. It was fun. I learned a lot about Photoshop and stuff I didn’t even know.”

“I hope it makes them more enthusiastic about furthering their education beyond high school,” she said. “They learned so much and picked it up so quickly.”

The broadcasting group, which had the most participants, learned about editing, the production process and video camera basics like shooting techniques, audio and lighting. The youth chose from three topics for their video projects: “Lost Languages,” “I am Unconquered” and “Red Barn.”

For the “Lost Languages” project, participants filmed Tribal members and asked questions about their Mikasuki and Creek languages. For the “I am Unconquered” project, the students filmed Tribal members reciting that phrase for the purpose of promoting the Seminole Tribe. And for the “Red Barn” project, they gathered information for a PSA about the Brighton Red Barn. Participants honed their interviewing, shooting and editing skills throughout the week.

Second-year participant Tori Osceola said she enjoyed the workshop because it gave her hands-on experience in a career she may want to pursue. She said she likes the camera, whether she’s singing on stage in front of the camera or interviewing someone from behind it.

“I take it very seriously when I come to SMPW each year,” Osceola said. “I wanted to learn the backstage and how it all comes together. I am interested in media and see it in my future.”

Seminole Channel staff selected three projects to air during their Aug. 14 show, as well as on their YouTube channel: “I am Unconquered” by Osceola, “Lost Languages” by Leissett Baker and “Red Barn” by Joseph John.

The youth also got real-world media insight from visits to the mega broadcast group Clear Channel Media and Entertainment, local print company ID Print, and the Hard Rock Live, where they took a backstage tour. They also had the opportunity to ask questions to Sun Sentinel sports columnist Mike Berardino and University of Florida journalism professor Ted Spiker.

To end the workshop, each group gathered in the Tribal Headquarters lobby in Hollywood, where they displayed their projects for their families and friends.

“If you have an interest in media, you should definitely take advantage of this program because it’s awesome and definitely helps you out in learning about what goes into media production,” SMP cohost and workshop participant Meredith Bullard said. “It’s good to get that hands-on training.”

Many agreed that this year’s workshop was a success, filled with inside knowledge of media. SMP staff hope the workshop sparked participants’ interest so they will come back to intern with and work for the Tribe.

“A lot of kids this week discovered talents they didn’t even know they had,” Newcomb said.